GAME OF THRONES renewed for a fourth season

Surprising no-one, HBO has renewed Game of Thrones for a fourth season. The news came after it was revealed that the Season 3 debut had scored 4.4 million viewers, an all-time series high. The high ratings were not expected, as the show was airing directly opposite the Season 3 finale of The Walking Dead (which also garnered an all-time series high of 12 million viewers; The Walking Dead airs on AMC, which is more widely available in the USA than HBO). 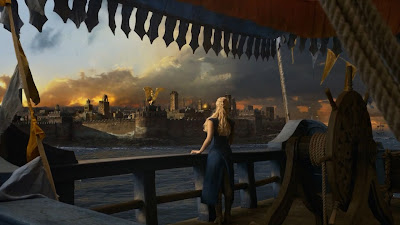 Dany gets to hang around Slaver's Bay for a while longer.

Further information was not officially announced. However, based on comments by showrunners and other personnel, we know that Season 4 will again comprise 10 episodes and will largely be based on the latter parts of A Storm of Swords. It is unclear how much material will also be drawn from A Feast for Crows and A Dance of Dragons (the fourth and fifth novels take place concurrently, both overlapping with the end of the third novel). The climax of Season 3 appears to be an event that actually happens two-thirds of the way through Swords, and there are sections of the fourth novel which chronologically take place during the latter part of the third. Showrunners David Benioff and D.B. Weiss are certain to return, having signed a two-year contract before beginning work on the third season, and it is anticipated that George R.R. Martin will again be scripting one episode.

One tidbit that is known about the fourth season is that it will feature a battle that will dwarf the Battle of the Blackwater at the end of the second, and the producers are anticipating interesting discussions with HBO on how they film it. My personal view is that they should definitely call back Neil Marshall, who gave them a lot of bang for their buck with Blackwater.

Whilst we don't know what characters from the books will be brought into the show, fans are confidently expecting the casting of (at the very least) Prince Oberyn Martell and Lord Mace Tyrell. New locations to appear in Season 4 will likely include the city of Meereen.

Other recent info that has come out about the show indicates it is now HBO's most profitable series, also selling more DVDs and Blu-Rays than any of their other series. Sales of Thrones merchandise also make up more than 75% of all merchandising sales for HBO. With figures such as this (and the fact that Thrones allegedly makes more than 50% of its budget back immediately through foreign rights sales alone), HBO's decision is unsurprising. Indeed, some industry-watchers were even predicting a two-season renewal notice, allowing the producers to more efficiently segue from one season into the next, but HBO elected not to do this, at least not this year.

This is great news! Doesn't really surprise me. The Walking Dead vs. Game of Thrones argument is invalid because here in the states AMC comes with basic cable packages whereas HBO is an additional 15 bucks a month for me.

Very cool, and unsurprising, as you said!

It's unsurprising now. But had you told me at the beginning of this series that it would be such a mainstream success that it would be renewed for a 4th season without a second thought, I'd have been giddy with surprise.

I remember when it started I posted some question on here about what would happen if the series caught up with the books and the consensus was (correctly) that it would be a mistake to assume ANY show would get to the point where that would matter.