The cover art for the seventh volume in the Chung Kuo series, The Broken Wheel, has been released: 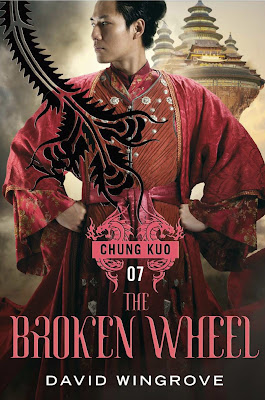 The book is due for publication in November. The sixth volume, An Inch of Ashes, (cover art here) is out on 4 July.

Interestingly, Corvus are also listing an e-book called Chung Kuo: The Epic Begins for release on 4 July. It appears to be an omnibus edition combining the third and fourth books in the series, The Middle Kingdom and Ice and Fire. Exactly why you'd call an omnibus The Epic Begins and then start with Book 3 is a bit beyond me, but omnibus e-books seem like a great idea, as the individual volumes have been fairly short so far (which I know has put off some people from trying the recast version of the series: £18 for 250 pages in hardcover has raised some eyebrows).

UPDATE: An e-book omnibus of the first two volumes has indeed appeared on Amazon, entitled The Rise of China, which combines Son of Heaven and Daylight on Iron Mountain. It is due for release on 2 May.
Posted by Adam Whitehead at 15:57

the omnibus of the first 2 books is listed on amazon.uk for releases in may:
http://www.amazon.co.uk/dp/B00BHWT4KC/

the first omnibus "the rise of china"

is already up on amazon.uk for release in may

Wert, actually there is prequel "omnibus" for kindle

I know the history and how the reissue of the books are. That being said, the third book only has prologue and then fourth book only has epilogue. And the news of "omnibus" releases. I have decided to wait until each of "omnibus" comes out. I was waiting for 6th to come out before starting on 5th.

Shame it's taking too long for each volume to be released. frustrating! Corvus need to rethink the release strategy.