News has broken that Gene Wolfe's Book of the New Sun is to become a series of blockbuster Hollywood movies.

The four-volume series - actually one long, sustained novel split into four volumes due to length - is widely-regarded as one of the pinnacles of science fiction and fantasy literature, once described by The Guardian newspaper as SF's answer to Ulysses. A dense and complex tale, The Book of the New Sun follows the journey of a torturer, Severian, across a fantastical landscape to a distant city. Along the way he becomes a powerful figure, and the book suggests that Severian is an unreliable narrator who is changing aspects of his story for unknown purposes. The series has inspired significant discussion of its themes and complex characterisation since it was first published in 1980-83.

Handling the movie version will be veteran Hollywood director Michael Bay. Despite being best-known for his action movies featuring numerous and impressive explosions, Bay claims that the films will be extremely faithful to the books, and he will not sacrifice the books' subtle narrative aspects in favour of spectacle. "Plus I'm never going to get that Best Picture Award if I keep making films about Marky Mark talking to Optimus Prime, you know what I'm saying?"

Author Gene Wolfe has reported that he is happy with the script he has read, acknowledging that of course some changes are to be expected to make the dense work a better fit for the big screen. "Although I must admit I was initially unsure about the scene when Severian salvages an ancient helicopter gunship equipped with rotary laser miniguns and uses it to engage in battle with triple-headed mutants, Michael explained to me the deep thematic resonance of how the scene reflects the inherent nobility of the human spirit. Or something." 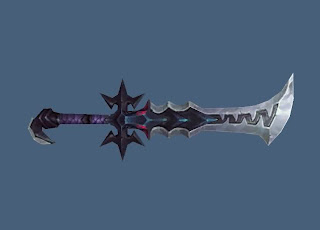 Early concept art suggests the film will feature a 'fresh interpretation' of the sword Terminus Est.

Bay confirms that Wolfe has been consulted at all levels of the project, including casting. "For the role of Severian I was initially considering Taylor Lautner, but Gene was determined that we get an experienced, method actor who could really embody the role's complexity. We compromised on Jack Black."

Black confirmed that he did, "Not have a f*****g clue what is going on," in the script but took the project on because the books' artwork "Totally looked like heavy metal album covers."


The Book of the New Sun: The Shadow of the Torturer will be released in cinemas the day after hell freezes over.
Posted by Adam Whitehead at 02:28

Email ThisBlogThis!Share to TwitterShare to FacebookShare to Pinterest
Labels: gene wolfe, michael bay, no not really, the book of the new sun, wtf

Ok, you got me.... The first thing I thought was, "Wow...someone has their work cut out for them." Then I read that person was to be Michael Bay and I thought, "Oh dear God, no!"

Well played sir, I was enraged until I chuckled at Jack Black playing Severian

Pretty disappointed. My first choice would be Uwe Boll, Orlando Bloom as Severian and, of course, the script by Damon Lindelof, he did a wonderful job in Prometheus.

It is not yet the 1st in California so I read most of the way through before catching the joke.

as for Mr. Bay....
"Those aren't ideas! Those are special effects!"
"I don't understand the difference"
"I know you don't"

Not too shabby Wert... *golf clap

I got you at Michael Bay, you basterd :-)

Interesting. But what I'm really waiting for with bated breath is Robert Stanek's novelization of the movies.

Got me too, until the Bay quote. Takes himself far too seriously to make that sort of comment.

Well played, indeed. My first response was "what the hell just happened to my eyes?"

I suspected it was a genuine post and when you listed Bay as the director I was even more excited. Few directors EXPLOSION bring so much EXPLOSION to the table EXPLOSION as Bay EXPLOSION does, he's got the EXPLOSION appropriate EXPLOSION ASS SHOT subtle ASS SHOT touch GREAT DIALOGUE to handle Wolfe's literary EXPLOSION masterpiece.

Call me stupid but you had until then.

You lost me a Michael Bay. Otherwise nice job.

It literally took me until Jack Black to figure out what was going on. Nice one! I was even planning on one of my own, but now I can't top that. :)

Got me, got me good

Severian's famous symbols monologue will be intercut with footage of scantily-clad lingerie models.

In all honesty, I think an adaptation would be possible, but only on a pay-channel like HBO who would be concerned with the artistic integrity of the story. It would also be crazy expensive; I'd imagine a 13 episode mini-series would probably cost 130-150 million to do the story justice. It's a shame it won't happen; the show would be the perfect HBO take on the scifi genre, kinda like what Game of Thrones is right now.

Knew what was going on reading the title, like you had written "steaming pile of poo to be a movie series." Although on second thought, I wouldn't be surprised to see that given the state of Hollywood lately.

In a world where Emmerich is/was genuinely attached to a Foundation film, this hits very close to the bone...

Bradley Cooper was attached to direct Hyperion. Anything is possible

Wow, so since I just read this on what the 3rd, 4th? you really had me going. Nice. Up until Jack Black, that is. Hell, truth be told, I was even thinking, Michael Bay, hell, why not? LOL. Nice one.

Well, I am torn. Just the hough of the " B.O.T.N.S. " by Gene Wolfe is enough to wake me up for a week and get me blathering at pretty much anyone. Then, after reviewing comments and re-reminding myself of what Mike Bay worked on it was like someone stuck a pin (or 7 ) on my birthday balloon. <---hey I just invented that, lol :) " B.O.T.N.S. " to be done right is a serious undertaking nearly akin to Peter Jacksons job on LOTR & The Hobbit. Whoever finally does this and IF it happens better get is 75%right or they are going to be hung by their short and curlies by the fan market and others.

he only other endeavor I want to see happen but partly dread the results is The Black Company Series by Glen Cook (at least the first 5 books and Silver Spike Should be a seperate movie on its own. Honestly, to get something like this right - they should put a true, decades long fan in charge like me for example. Otherwise they will screw it up like they usually do. I like Game of Thrones, Conan (old and new) but both the ENTIRE series of Wolfe's books of he New Sun and .... the Long Sun as well as Glen Cooks entire Black Company Series should be made into long term weekly hour long shows with 2 hour intro-pilots and finalies. Fantasy and Sci Fi are hugely popular now, even in the mainstream - it is time for the hammer to strike on these.

Chances are, the executives will ignore this type of stuff and rehash some Asimov, Heinlein or revamp a washed out Terry Brooks "Sword of Shanaara" LOTR wanna be crap.I don't like being a whiny, bitchy pessimist but hopefully someone with connections will read this and convey a seriously important message o hose who make this type o shit happen. oh crap - I now see people reacting to the Jack Black comment. Sad... Hollywood, ec. movie producers are oo cheap and stupid to realize something like this - they would rather run a 3 season reality ghost hunting show that involves beavers.

It's worth noting that there is now a SHANNARA TV show, which starts airing in January on MTV.

The Book Of The New Sun is my all time favorite work of literature, period - Dune being a very,VERY close second. So yeah l was practically wetting myself....then the name Michael Bay appeared and my wetness came in the form of tears....then the reimagined image of Terminus Est had me laughing my ass off lol. Well done you rat bastard.

Jesus God no. Jack Black as Severian? It'll be Cate Blanchet as Thecla and Russel Crow as Dr Talos next.
I hated the Lord of the Rings when it came out for the changes, and if this gets made I shall avoid. I do wonder who would go to see it, not many people have heard of Gene Wolfe here in England. everyone has heard of Tolkien.