GRRM on THE WINDS OF WINTER

George R.R. Martin has broken his year-long radio silence on The Winds of Winter to confirm that he hopes to release the book in 2017. 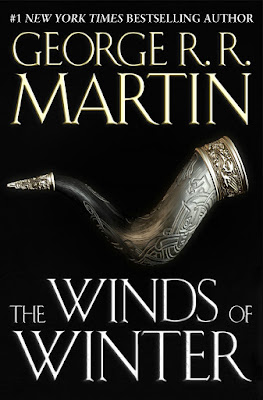 Martin cautions that he had hoped to release the book in 2016, prior to Season 6 of Game of Thrones debuting in April and clearly failed to hit that deadline, and makes no guarantees that the book will be out this year. However, it is his current aspiration.

The previous book in the series, A Dance with Dragons, was released in July 2011, itself five years and nine months after the previous volume, A Feast for Crows. The Winds of Winter will break this record if it is not released by April, which does not seem likely at this stage. Publication before Game of Thrones begins its seventh and penultimate season in late June 2017 also seems a little ambitious (but not completely impossible).

The turn-around from hand-in to publication for the novel will be around three months. To get the book out before 2017 ends, Martin will have to turn the manuscript in around August of this year.

Martin declined to provide a page count update for the novel. However, in January 2016 he confirmed that he had completed hundreds of manuscript pages and dozens of chapters. The Winds of Winter is expected to approach the size of A Dance with Dragons and A Storm of Swords, which both had over 70 chapters and 1,500 manuscript pages.
Posted by Adam Whitehead at 19:33

Won't hold my breath. So over this.

Slightly off topic, but do you know if Thorn of Emberlain is a pretty much guarantee 2017 release? Any inside information or whispers?

I think THE WINDS OF WINTER will be out when hell freezes over. By now everyone is taking Martin's deadlines as nothing but pipe dreams.

Yeah, as the previous poster said...whatever. In a sense these books kinda had their moment, for me personally at least, and I've moved on. Love GRRM, can't wait to finish reading the series, but the truth is, A. there was a massive drop-off in quality after the third book, the last two have been nowhere near as good, and B. a lot of the fun of reading the book series has been ruined by it getting passed, and the ending reached first, by the inferior tv show.

I think the real question here is will GRRM have made enough progress in WoW that he can wrap the series up in 1 more book. If we’re talking 2+ books remaining after WoW then the most optimistic projection is that he would wrap the series up sometime in his 80’s. Not sure how many authors put out their best work that late in life...

You should bookmark this so you can just copy and paste when he says the same thing next January.

Outrageous. I am absolutely certain GRRM will release the book in 2014.

Whoops, sorry, I didn't update my bookmark when I copied that reply.

I must admit that I am totally and utterly baffled by Martin's writing process and his estimates of how well he's doing. If I remember correctly, he wrote a blog post a year back where he apologized to his fans and editors for not making the end of 2015 deadline. In that blog post he said that even as far as September 2015 he thought he could make it. And herein lies my problem: if Martin thought, even with all his prior missed deadlines, that 3 months might just be enough to finish the damn thing, how the hell is it still not finished 15 months later with no guarantees it even comes out in 2017? How can anyone look at a book being written for 5 years, think 3 months are hopefully gonna be enough and then miss the estimate by additional 20 months at least? I mean, is Martin habitually destroying hundreds of pages every other week?

I gave up on this series being finished a long time ago. Even if he publishes WoW soon-ish, there's still ADoS some 5-7 years down the line and a probable eighth book (because, honestly, I can't see him winding this goliath down in only 2 books).

I fell in love with this series in 1996 with A Game Of Thrones, loved ACOK and especially ASOS too. But the 5 year wait for the weak AFFC was more than sign that Martin was dropping the ball. Another 5 years later he dropped the second half of the turd with ADOD, while in the meantime allowing HBO to finish his series before he ever could.

So here we are, 'waiting' for the sixth (and penultimate? Or not?) book in a series that lost all steam (and quality) after ASOS - over 15 years ago now.

After all that time, I'm only mildly irritated and disappointed anymore about Martin messing up what could've been a brilliant series.

I will read the sixth book, but expect nothing anymore (especially if the trend set with the last two books continues - unedited, bloated messes).

So I regretfully have to say I don't really care anymore...

I don't really mind any series taking a third of my life, beginning to end. Thank the maker Lord of the Rings was completed before my life.

But GRRM and Jordan have made me force a rule upon myself. Never read a series until it's complete.

Yes, therefore I may miss out on how fun it is to get hyped up for things (the journey being more important than the destination), but I ...

Only binging series from now on.