2018 will be the year of the BATTLETECH relaunch

2018 will see a return, in force, for the venerable BattleTech science fiction franchise. For over thirty years the franchise has fuelled a tabletop wargame, a roleplaying game, dozens of novels and over twenty video games. After a lean few years the franchise returns in force next year. Polygon has a massive, in-depth guide to the franchise, its history and its future going forwards. 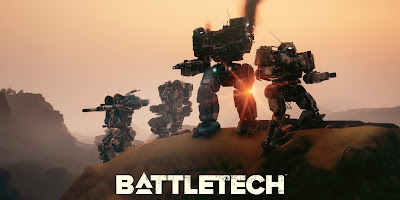 The new BattleTech renaissance will be spearheaded by three games. Piranha Games has spent five years developing MechWarrior Online and has turned it from a game with a mixed reception to a much more successful title with a widespread, international following (with now a startling 700 battle mechs available to play). They are now developing MechWarrior 5: Mercenaries, a new single-player game in which you play a 'mech pilot and lead a group of mercenaries across the galaxy, looking to find riches during the chaos of the Third Succession Wars. Set in the period 3015-3049 AD, the game will have a large sandbox campaign which unfolds differently depending on your game choices. The game promises unmatched replayability.

The next game in development is BattleTech. This is a turn-based strategy game under development by Harebrained Schemes and personally overseen by Jordan Weisman, the original co-creator of the BattleTech and MechWarrior franchises. This game will mix turn-based combat with a freeform campaign in which you guide your team of mechs from mission to mission in a starship with its own crew of individual characters. Weisman and his team promise a mixture of giant 'mech action and Firefly-like interrelationships on the ship.

Of course, there is also where the game originally began: miniatures. Catalyst Game Labs is now in charge of the BattleTech wargame and is developing new rules, expansions and miniatures, as well the related A Time of War roleplaying game. In 2018 they aim to make getting into the BattleTech tabletop game easier than ever with the release of new starter sets complete with miniatures, terrain and counters.

The game also has an enormous amount of fiction and lore backing it up. More than one hundred novels tell the story of the future of the human race, from a post-Cold War alternate history of the 21st Century through to a period of instability at the start of the 32nd Century.

2018 looks set to be a huge year for the setting. It'll be interesting to see how successful these companies are in bringing in a new generation of fans to the venerable big 'mech franchise.
Posted by Adam Whitehead at 19:15