FALLOUT board game released in the USA

Fantasy Flight Games have released the Fallout board game in the United States. It is now available from Amazon or your favourite game store. UK and European gamers may have to hold on for a week or so as stock makes its way to our shores. 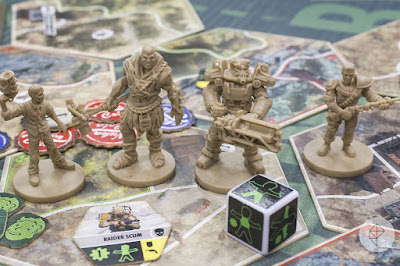 The board game allows players to set up one of four possible maps (one each based on the Fallout 3 and Fallout 4 video games, and one each based on the Pitt and Far Harbor expansions) and then engage in exploration, scavenging and combat which will be familiar to any player of the video games. The game can be played by 1 up to 4 players, with a surprisingly welcome solo play option.

Reviews are starting to emerge, with Polygon offering a strong review in favour of the game. Man vs. Meeple also has a positive review of the game. The early emerging consensus seems to be that this is  a very solid board game in its own right but it gains a lot of additional flavour if you're a fan of the Fallout franchise (if you're not, check out our Franchise Familiariser for the game here) and know ahead of the time who the Brotherhood of Steel and the Institute are.

There is scope for expansions to the game. The developers tried to add missions based on Fallout and Fallout 2 but ran out of space, so we may see further content based on those games, New Vegas and maybe even Fallout Tactics added further down the line.

As soon as I can get hold of a copy, I'll post more information about it here.

Modiphius Games are also working on a much more elaborate - and far more expensive! - tabletop wargame called Fallout: Wasteland Warfare. This game will be released in early 2018.
Posted by Adam Whitehead at 19:47