The Shadow Within by Jeanne Cavelos

November, 2256. Anna Sheridan, an archaeologist working for Interplanetary Expeditions, is investigating an ancient alien artefact recovered from a remote planet. When the artefact scrambles the brain of a telepath, Psi Corps becomes very interested in where the device came from and what it means. Improbably, Interplanetary Expeditions rapidly discovers a candidate for the machine's homeworld - "Alpha Omega III", on the rim of known space - and dispatches a ship, the Icarus, to investigate. Anna joins the crew and discovers a seething mess of corporate espionage, competing interests and hidden secrets hinting at how this planet was discovered so quickly. Anna feels the only person she can trust is an archaeo-linguist suffering a profound grief and trauma: Dr. Morden. 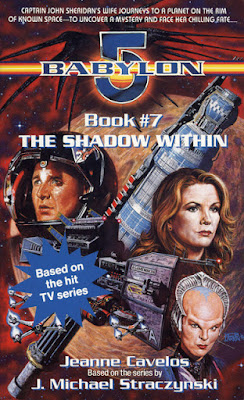 When J. Michael Straczynski started planning his Babylon 5 television series in the late 1980s, he had the idea of creating the first-ever genuinely multimedia franchise. His idea was for the tie-in novels and comic books to be just as important and canonical to the setting as any episode of the television series (Star Wars later tried to do something similar with its Expanded Universe, which ended in failure). In the event this proved challenging: the publishers did not want to spend a lot of money on quality writers and their production schedules for the books was ridiculous. John Vornholt had a month apiece to write his two books in the series and found that so tough he refused to write any more.

After the first six novels came out and, with the honourable exceptions of Vornholt's Voices and Jim Mortimore's Clark's Law, turned out to be terrible, there was a reset of the line. Straczynski assigned the next three book outlines and premises personally and tried to find better writers. The result gave us another awful novel - Personal Agendas by Al Sarrantonio - but it did finally provide two books which finally fulfilled the potential of the idea by giving us novels that told stories the TV series was unable to. These two books - The Shadow Within and To Dream in the City of Sorrows - are both considered fully canon for the TV show and are pretty decent SF novels in their own right.

The Shadow Within is the more self-contained of the two and can be read without any pre-knowledge of the Babylon 5 setting, especially since the titular station and the regular TV characters barely appear. Instead, the focus is on Anna Sheridan and the mission to Alpha Omega III. This storyline is well-played, although modern readers may draw parallels with the 2012 movie Prometheus. Fortunately, The Shadow Within is far better-written and more plausible in how it depicts the behaviour of the team of scientists and engineers. Jeanne Cavelos is an actual former NASA astrophysicist, which helps with the description and outfitting of a scientific mission. 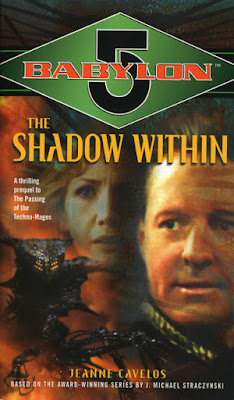 The book also has a significant subplot, with Captain John Sheridan assuming command of the Omega-class destroyer Agamemnon. To his horror, the crew is lackadaisical and insubordinate, the result of the corruption of the previous captain. This subplot sees Sheridan having to uncover what happened with the previous captain that corrupted so many of the officers and trying to bring the crew up to Earthforce standards, just as the ship is dispatched on an urgent mission. This subplot is pretty decent but feels a little incongruous when contrasted to the Anna story, which is much more interesting.

This storyline also begins to cross-bleed into the horror genre, especially when the Icarus reaches the alien planet to find it is not as dead as was previously indicated. Strange things start happening, crewpeople start going missing, people start behaving weirdly and a growing feeling of doom envelops the story. But there's some big surprises here even for seasoned Babylon 5 fans. The ending in particular transforms Mr. Morden from an evil snake-oil salesman into a much more tragic figure, destroyed by circumstance and grief, which makes you re-examine the character from the TV series.

The Shadow Within (****) is a decent and solid - if rather short - SF novel which works well as a Babylon 5 tie-in and as an introduction to the entire franchise for newcomers. It also serves a prequel to Cavelos's later Passing of the Techno-Mages Trilogy, which picks up on some of the story threads left dangling from this novel and the TV series. The book is available in the UK and USA.
Posted by Adam Whitehead at 17:12