The Planet Factory by Elizabeth Tasker

Up to the early 1990s, the discussion of how life is formed and how many habitable planets there may be in our galaxy was massively restricted by us having only one star system - our own - and only eight planets and two dwarf planets to study. In the last quarter of a century, that has radically changed. 3,710 confirmed planets circling other stars have been discovered, with an additional 15,000 suspected to exist and awaiting verification. We have gone from having a handful of planets to look at to veritably drowning in them, with more discovered almost every month. 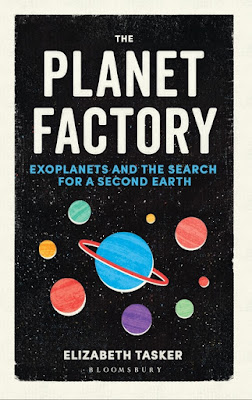 The key question is can any of these planets harbour life, even intelligent life, and if they do how can we find them? And how do you build a planet and a solar system anyway?

Astrophysicist Elizabeth Tasker tackles a large number of questions in her book. It looks at how the Earth was formed and the role played by the rest of the Solar system in its creation. This involves a detailed look at the phenomenon which, highly unusually, resulted in our gas giants ending up in quite distant orbits from the Sun (most gas giants end up orbiting their stars at a mere fraction of the orbit of Mercury, becoming so-called "hot Jupiters"), allowing the Earth to form unmolested in the inner Solar system. The book also looks at how water is formed and gets deposited on planets, and the degree to which water is essential for life or if other substances could be used.

The book also explores several dozen of the more exotic exoplanets, including worlds which orbit pulsars and are fried in their radiation beams on a regular basis; worlds covered in thick tar and others where diamonds literally rain out of the sky. There are water worlds with oceans thousands of kilometres deep and frozen iceballs which have been catapulted out of their parent systems and now wander on their own between the stars. These descriptions are vivid and show how chemistry and physics can combine to create worlds far stranger than any science fiction has come up with.

The book is approachable, with occasional dips into more complex discussions of chemistry and orbital resonances, but for the most part the book is perfectly readable for the layman. There's a nice line of humour in the book and the use of pop culture references to explain how certain planets work (a chapter on exomoons compares them to the Forest Moon of Endor from Star Wars, for example, and the one on rogue planets briefly invokes the Transformers homeworld of Cybertron which was likewise blasted out of its orbit around its home star).

The book also explains the techniques used for detecting exoplanets and how they are being refined further to look for planets the size of the Earth, or smaller, and how we may be able to pick up the telltale signs of life through atmospheric conditions.

One of the things I liked most about the book was its upbeat tone. Given that exoplanets seem to have added a whole load of extra steps to the conditions necessary to have life, it would have been easy to have concluded that if life is out there, it's even rarer than we thought and would be very difficult to find. However, Tasker instead keeps showing how even the craziest worlds may still be able to give rise to (at least) bacteriological or microbial life. In one of the most positive chapters, she even looks at the problems Earth has had in developing life - its frequent ice ages as the result of Milankovitch cycles caused by the gravitational tugs on its orbit by other planets, its occasional collision with large asteroids - and postulates planets that wouldn't have these problems and where life and even intelligent life could develop much more quickly than on Earth.

The Planet Factory (****½) is a fast-paced and readable non-fiction book which expands on current science, explains planet formation theories in an approachable way and is highly informative. It's also a good watch of catching up on what is a very rapidly-evolving field. The book is available now in the UK and USA.
Posted by Adam Whitehead at 15:56

Another great review. I'll put it on my to-read list. Very similar to a great nonfiction book I just read called If the Universe Is Teeming With Aliens... Where Is Everybody? Also written by an astrophysicist, it offers 75 solutions to the Fermi Paradox. From what you've written about this book, there may be a little overlap, but not much. And like The Planet Factory, it occasionally gets a little deep into the hard science, but overall was a very enlightening read.

I read that book because it was referenced in a science fiction book called After On by Rob Reid. After On came out several months ago, and is a truly great book. Tons of intriguing ideas I had never considered before, one after another, and the characters are more believable than those in most books I've read. Never a dull moment. From social media to synthetic biology, AI to religious philosophy, if you think you know what the book's about, it will change 15 pages later. Extremely well written in my opinion. Would love to see your take on either of these books. Love the site. Thanks again!