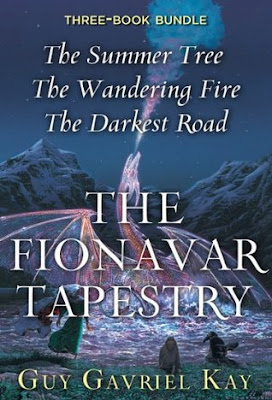 Toronto, Canada – December 18, 2017 - Temple Street, a division of Boat Rocker Studios, has secured the television rights to international bestselling author Guy Gavriel Kay’s The Fionavar Tapestry. Published as three volumes in the mid-1980s (The Summer Tree, The Wandering Fire and The Darkest Road), the trilogy has sold more than a million copies around the world, and has been dubbed by The Guardian one of the classics of modern fantasy. New York Times bestselling writer Brandon Sanderson has called Kay “the greatest living author of fantasy literature.”

The Tapestry tells the tale of five young men and women who are brought to Fionavar – the first of all worlds. Told they are simply to be guests for the 50th anniversary celebration of a king's ascension to the throne, each of the five discovers they have a greater, dangerous role to play as they're thrust into a war between the forces of good and evil, whose outcome will affect all worlds, including our own.

Kay draws upon a variety of creatures and mythologies, predominantly Celtic and Norse, to create the world of Fionavar, and the saga also features the legendary story of King Arthur, Lancelot, and Guinevere, heroes of medieval literature.

“Guy’s work is exhilarating and cathartic, and we can’t wait to share this epic story with audiences around the world,” say Boat Rocker’s co-executive chairmen David Fortier and Ivan Schneeberg. “Given the current appetite for big budget, high-fantasy adaptations, the timing for Fionavar couldn’t be better. We’re excited to start assembling the creative team to help realize our vision.”

"I'm truly happy that David and Ivan and the impressive team at Temple Street are the ones bringing my trilogy to television. I know The Tapestry has had a powerful impact on readers – and on other writers – and that's part of why I've been careful with the rights. I'm excited and anticipate this adaptation will bring new people to Fionavar, while rewarding longstanding fans," says Guy Gavriel Kay.

Fortier and Schneeberg will executive produce for Temple Street (Orphan Black, Killjoys), along with Kris Holden-Ried (Vikings, Tudors, Lost Girl). “The magic of Fionavar transcends the page. It’s a clarion call to that which is best in all of us, and it’s an honour to be bringing the emotional poetry of Guy’s books to the screen,” says Kris Holden-Ried.

The news is exciting but slightly unexpected: The Fionavar Tapestry is Kay's first work and as such is not quite as well-regarded as his later, more self-contained novels such as Tigana, The Lions of Al-Rassan and Under Heaven. However, it's big story (still the biggest thing Kay's ever written) and could fuel several seasons of a television series. Adapting his other books, which are mostly set in the same world but at wildly varying geographic and historical points, would be more problematic (although I have a suggestion for how you'd do that here).

This is great news, well-deserved for what may be our greatest living author of fantasy, and hopefully we'll see this project greenlit quickly.
Posted by Adam Whitehead at 15:42