The day after tomorrow. In the wake of damaging climate change and rapidly growing infertility, the United States has fallen, torn apart by civil and societal strife. In its stead has risen Gilead, a religious theocracy based on an ultra-conservative interpretation of the Holy Bible. Women have been relegated to the status of secondary citizens, unable to vote, not even being taught how to read. For women of proven fertility it's even worse: they become "handmaids", given to rich couples to bear children where the wife cannot. A woman once named June is now Offred, a handmaid in the family of the Waterford family. Her life is filled with despair, until she learns how to play the game in this new world and learns that there may be a way of escaping her fate. 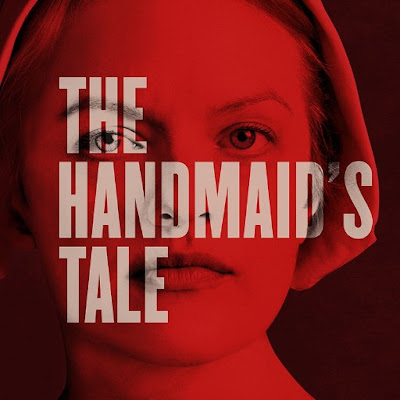 The Handmaid's Tale is the most famous novel by Canadian author Margaret Atwood, an Arthur C. Clarke Award-winner feted for its language, its characters and the grim but compelling dystopian world it paints. The previous attempt to adapt the novel, a 1990 movie with a script by Harold Pinter, had a mixed reception, with one of the problems being that it was very difficult to pack the levels of character and themes in the book into an hour-and-a-half.

Hulu has now adapted the novel as an ongoing television series, starring Elisabeth Moss as the titular handmaid, June (or Offred). With ten hours to fill, the first season immediately lets the story breathe, using its running time to intelligently examine different facets of the world Atwood created back in 1985. The "worldbuilding" of Gilead in the TV series is significantly more robust and detailed, with the series alluding to an ongoing war against remnants of the old American government and expanding on Gilead's relationship with both Canada and Mexico. This expansion of detail is not allowed to overwhelm the characters or the central story, but it adds background and depth to the setting.

The Handmaid's Tale is never an easy watch. It depicts a world in which women are systematically broken down and reduced to servitors, walking wombs for the use of their owners, their own feelings and thoughts marginalised or ignored. They are meant to breed, to have their babies taken way from them, and then used again. Abuse in the system is rife, some of it to the benefit of the handmaids, and as the story unfolds Offred learns how to game the system to her own eventual goal, of escaping to Canada and hopefully find her daughter along the way. The core of the story is triumph - or at least survival - against adversity, one of the oldest narratives, but to get there takes a lot of adversity, and with a multi-season run planned, we'll likely see a lot more adversity to come.

Fortunately, the Handmaid's Tale seems aware it could become an unrelenting parade of grimdark and takes steps to avert there. Flashbacks to the days before the fascist takeover show happier times and we get to see the characters (on all sides of the fence) as they were when they were younger, before the walls (on speech and thought, as well as literally) came slamming down. Unlike the novel, which remains tightly focused on Offred, the TV show develops side-stories which follow characters like Serena Joy (Commander Waterford's formerly famous wife now struggling to cope as a second-class citizen, angrily jealous of Offred's fertility) and Nick, the Waterfords' driver who has his own hidden agenda. The series moves easily between these storylines whilst retaining the core focus on Offred, our narrator and our window into this world.

Elisabeth Moss (Mad Men) is terrific as Offred, striking a balance between resolve, intelligence, steel and apparent submission. Joseph Fiennes - a talented actor who arguably has never quite fulfilled the early promise of Shakespeare in Love - is also very good as Waterford, a man who has brought about a world of apparent religious respect for God but who is happy to hypocritically indulge in vices (showing his concern is less religion than it is for the control and submission of women). Arguably the most outstanding revelation of the season is Yvonne Strahovski, whose previous starring role in Chuck hinted at much greater acting potential which is given full flourish here: Serena Joy is harsh, cold and distant but we then get to see behind the facade and discover that she was once a more sympathetic character...until the season finale when we find out just what she is really capable of. Alexis Bledel (Gilmore Girls) also gives an outstanding performance in a small role as Emily, another handmaid forcibly separated from her wife and keen to find a way of bringing Gilead down (Bledel has been promoted to a regular in Season 2, where this story will presumably become more important). Ann Dowd also gives a striking performance as Aunt Lydia, the handmaids' supposed mentor who is brutal towards them when they are defiant, but occasionally shows hints that she is not keen on the system either (and takes advantage of a few moments when she can force the new order to listen to her). A key strength of the cast is how well they make the antagonistic characters work.

The show doesn't have many weak links. Some questions remain on how completely and quickly Gilead rose to power (apparently only two or three years have passed since they overthrew the United States) and occasionally it feels like the pacing flags, or potentially interesting stories are put on ice for several episodes and then abruptly brought back into focus. It's also worth mentioning again that this can be a hard watch, and definitely not a show to put on if you're feeling depressed. But for those who appreciate great acting, excellent writing and some remarkable direction, it's unmissable.

Season 1 of The Handmaid's Tale (****½) is powerful, evocative and haunting television. It can be watched on Amazon in both the UK and USA, and is also available on DVD (but, curiously given its visual richness, not on Blu-Ray) in the United States. Season 2 is expected to air in April 2018.
Posted by Adam Whitehead at 17:02

Alexis was in Gilmore girls not gossip girl.