In the not-too-distant future, the world is a morass of internet-based TV shows and corporate greed. The people best-equipped to survive in this world are those who synthesise content for the net: synners. The arrival of sockets, cybernetic implants which allow people to directly interface with computers through their minds, marks a major change in society and technology, and what it means to be human. But when something goes wrong, it falls to one group of synners - outcasts, failures and data junkies - to save society, fix the net...and discover that intelligence itself can be synthesised as well. 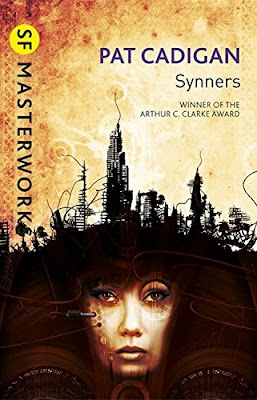 Synners is the third novel by American SF author Pat Cadigan. Originally released in 1991, it was a late-breaking novel in the cyberpunk movement, championed by the likes of Bruce Sterling, William Gibson and Neil Gaiman. It won the Arthur C. Clarke Award and has been enshrined in the Gollancz SF Masterworks range as one of the all-time defining works of science fiction.

Synners is interesting for coming towards the end of the cyberpunk movement, at least before subsequent books like Jeff Noon's Vurt and Richard Morgan's Altered Carbon began taking it in very different directions and the movement was subsumed more into science fiction as a whole. It's also interesting for coming during the earliest days of the internet as we know it, so at least some terminology (laptops, email, virtual reality) rings true, unlikely earlier cyberpunk whose invented terms now feel very dated. Like most cyberpunk authors Cadigan missed mobile phones, but it oddly doesn't feel as archaic in this book. Cadigan is more interested in how technology and being networked impacts on the human condition and the methodology for accessing the net is less important. It is impressive how many other things she got right: satnav systems which actually don't really help anyone get anywhere, hackers uploading viruses to the net just for giggles and self-driving vehicles all feel pretty much on-point at the moment.

More impressive is how the novel feels like it's subverting cyberpunk itself. The Los Angeles of Cadigan's future America is, well, pretty much Los Angeles today, maybe slightly bigger and dirtier but certainly not the Los Angeles of Blade Runner. There's nary a mirrorshade or ill-advised superskyscraper (in an earthquake zone!) in sight and cyborg cops smashing down doors and firing massive guns are notable by their absence. But growing corporate power and tech companies acting like they are above the law and pressurising baffled politicians who can't see beyond the next election into giving them carte blanche to do whatever the hell they want without regard for the consequences for society and the economy have never felt more appropriate.

Cadigan's prose mixes poetry with hard-edged science fiction descriptions of hardware and software. They are sequences of people immersing themselves in the net and drugs which come across as lucid fever dreams. The novel also delights in the mundane: one of the most important viewpoint characters, Gabe, has marriage problems and a changeable relationship with his daughter, Sam. There is a frustrated air of rebellion in many characters, who take drugs and listen to loud music but no-one really cares any more, certainly not the government which is now wholly in the pocket of corporate interests.

Synners has some sins (syns?). The novel is slow to come together, taking a hundred pages to assemble a large cast of viewpoint characters (possibly too many; Gina, Gabe, Sam emerge as the main viewpoints and the novel may have benefited from dropping some of the secondary viewpoints). The scattershot opening makes the world feel grounded and realistic, but the lack of focus makes it hard to work out what's going on. But about a quarter of the way into the book starts to coalesce and the last quarter has the pedal fully to the metal as a global crisis erupts and only our "heroes" - the most dysfunctional bunch of hackers and artists you could ever hope to meet - can save the day.

Synners (****½) is a smart and grounded cyberpunk novel that gave the genre a final shakedown, stole its wallet and told it go and do something more interesting. Not the easiest of reads (especially at the start) but one that more than rewards the effort. The novel is available now in the UK and USA.
Posted by Adam Whitehead at 15:43