Located in the furthest east of the known world, beyond the Jade Sea, Asshai is one of the most storied and fabled cities known to man. Sailors and merchants sail there seeking riches and arcane knowledge. Sometimes they find it, and are haunted by what they have seen all their lives. Sometimes they return changed for the experience. To visit Asshai is to risk passing under the Shadow, and not all who do so return whole. 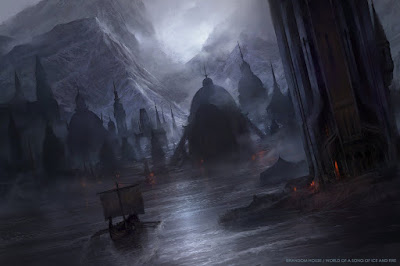 The City of Shadows by René Aigner, from The World of Ice and Fire.

Location
Asshai is located at the mouth of the River Ash, at the tip of an enormous peninsula on the south coast of the continent of Essos. Asshai is located almost exactly six thousand miles south-east of the city of King's Landing in Westeros, and is located very close to the equator. It is one of the southernmost cities known to exist; only Ebonhead in the Summer Islands is further south. It is also one of the easternmost cities known to exist, with only Carcosa in the Mountains of the Morn believed to lie further east.

Asshai is often called Asshai-by-the-Shadow. This is because Asshai is located at the edge of a region known as the Shadow Lands, a land of towering, jagged mountains that plunge the valleys between and the lands around them into near-perpetual shadow.

There are no good roads linking Asshai to other cities, only a single track leading up into the mountains, stretching for 300 miles before terminating at the corpse-city Stygai, where only the shadowbinders are allowed to tread, and a rough caravan track leading north along the coast towards the border of Yi Ti. The only other way in or out of the city is by sea. Asshai is the eastern-most port on the so-called "Traders Circle" around the shores of the Jade Sea, with ships typically stopping off at the city before bearing west for Marahai and other islands on their way back west to the Cinnamon Straits and the Summer Sea.

Asshai also guards the entrance to the Saffron Straits, which link the Jade Sea to as-yet unknown oceans to the east and divide Essos from the island-continent of Ulthos to the south. No ship has ever sailed more than a few hundred miles up the straits and returned to report their findings. For these reasons, Asshai is believed to lie right on the very edge of the known world.

Physical Description
Asshai is the largest city known to exist. It sprawls on either side of the Ash for miles upon miles, consisting of thousands of buildings, mostly built of a curiously, oily black stone. The city is walled, but with the nearest neighbours being thousands of miles away, it is unclear what the walls are designed to defend against. According to some cartographers, the walls of Asshai could comfortably hold Volantis, Qarth, Oldtown and King's Landing combined. However, less than one-in-ten of the buildings in the city are inhabited. Most of the city is abandoned and dead.

Known buildings in the city include markets, taverns, bazaars, temples and palaces. The port is the busiest part of the city, with numerous ships from across the known world usually in port at any one time. It's also the area of the city which feels most alive, where laughter can be heard. The city has an oppressive atmosphere, and is often shrouded in gloom and shadow, with mists rising from the Ash and storms brewing over the mountains. Visitors to Asshai prefer not to spend too much time there. 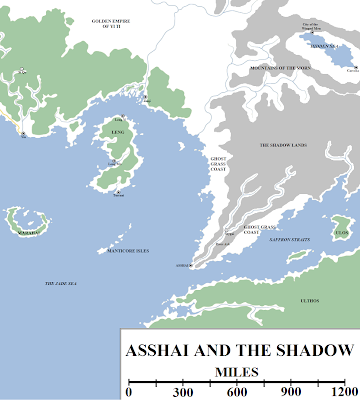 History
The origins of Asshai are unknown. According to the Asshai'i, their forefathers in the Dawn of Days simply found the city standing as it appears now. Whoever built the city and for what purpose is unknown. Some imaginative maesters draw a link between the oily black stone of Asshai and similar stones found as far afield as the Basilisk Isles, Yeen in Sothoryos, Battle Isle in Oldtown and Lorath, suggesting that a pre-human (and perhaps even pre-Children of the Forest) civilisation once existed and flourished before being destroyed in an unknown cataclysm, long before even the migration of the First Men to Westeros twelve thousand years ago.

This story is not widely accepted, but it remains unclear who could have built Asshai. It was not the YiTish or their forefathers in the Great Empire of the Dawn, nor was is the Ghiscari, Valyrians or Sarnori. No other candidate civilisation is known to exist. This is a mystery, and may remain one forever.

What is known is that Asshai was an inhabited sea port during the time of Old Ghis and the Great Empire of the Dawn. According to myth, the Great Empire forced Asshai to pay tribute for a time but overextended itself and had to withdraw from the region. According to the Asshai'i, it was their emissaries who taught the nascent Valyrians how to tame and train the dragons they had found nesting in the Fourteen Fires of their peninsula, and it was their fire magic that helped save the world from the oblivion of the Long Night.

Asshai's history is remarkable for how lacking in incident it appears to be: the city and its curious people have simply existed at the edge of the world for millennia uncounted, trading knowledge and riches with outsiders in return for food, never suffering attack and rarely facing an external threat.

Origin and Influences
Asshai is a city frequently mentioned in George R.R. Martin's A Song of Ice and Fire novels and, occasionally, in the HBO TV adaptation, Game of Thrones. It is a place of mystery and foreboding, mentioned with awe and dread by characters who have heard of it.

Only one of Martin's POV characters, Melisandre, has seen Asshai with her own eyes and even she is not a native of that city. We have met Quaithe, who is from the Shadow Lands (not Asshai itself), but she is not a POV character and has only appeared very briefly.

Much of the information given about Asshai has been very general: it is a place of mystery and strangeness, it is located in the far south-east of the world and it is a great port on the Jade Sea. It was later revealed to be a centre of R'hllor worship and dragons may live in the Shadow Lands beyond the city. Much more than was not known until A Dance with Dragons (2011), when Melisandre was promoted to a POV character and we got very brief flashbacks and mentions of the city as a place of great power (Melisandre notes that the Wall is the only place in the world where her powers are greater than in Asshai). Lands of Ice and Fire (2012) shows the city for the first time on a map, with the mysterious city of Stygai located beyond it. Finally, The World of Ice and Fire (2014) answered many questions about the city, but introduced more. In particular, Martin used the power of the unreliable narrator in the world book to make statements that are not necessarily true (such as there being no children in the city).

For fictional inspiration, Martin was inspired heavily by the works of Robert E. Howard and H.P. Lovecraft. The city of Stygai was almost certainly inspired by Stygia, a forbidding city in Robert E. Howard's Conan the Barbarian story "Shadows in the Moonlight". The notion of Asshai as a city built by a mysterious pre-human civilisation at the dawn of time and the current human inhabitants are merely confused primitives playing in the ruins is positively Lovecraftian.


Will we learn more about Asshai? Melisandre will presumably remain a POV character in The Winds of Winter and we may see more of the city through her eyes and flashbacks. A direct visit to the city in the series itself has been explicitly ruled out, but it's possible that Martin will one day write more about it, maybe in a short story or prequel expanding more on characters from there. Disappointingly, the city seems to have been virtually ignored by Game of Thrones after the second season, and the chances it will show up in the six remaining episodes of the series are pretty much non-existent. But it may be better and more fascinating for the city to remain an enigma.

Thank you for reading The Wertzone. To help me provide better content, please consider contributing to my Patreon page and other funding methods, which will also get you exclusive content weeks before it goes live on my blogs. The Cities of Fantasy series is debuting on my Patreon feed and you can read it there one month before being published on the Wertzone.
Posted by Adam Whitehead at 12:09