The Galactic Civil War is in full force. The Galactic Empire is searching for the secret base of the Rebel Alliance, planning to destroy it with their newly-constructed Death Star to secure complete control of the galaxy. The Alliance is on the offensive, however, sending agents behind Imperial lines to sabotage factories and win neutral systems to their side. It is a race against time, as the Empire's brutal tactics risk fermenting a galaxy-wide uprising, whilst the Alliance has to secure a victory before the Empire finishes them off once and for all. 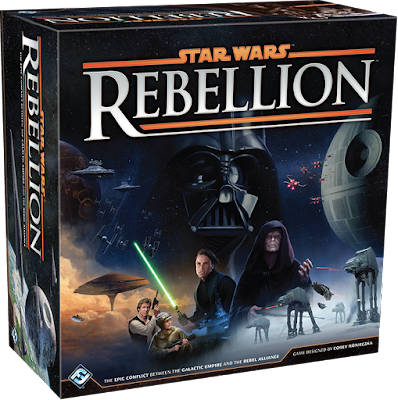 Star Wars: Rebellion is a two-player board game from Fantasy Flight Games, depicting the Galactic Civil War of the original Star Wars movie trilogy. One player assumes command of the Empire and the other takes control of the Rebels. The Rebels must survive long enough for the Empire to collapse under its own weight, a process they can accelerate by achieving strategic goals such as destroying the Death Star, shooting down Star Destroyers or liberating subjugated planets. The Empire must win by destroying the Rebel base, but with over thirty possible planets where the Rebels can be hiding, this is easier said than done.

Rebellion is asymmetrical game, meaning that the two sides aren't simple reskins of one another. The Empire commands a far larger and superior military force including Star Destroyers, TIE Fighters and AT-AT walkers. Whilst the Rebels have superior fighters, their capital ship fleet (of just three potential Mon Calamari Star Cruisers and a few Corellian Corvettes) is far smaller. In a head-on military confrontation, the Rebels will always lose. Fortunately, the Rebels are a lot sneakier than the Empire and can do a lot of things they can't.

The Rebels command a wide variety of agents. These start off with only a few diplomatic heavy hitters like Mon Mothma and Leia Organa but later on expand to incorporate smugglers, fighters and military commanders like Admiral Ackbar, Lando Calrissian and Luke Skywalker. The Empire also has agents, including Darth Vader, the Emperor and Boba Fett, but these are less versatile than their Rebel counterparts. Rebel agents can use diplomacy to win over systems to the Alliance, gaining access to their resources, or even launch uprisings on conquered worlds deep behind enemy lines. They can also bomb factories, destroying Imperial units awaiting construction, and shutting down production lines altogether. Rebels can also mount guerrilla raids on larger Imperial fleets, locking them down to allow the main Rebel fleet to retreat or mount attacks elsewhere.

However, every turn the Empire launches probe droids to scour planets in search of the Rebel base. Some Imperial tactics also allow them to radically expand that search (from scanning two to potentially eight planets per turn), and the Empire can also land troops on the ground to conduct manual searches. If the Rebel base is destroyed, the Rebellion dies, so the Rebels must engage in subterfuge, misdirection and espionage to prevent that from happening.

The game features an impressive array of counters, dice, cards (so many cards) and miniatures. There are tiny stormtroopers and Rebel troopers, snowspeeders, AT-ATs, AT-STs, TIE fighter squadrons, X-wings, Y-wings, Corellian Corvettes, Star Destroyers, Super Star Destroyers, Mon Calamari Star Cruisers and even three Death Stars (the Empire's ability to have multiple Death Stars flying around is the most notable callback to Star Wars: Supremacy, the 1998 grand strategy video game that inspired Rebellion). The miniatures are small but being able to assemble a fleet of six Star Destroyers led by Darth Vader's Super Star Destroyer and send it to crush a Rebel planet is still an awesome feeling.

Key to the game are the aforementioned characters, or agents. Each side has a plethora of characters to send on missions. As well as assigning characters to missions you can also use unassigned characters to disrupt the missions of other agents. The Empire also has the ability to try to capture Rebel leaders and interrogate them (and, in rare cases, turn them to the Dark Side), whilst the Rebels then have the ability to rescue them. You also use characters to take command of fleets and guide them from system to system, but they can't both command a fleet and disrupt enemy operations, leading to interesting strategic missions. If the Empire has a massive fleet waiting to move on a Rebel system, the Rebels can send multiple agents to commit sabotage or espionage operations in that system. The Empire can choose to disrupt those operations with their leaders in that system, but won't then be able to move their fleet. If they choose not to disrupt those operations, the Rebels might win significant advantages. 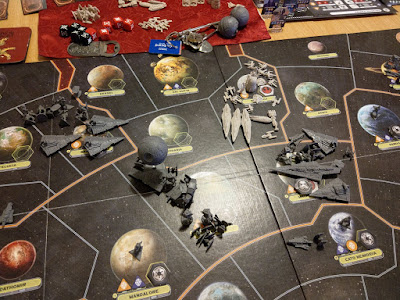 The result is an intricate game based on outright military action, covert operations and diplomatic games of bluff and double-bluff, all drenched in authentic Star Wars flavouring. This is a game that does what modern board games do best: generate stories from your actions, stories that shift and change each time.

Rebellion does have several issues, although these may be features to some players rather than bugs. It's a Fantasy Flight game, so that means that the rules are not always tremendously clear. The "quick start" manual omits about half the game rules whilst the main rulebook is not tremendously detailed. Expect to spend a lot of time studying errata, forum posts and YouTube videos to explain more obscure rules. There's also the fact that the game is not a quick play. In our first game, it took four hours to run through about five turns (out of a possible fourteen). By our sixth game we'd gotten that down to about four hours for twelve turns, which was much better. Some hold that the Rebels are actually slightly easier to play in the game and the Empire has a harder task to win, although I'm not sure about that, since theoretically the Empire could win the game in a couple of turns, depending on where the Rebel base is, and the Empire has much more flexibility in terms of military options, but it's true that the Rebels have more gaming options overall.

Rebellion is also strictly a two-player game. There is a team option, with two players on each team, but it's pretty thin stuff. Those who want a grand space strategy game with multiple players is directed to Fantasy Flight's Forbidden Stars (if you can find it before the final copies disappear), which scratches some of the same itch. Of course, if you regularly have entire weekends freed to dedicate to one space strategy game, there's always Twilight Imperium (cue readers screaming and running for the hills).

In the final analysis, Star Wars: Rebellion (****½) is a fine and engaging strategy boardgame that makes excellent use of the Star Wars mythos and is unrelenting fun. It is available now in the UK and USA. There is also an expansion, Rise of the Empire, which I haven't tried yet.
Posted by Adam Whitehead at 19:31