England, 1414. Nicholas Hook is a forester and archer involved in a bitter feud with a rival family, the Perrils. The feud eventually sees Hook declared an outlaw, and he flees to France to fight as a mercenary. He is at Soissons when the French retake the city from the Burgundians and brutally sack it in such a violent manner that all of Europe is shocked. Back in England, King Henry V means to pursue his claim to the French throne. Using Soissons as a demonstration of French brutality to inflame his troops (now including Hook), he embarks on the siege of Harfleur. But the French refuse to give battle, forcing Henry to march up the coast...and a confrontation with the vastly larger French army at wooded vale called Azincourt. 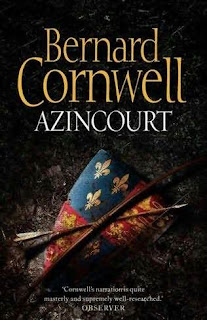 Azincourt (Agincourt is the English rendition of the name) is a historical novel depicting the epic Battle of Agincourt, regarded as an important turning point in the Hundred Years' War and the development of medieval warfare, with the supremacy of the English longbow confirmed (though, arguably, battles such as Crecy established this many years earlier). Surprisingly, it's the first English-language depiction of the battle in a novel in a century.

Bernard Cornwell is the go-to guy if you want rousing and entertaining military history. His works stretch from the fun Sharpe series to the far darker, deeper and more compelling Warlord Chronicles trilogy (his excellent take on the Arthurian legend). Azincourt, a stand-alone, falls somewhere between the two extremes.

The book is well-researched, and in an afterword Cornwell acknowledges some problems with clashing historical accounts of the battle, including recent suggestions that the numbers of British and French troops at the battle were much closer to parity than previously thought. In the end, Cornwell has elected to use the 'classic' figures of 9,000 British (mostly archers) versus 30,000 French to give the battle the lopsided feel that so inspired Shakespeare. The battle itself takes up the last quarter of the novel, with Cornwell also paying a lot of attention to the preceding campaign (the frustrating siege of Harfleur is described in some detail, as well as Henry's raising of the army and the battle between Burgundy and France the preceding year over Soissons). From a military perspective, the action is compelling and described vividly. Cornwell also sprinkles in some nice period detail, such as the fact that the Welshmen in the army constantly grumbled about being called 'English', as they had been fighting the English only a few years earlier.

Characterisation is reasonable, with Nicholas Hook being an interesting protagonist, and somewhat shadier than a lot of Cornwell's heroic protagonists. Where the book stumbles a bit is that Nicholas starts experiencing religious visions a short way into the book and becomes convinced that God is talking to him through visions of Saint Crispin and Crispinian. Whilst there are hints that this might be just Hook using these visions as a psychological took to galvanize him into action, generally the visions are accepted at face value (even by other characters that Hook confides in) and are used to get Hook out of some scrapes and dangerous situations. They verge on deus ex machina territory and reduce the tension of some parts of the novel, which is a shame. 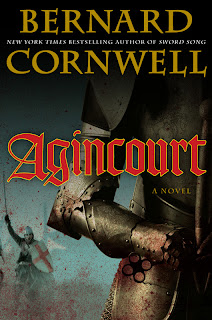 Other characters, such as the flamboyant and indefatigable Sir John Cornewaille and the French lord Lanferelle, are also excellently characterised. The sole female character of note, Melisande, is a bit more cliched though. Henry V himself also shows up several times and Cornwell depicts him as a religious man who holds that God has a plan for him he must follow whilst remaining morally superior to his enemies (in particular, Henry hangs anyone suspected of raping a nun or looting churches). This does make the infamous incident during the battle when Henry orders the prisoners executed somewhat puzzling, but then historians themselves have argued over that decision for six centuries.

Overall, Azincourt (****) is an enjoyable and solid historical adventure, its fidelity to the historical record somewhat dented by the bringing in of religious visions as an artificial plot device to drive the story forward at key moments when perhaps it wasn't necessary. But for readable, page-turning historical adventure, Cornwell delivers the goods once again. The book is out now in the UK and USA.
Posted by Adam Whitehead at 10:43