Far across the Galaxy, a dolphin-crewed starship has made a discovery of startling significance. Senior Galactic clans have dispatched fleets to find that ship, but have also decided to hold Earth and her colony worlds hostage for the data being handed over. To this end, Earth and her Tymbrimi allies have been forced to pull back most of their military to defend their homeworlds, leaving outlying colonies vulnerable. 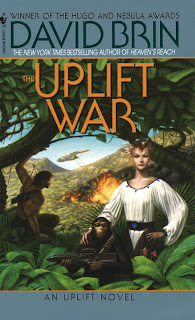 Garth is one such world, a verdant planet nearly wrecked in an ecological holocaust millennia earlier. Humans and their neo-chimpanzee clients have worked hard to restore the planet to a livable state, but now find their world under occupation by the hostile, avian Gubru. With most of the human populace imprisoned, it falls to a band of chimps, a single free human and the Tymbrimi ambassador and his daughter to resist the occupiers...and try to keep a secret that Garth has held for years.

The Uplift War is a fine SF novel which is notably different in tone to Startide Rising; in the intervening four years Brin had penned three non-Uplift novels and had become a better, more experienced writer. The Uplift War is slightly darker and much less frantic than its forerunner, with a somewhat less frivolous tone. The cast of characters is smaller, with a much greater focus on the motivations and ambitions of each individual character. Startide Rising was good at this, but the larger cast meant that there was a fair bit of 'off-screen characterisation' (i.e. we are told about great a character is but only get glimpses of it ourselves due to limited page space). Here much more is on the page, and more effective for it. Brin seems to have realised that his alien races in the previous novel were very broadly sketched, so here we get much more information and depth to the Tybrimi, Gubru and Thennanin, as well as the neo-chimpanzees whose culture and social structure are as well-realised as that of the dolphins in the previous novel.

The book is essentially a war story where the military conflict is undertaken under extremely limiting rules of war (though the ruthless Gubru show some ingenuity in getting around these restrictions), resulting in occasionally humorous comedy-of-manners moments as the chimps (who, as a junior client species, have to show respect for senior Patron races, even enemy ones, at all times) bow and use formal greetings and dialogue against the Gubru whilst simultaneously trying to blow them them with prejudice. These lighter moments are set in contrast to the more ruthless methods imposed by the invaders at other points. 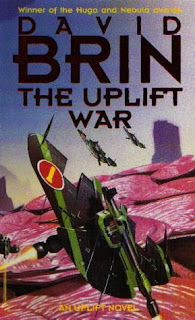 This is a long novel - over 600 pages in paperback - but moves quite quickly. Brin's prose is easy to read and quite page-turning, but bogs down a little whenever the Tymbrimi characters appear, as they express emotions through a series of psi-glyphs which appear above their heads. Rather than explaining what these glyphs mean in the text, Brin instead merely mentions their name and expects the reader to refer to the glyph-glossary at the front of the book, the sort of narrative 'cheat' more commonly encountered in epic fantasy. This interrupts the narrative flow, but fortunately becomes less common in the second half of the book.

Brin develops an ecological theme throughout the novel. The Uplift universe is based on the idea that if races were allowed to exploit each planet they colonised however they liked, then all of the Five Galaxies would be 'burned out' in a few tens of millennia (an eyeblink for a civilisation between two and three billion years of age). Even the most fanatically conservative Galactic clans are aware of this danger, so ecological maintenance and repair is a primary responsibility of all races. This also handily explains the virtual non-existence of biosphere-wrecking weapons, such as nukes and antimatter, from the Uplift universe...at least whilst the rules of war are being respected. Brin doesn't use this as an excuse to lecture - although the importing of one of Earth's endangered species to Garth to help in the ecological recovery skirts close to it - but instead as a way of intelligently developing the plot and bringing about a logical conclusion to the crisis. I suspect at the time (this book came out just before the movie Gorillas in the Mist) the ecological angle may have come across as a bit more strident.

The Uplift War (****½) is well-written, with memorable characters (flamboyant neo-chimp Filben could helm his own spin-off series) and some great ideas. There are moments of cliche and perhaps a slight feeling that everything falls out a little too neatly to allow for a happy ending (contrasted to the messy ending to Startide Rising, with multiple characters killed or abandoned in hostile territory), which dents the book a little, but overall this is a fine, colourful and entertaining space opera. The novel is available now in the USA and, second-hand, in the UK.
Posted by Adam Whitehead at 10:32

Excellent book. After reading I had to read the rest of the Uplift Saga books. They go downhill unfortunately. But this one is a must read for all SciFi fans@

I have just reread The Uplift War again. I have probably read it 4 times now. There is just so much science fiction that is intellectually shallow or that gets good PR but is disappointing that I would rather reread stuff that I know is good.

Read The Uplift War while comparing the galactics to the European powers of the last 400 years and see how relevant the story it. Think of the chimpanzees as the people of 3rd world countries.

But there are lists of SF books that include Sundiver and Startide Rising but not Uplift War when UW is actually the best of the three. I regard it more highly than Dune and Ender's Game which usually top the lists. And then they put in Hitch Hiker's Guide which is barely funny.