Mimas, 2180. After an epic all-night bender in London to celebrate his 25th birthday, Liverpudlian slob Dave Lister wakes up a billion kilometres away on one of Saturn's moons with the mother of all hangovers. Desperate to get home, Lister hits on the plan of enrolling in the Space Corps, getting a job on an Earth-bound ship and then going AWOL the second he gets home. Unfortunately, the only vessel that will have him is the city-sized Jupiter Mining Corporation ore-hauler Red Dwarf. And before it gets back to Earth, it's going all the way to Triton on a job. So it will take Lister four and a half years to get home. 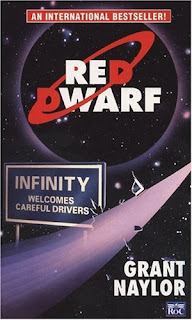 Driven to distraction by his mind-bogglingly anally-retentive bunk-mate Arnold Rimmer and heartbroken by a doomed romance with navigation officer Kristine Kochanski, Lister hits on a plan: by smuggling an unquarantined cat on board and getting caught, he gets condemned to spend the rest of the trip in temporal stasis and forfeit four years pay. Unfortunately, whilst he's in stasis, the Dwarf's fusion reactor unleashes a deadly radiation pulse which kills everyone. The ship's AI, Holly, takes the Dwarf into deep space and waits for the radiation to die off before reviving Lister...which takes three million years. Lister awakens to find his only companions are a holographic simulation of Rimmer, a senile AI and a creature which evolved from his pet cat. Their mission: to get back to Earth. Somehow.

As the above precis indicates, Infinity Welcomes Careful Drivers (originally published in 1989) is a spin-off of the British TV series Red Dwarf, published just after the airing of the show's third season. It is not a novelization of the episodes, but can be regarded as sort-of reboot of the format. Creator-producers Rob Grant and Doug Naylor were unhappy with both the small budget given to the show and how that money was spent for the first two seasons; notably, when they took over as showrunners in the third season it took a quantum leap forward in its visual style and quality. When asked by Penguin Books to write a novel based on the series, they leapt at the chance and used the opportunity to write the big-budget SF epic that the BBC's lack of money had denied to them.

The result is something far more interesting than a bog-standard TV novelization. Infinity Welcomes Careful Drivers stands alone very nicely as a solo SF novel, with no foreknowledge of the TV series required. The storylines of several episodes have been reworked into one large over-arcing narrative and the start of the story is very different, with a lot more time spent on the pre-accident Red Dwarf. This allows the writers to flesh out a number of other characters (some new, some recast versions of TV characters) before the accident takes place and they zero in on the characters of Rimmer and Lister.

These two characters are well-established in the TV show, but the authors take advantage of the novel format to really delve into their psyches and get into their internal drives and motivations. Lister benefits from this the most, since as the TV show continued Lister was sometimes sidelined in favour of the more inherently funner character of Rimmer. The Cat also benefits from added material, turning him from a rather one-note character in the first two seasons to a more rounded figure whose alien, non-human characteristics are emphasised. Holly also gets more development, with the reasons for his computer senility made clear (though current editions of the novel drop his ongoing inexplicable hatred of 1970s British footballer Kevin Keegan for legal reasons, sadly).

The novel is cleverly written, using ingredients and events from several episodes to build up a larger storyline. Some jokes are re-used a little too freely from the TV series and there's a couple of spots where the episodic building blocks betray themselves (Lister's determination to go back into stasis until they get back to Earth is handwaved away a little too easily in both the TV series and novel, but in the novel is more jarring given we move into the Nova 5 storyline almost immediately), but overall this works well.

As the novel continues, the more amusing and comic moments start giving way to moments of pathos, even tragedy, which gives the novel more depth than it first appears. It's a very funny book, but it's also one that focuses on character-building and using the humour to illuminate the story and themes. A more disappointing element is that the actual science in the novel is occasionally woeful (the writers' understanding of relativity, breaking the speed of light and, in particular, how long it takes to travel between different star systems at below lightspeed is rather lacking). Given that the TV series, particularly in later series, prided itself in the use of real science to back up the story, the somewhat shoddy application of it here is unfortunate.

Overall, Infinity Welcomes Careful Drivers (****) is a splendid comic SF novel, funny but with real depth of character. The book builds along nicely to a big climax (that riffs heavily on the movie It's a Wonderful Life) and a huge cliffhanger. The novel is available now in an omnibus edition with its sequel, Better Than Life, in the UK and USA.
Posted by Adam Whitehead at 12:51

It's been an age since I read this but two very funny moments still linger:

2) and the scene where Lister drops a cigarette butt down between his legs whilst driving. Relief is short lived when he pours scalding coffee down there to extinguish it.

To me, those two gags sum up while Infinity Welcomes Careful Drivers is a good read- it adds genuinely funny stuff that wasn't in the series (which went downhill when Kryten and the endless "Space Corps Directive jokes came aboard anyway).

Might have to dig it out for a reread now :)