A Game of Thrones - The Board Game: 2nd Edition

Fantasy Flight's A Game of Thrones: The Board Game has been a major success ever since it was first published in 2003, spawning two expansions and winning the Origins Award for best original board game. The game has recently drifted out of print and started commanding insane prices on eBay, so Fantasy Flight have decided to release a new 2nd Edition of the game, incorporating elements of the expansions into the core game. This also means an excuse to trot out some fantastic artwork of King's Landing on the new box: 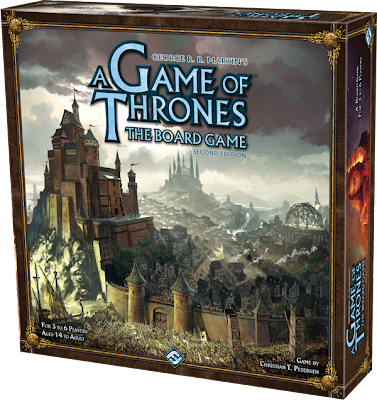 The game will be out before Christmas, and is likely to sell well given the ludicrous boost in sales the books have gotten from the TV series.
Posted by Adam Whitehead at 22:53

Email ThisBlogThis!Share to TwitterShare to FacebookShare to Pinterest
Labels: a game of thrones (board game), a song of ice and fire, george r.r. martin, news

Keep thinking about buying the game. Is it any good?

It's pretty good, particularly if you're already familiar with or a fan of games like DIPLOMACY.

I am a fan of Diplomacy! Cool.

Don't expect too much Westerosi flair, though. The map and the artworks and the names fit, but the gameplay feels much more like Diplomacy than like anything that has to do with Westeros.
That being said, mechanic-wise, the game is darn good, especially once you have the harbors that are standard in the second edition.

i bought in on a lark a long while ago but have never played it. In new condition. Probably time I sold it before this one comes out.

I have the 1st edition and absolutely love this game. It's not without its flaws but the 2nd edition will have ports which is probably the biggest weakness of the 1st edition.

Loved Diplomacy....and curse the day I sold it at a Garage Sale. What an idiot....

I'll be picking this up for sure.