A band of adventurers arrive at Easthaven, a town in the Icewind Dale region of Faerun, far to the north of most civilised lands on the far side of the Spine of the World. The town's mayor asks the adventurers to travel to Kuldahar, a village of druids in the foothills of the mountains, where they have reported strange goings-on. The adventurers agree, but are cut off in the foothills by an avalanche. Proceeding to Kuldahar on foot through an area inhabited by hostile creatures, the adventurers learn of a threat to all of Faerun that is developing in the mountains and the caverns under them, and they must defeat this threat before it's too late. 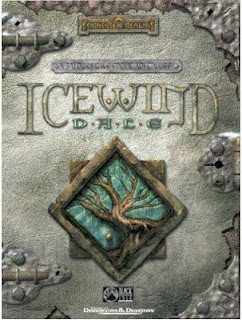 Originally released in 2000, Icewind Dale was the third of the Dungeons and Dragons games using the Infinity Engine, developed by BioWare and Black Isle (now Obsidian). These three games were effectively an attempt to corner three distinct types of fantasy: Planescape: Torment was the 'arty', literary and philosophical game, essentially a video game equivalent to Gene Wolfe, whilst Baldur's Gate was the more traditional large-scale, long, broad-based and well-characterised epic, following in the trail of Tolkien. Icewind Dale, on the other hand, was the much more combat-oriented, sword and sorcery adventure, much more of a romp than the other two. This led it to getting somewhat mixed reviews at the time, though viewed in isolation from its forebears, its positive aspects become much more apparent.

Starting off, Icewind Dale has you creating all six characters in the party, giving them names and deciding on their races and character classes. This is unlike Baldur's Gate, where you only created the leading character and then picked from a range of pre-existing companions, and also unlike Planescape: Torment, where you had a pre-generated character (though you could change his stats). This is the biggest change from the other games, since your party is totally user-generated there is little to none of the party interplay seen elsewhere. There is no possibility of romances or rivalries erupting between party-members, which removes some of the flavour and unpredictability of the earlier games, but also makes Icewind Dale a lot more old-school and traditional, which is not entirely a bad thing.

Once you've created your party, it's RPG business as usual. You can explore the opening town, solve a few puzzles (usually through item quests or combat, though you can resolve a few quests through dialogue alone) and so on before you're given the main quest. You have to fight your way through the mountains to Kuldahar (a town built in and around a colossal tree), which becomes your base of operations as you range out on various missions for the denizens of the town. These involve a lot of dungeon explorations and assaults on temples and castles held by various enemies, so a combat-focused party is a must, though the prevalence of traps and sorcerous opponents means you want to bring a thief and at least a couple of magic-users along as well.

The game is well-written, but compared to the other Infinity Engine games straightforward (indeed, somewhat refreshingly so at times). There's a few nice twists but generally what you see is what you get, and what you get is a metric ton of combat. You fight dozens of different types of enemies, from orcs to powerful enemy wizards, and amass vast quantities of loot. You also level up at a rate of knots compared to other D&D-based games. Generally speaking, if more than ten minutes go by without a ferocious combat sequence, something's gone wrong somewhere.

Luckily, Icewind Dale uses a later iteration of the Infinity Engine, with stronger graphics (including the heaven-sent ability to change the graphics resolution to something bearable on a modern PC), a friendlier interface and more options for character classes and combat (not to mention being able to carry lots more loot). In fact, if you ignore the simple fact that the game is 2D and sprite-based (there are 3D options for spell effects, but these tend to be hit and miss with modern graphics cards), it's aged very well indeed. The hand-painted environments are gorgeous, the sound and music is of a very high quality and the combat is fast and furious (though, as usual, you can hit space to pause the game at any time to issue fresh orders). The pace is only let down by the traditional D&D problem of having to rest every couple of fights to replenish spells, or having to quick-travel back to Kuldahar to unload the frankly ludicrous amounts of loot you amass on your quests at regular intervals. The game also ties in nicely (and unexpectedly) with the Icewind Dale trilogy of novels by R.A. Salvatore, despite taking place almost a century earlier (and fifteen years before Drizzt Do'Urden arrives in the area). This tie-in is very logical and satisfying, compared to the more obvious (and cheesy) cameos in the Baldur's Gate series.

The minuses are, for the most part, the obvious side-effects of the positives. Almost every situation in the game is solved by you hacking your way through it (though there are a few more original and interesting puzzles along the way), and overall the game lacks subtlety. The writing and moody black-and-white cut scenes are great, but given you spend a lot of time in combat-focused dungeons, some time can go by between plot-related events happening, which occasionally threatens to reduce the game to a hard grind. And, as great as the graphics are, the harsh snow backdrops and the very large creatures show up some issues with the engine, leading to some pixellation. The combat focus of the game also means it's pretty unforgiving and total party kills are not uncommon. As with all Infinity Engine games, but moreso here, you need to have a finger hovering over the quicksave button at almost all times and remember to save between combats, before resting, after resting, before tackling a complex trap (especially the ones which can backfire and blow up your entire party if you fail a roll) and at least every five minutes regardless of anything else.

That said, the game's not quite a brainless hack 'em up. The story, which it kicks in every now and then, is intriguing and the writing, when it does appear, is generally pretty good (as you'd expect from some of the same team behind Planescape: Torment). These elements give the game a bit more depth than its reputation suggests. In fact, if the game does suffer in departments, it's usually through comparisons to its contemporaries. Taken on its own merits and in isolation, a rewarding and impressive CRPG emerges.

Icewind Dale (****) is a fun, furious and enjoyable roleplaying game which has aged excellently, and is let down only in comparison to more story and roleplaying-focused RPGs. For those looking into a great dungeon-exploring or more action-based RPG, Icewind Dale more than satisfies.

Due to the game's age, there are a variety of ways of getting it. The Good Old Games edition may be preferable since it has been optimised to run on Windows 7 and Vista with no problems, and also includes the free expansion Trials of the Luremaster (which needs to be downloaded separately for the other editions). You can also get it as part of a triple-pack with the paid-for expansion, Heart of Winter, and Icewind Dale II (UK, USA) or as a boxed copy with just the expansion (UK, USA).
Posted by Adam Whitehead at 10:40

This was the first cRPG I ever plated...for about what, 15 minutes? I loved those fifteen minutes, and can remember being overjoyed to find out that a sequel had just been released way back when. I loved Icewind Dale 2, I almost want to buy this and see whether the connection is stronger then I remember. It always seemed slightly tenuous...

Have to say, I never really cared for Icewind Dale. It was such a let down after the Baldur's Gate games and Torment. Thankfully Obsidian rebounded and went on to do much, much better stuff (like the superb Mask of the Betrayer).

Just want to say, these reviews are appreciated. This is a game I never got around to playing but always meant to; now I think I might whip it out and give it a shot. Thanks again.

Blogger really needs an edit function, I mean plated? WTF was I even thinking?

I just wanted to quickly ask Wert, whether you'll be reviewing Fallout: New Vegas at any point? Clearly you're on a bit of an RPG binge, what with this and Messiah of Might and Magic. I was wondering, if you had played F:NV, what you thought?

I'm still waiting for it to download of Steam, two days and counting...

I'm waiting for the Game of the Year Edition of New Vegas, probably out around Christmas. I really enjoyed FO3, but in retrospect paying £30 for the game and then £5 each for the four expansions made it more expensive than it needed to be.

Technically, my PC can't really run New Vegas, but then it's not supposed to run FO3 and actually did a really good job with it, so hopefully this is the same :-)

Ah that makes sense, I was just blinded by the Steam sale. Now I'm blinded by all the modding I'm going to do...