The full cast of dwarves for The Hobbit movies has been unveiled in costume. 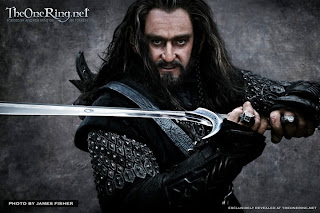 Richard Armitage is playing King Thorin Oakenshield, the leader of the band of dwarves who set out to reclaim Erebor, the Lonely Mountain, from the dragon Smaug. He is seen here wielding his sword Orcrist. 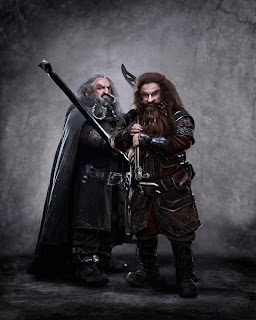 John Callen and Peter Hambleton are playing Oin and Gloin respectively. Gloin is the father of Gimli (from The Lord of the Rings) and they do a good job here of making him look like John Rhys-Davies' father. 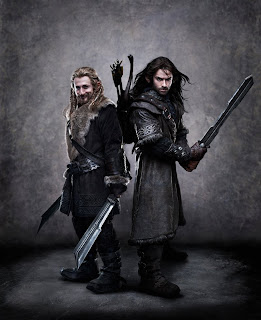 Dean O'Gorman and Aidan Turner are playing brothers Fili and Kili. O'Gorman is a veteran of the Xena and Hercules franchises, whilst Turner is well-known for his role as a vampire in three seasons of Being Human (he left Being Human to star in these films). 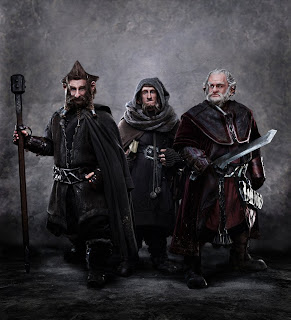 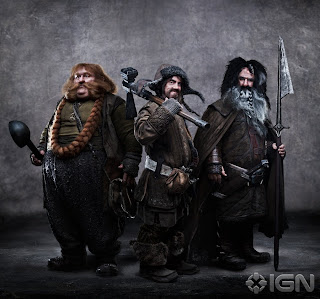 Stephen Hunter, James Nesbitt and William Kircher as Bombur, Bofur and Bifur respectively. Nesbitt is best-known from his many comedic roles on British television, most famously Cold Feet. 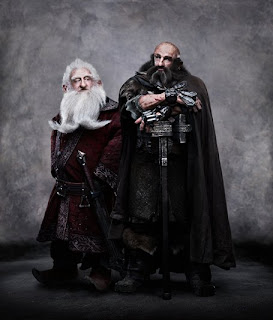 Ken Stott and Graham McTavish as Balin and Dwalin. Stott is a very well-respected Scottish actor with a long list of TV and film credits, but he's pretty much unrecognisable under the dwarven make-up. Fellow Scot McTavish is a veteran of numerous TV projects, including the final season of Red Dwarf.

Interesting. Not strictly accurate to the books (Thorin is looking like he's about to yell, "Today is a good day to die!") but giving each dwarf an individual look and character is important to differentiate them in the film. Looking forward to seeing them in action. The first Hobbit movie, An Unexpected Journey, is due out on 14 December 2012.
Posted by Adam Whitehead at 08:14

Having all 13 dwarves appear as individuals with distinct characteristics is probably one of the biggest problems facing Peter Jackson. They could easily come of as being one note.

Thorin Oakenshield has a Metalhead vibe. Someone pointed out to me yesterday that Kili's one hand apparently has 6 fingers. :)

I love this!! Thanks for putting all these pics on one post! Movies have stunk terribly after the Lord Of The Rings Trilogy came out.......The Hobbit is something I look forward to in the coming years. These dwarves are wonderful.

I think they all look pretty cool and "Dwarf-ish" - except for Fili and Kili.. it is kind of ridiculous trying to make "sexy" middle-earth dwarves...
Thorin doesn't look that great either - however, I trust PJ and I am sure all will come together on screen and be totally awesome! I can't wait!!

There's a typo in your text - it should say "Nesbitt is best-known for playing exactly the same character in everything he's ever been in, most famously the Yellow Pages adverts and Cold Feet."

Thorin looks a bit too Klingonish to me.

@ Anon 18.24. Really? In Bloody Sunday and Jekyll as well? I've seen neither, but I'm very surprised he was playing a comic character in either. More like stunned, actually. But, if you say so... (shrugs)