So, we spent what felt like a century waiting for Game of Thrones to start, and it's gone already. After an at times spotty opening few episodes, the latter half of the season has seen things tighten up considerably as full-scale war erupts between the Starks and Lannisters and the wheels are set in motion for Season 2.

The penultimate episode, Baelor, opens with Eddard Stark and Varys having a quiet conversation in which Varys' cool breaks as he desperately pleads with Ned to do the right thing for the realm and for his daughter. This is a stand-out scene simply because the two actors bring their A-game to it and the dialogue is pretty good (I get the feeling Benioff and Weiss picked up some lessons from GRRM's episode, as the last two episodes of the season are much tighter in dialogue than some of the earlier ones). Conleth Hill needs a special nod as Varys, pretty much nailing the character from the books and bringing a dash of extra sympathy as well. I hope he gets promoted to the main title cast next year, as he certainly deserves it. 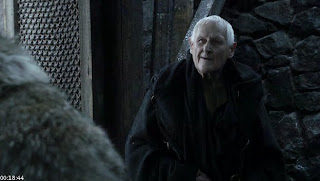 "Yes, I'm the uncle of the Mad King. You may also remember me from the sitcom Porridge, with Ronnie Barker."

We also get the iconic scene from the novels where Catelyn has to negotiated with the thoroughly unpleasant Lord Walder Frey. David Bradley - best-known as Argus Filch from the Harry Potter movies and the hoarder of an inexplicably vast arsenal of weaponry in Hot Fuzz - plays this role with relish and steals the scene, helped by some repugnant dialogue revolving around his new wife (who, at 15, is a rare instance of a character being aged down from the books to make the situation more uncomfortable). A great scene, as is the one where Cat has to explain the terms to Robb, who has to manfully accept them whilst Theon is giggling like an idiot in the corner. Elsewhere on the Wall, Jon gets an impressive new sword and learns Maester Aemon's backstory. Excellent work from venerable British character actor Peter Vaughan, who has been around for donkey's years. 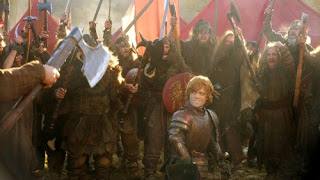 Peter Dinklage has done great work as Tyrion all season, but in this episode steps up with a funny scene where he, Bronn (Jerome Flynn) and Shae (an offbeat Sibel Kekilli) play a drinking game which leads into Tyrion telling the story of his first, brief, idiotic marriage. Some people dislike this scene, but I think it works in establishing a lot of Tyrion's character, his belief in himself and also shows his vulnerabilities. TV Shae is far more enigmatic than her book character (who is much closer to Ros) and also a match for Tyrion's wits, which is an interesting direction to take. Tyrion making his battle speech to the hill tribes who get all riled up for war is also a great moment, neatly subverted by him then getting smacked in the face and missing out on the whole conflict. It's still a disappointing and slightly cheap-arsed way of avoiding filming an expensive battle (though the producers claim they ran out of time, not money, and couldn't do it justice), but I suppose an entertaining alternative. 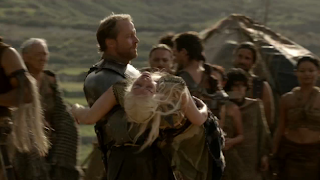 Saturday nights out in Lhazar could be rough.

Meanwhile, Daenerys proves herself to be a bit too trusting when she entrusts Drogo's life to Crazy Witch Woman Whose Whole Home Drogo's Men Have Just Destroyed and Looted (and Killed All Her Friends For Good Measure). Maybe she's been reading Ned Stark's self-help book on who to trust? Cue lots of crazy bonkers wailing and weird stuff going down, during which Jorah Mormont gets to follow up on his debate with Rakharo in the third episode about the worthiness of the Westerosi and Dothraki ways of war by taking out the murderous Qotho. What's interesting is that the writing has been good enough to set up Qotho's actions so they are comprehensible from his own viewpoint: he's best friends and blood brother to Khal Drogo, they've fought hundreds of battles together, and suddenly his friend's new foreign wife has done something dishonorable and disgraceful to him. Yeah, I can see where he's coming from (and ultimately his character assessment of Mirri Maz Duur turns out to be the accurate one).

Of course, the episode hinges on its ending. That scene, the one that's shocked so many book readers for the past decade and a half. HBO go to town for this one, using a huge, real Maltese city square and a large crowd of extras, briefly making King's Landing actually look like a real, bustling city (something that's been a bit lacking in earlier episodes). The actors are all great in this moment, especially Jack Gleeson as the supremely murderable Joffrey who responds to the crowd's yell like he's a rock star. As well as Gleeson, Sean Bean and Maisie Williams do excellent work in this scene as Eddard finally faces his fates and Arya futilely tries to do something to help, only to be rescued. A well-played scene, with the sound fading out at a pitch-perfect moment. 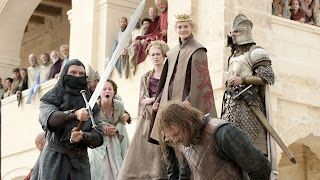 After all that, the final episode, Fire and Blood, is a bit quieter. Much of the episode revolves around the fall-out from Ned's death, the reactions to it by other characters and the political changes it triggers. This makes for a talky episode with some great moments that seem low-key, but are setting up the following season: Varys and Littlefinger's mutual admiration/disgust conversation and particularly Pycelle's somewhat random-seeming sexposition scene with Ros in which we discover he's a bit more sprightly than we might expect for someone of his age.

We also finally get a scene between Sansa and Sandor Clegane, which is welcome but also a bit strange, given that the set-up scene from the book was changed to dialogue between Sansa and Littlefinger instead. Of all the characters in the book, the one most ill-served so far by this adaptation is Sandor, and this scene suggests his relationship with Sansa will play a bigger role in Season 2 and they were delaying it until then rather than abandoning it altogether, which is a welcome move (especially if they can make his scar look a bit better for Season 2; at the moment is looks like he's stuck a mudpack over the side of his face).

At the Stark camp, we get the first what could a regular feature, as Catelyn beats on the captive Jaime, but the focus is on Robb being declared the King in the North. An iconic scene from the books, in the TV show it lacks the epic gravitas of the literary scene, due to a change in location (from an indoor hall in Riverrun to a ruined keep nearby), but is reasonably well-sold, particularly Theon's "Hey bro, my sword is yours," speech which is eye-rollingly cheesy (likely deliberately, given what an insufferable prat Theon is). We also get a nice mirrored scene where the Lannisters debate their strategy and Tywin decides to send Tyrion to court, and we see a brief moment where Tyrion seems to think he and his father can improve their relationship through mutual respect. It's a different take to the books (where Tyrion realises that his father is only using him as he has no-one else left to turn to), but more effective for the potential emotional development of Tyrion in the second season. 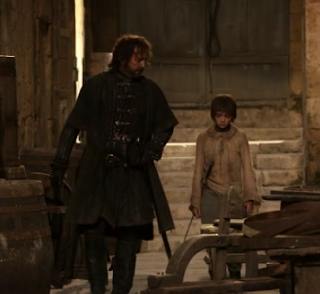 "Right, here's our cover story. Your name's Oliver and you're an orphan. My name's Fagin...wait, I'm thinking of something else there."

Arya, meanwhile, escapes from King's Landing with the help of Yoren. The producers introduce some new characters here to help speed the opening of Season 2, so we meet Hot Pie and Lommy Greenhands rather earlier than we did in the books, and we even get a glimpse of a man in a hood in a prisoner cart who may well be a certain Lorathi assassin. It's a good way of rounding off Arya's story for Season 1 and setting her up for the following year.

At the Wall, we get an excellent, rousing speech from Lord Commander Mormont as he gathers the Night's Watch together and marches out to deliver some whoop-ass on anyone who gets in their way. We also get a great scene where Jon's new friends convince him to stay by reciting their oaths to him, which is creepily effective. 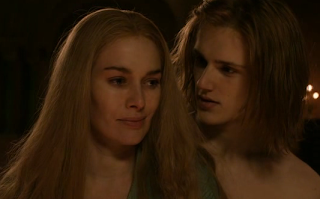 Events return to the east, where Daenerys is well and truly cheesed off. Having been pushed around, bought, sold, tricked, hoodwinked, near-poisoned and then fooled into essentially killing her husband and child, Dany decides to turn pyromaniac, throwing her husband's corpse, her dragon eggs and one over-confident witch ("You will not hear me scream....AAAARRGH!") onto a bonfire and then leaping on for good measure. When the ashes settle, she has three newly-hatched dragons (and all her hair still, which we won't quibble over) and a desire to lay down some vengeance on Westeros. As a way of making sure people come back for Season 2, you're not going to get much better than that. 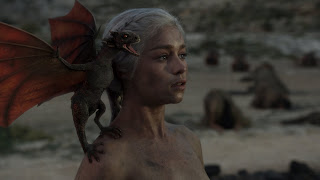 So, a quieter episode, but one that builds up to and earns its climactic scenes very well and leaves everything in chaos for the second season to come.

Overall, Game of Thrones' first season has been pretty strong. It's had too many slow-paced scenes of clumsy exposition, way too much nudity and has dropped some of the more interesting, subtle and thematic elements from the books. On the other hand, the writing has been pretty strong and the last three episodes particularly show that the series could develop into the best thing on TV if it plays to its strengths - most notably the fantastic cast - and reduces the problematic elements.

Thanks for the reviews, Adam. Your take has been slightly different from many other book-readers' reviews and opinions I've read, which is refreshing even where I disagree.

That said, one of the points I disagree on leads me to a fantastic article on Salon about the nudity so many find problematic. Great rebuttal to a very common criticism (one of the few) of this excellent season of television.

It feels wrong, but I'm enjoying the image captions a bit too much. :))
Thanks for the review, it is a good read even after watching the episodes.

Isn't Maester Aemon Uncle to King Jahaerys? Did they skip that in the show?

As far as I can tell, Jaehaerys II has been eliminated from the succession. Aemon states clearly that Egg is the Mad King's father.

I cannot wait to get these on DVD, anyone know the release date? I saw the first episode, but decided I wanted to watch them at once over a weekend to keep it fresh. Sounds dynamite man! : )

I've mixed feelings over the series tbh. I started reading the books when the first UK edition of A Game of Thrones came out, so they've been with me for donkeys years now.

I don't think I ever got the impression of scale that the book gives. Obviously budgetary issues will effect this but I never get the impression Khal Drogo, Twyin or Robb have an army of more than about 20 people and it's really only one step above knights clacking coconut shells together for horses.

Still, some of the scenes have been genuinely brilliant, and I could watch the few scenes with Syrio over and over :)

Great review (as always!). Just a quick edit comment, I think you mean, "As a way of making sure people come back for Season 2, you're not going to get much better than that." rather than Season 1 as you have posted. It's the third paragraph from the end!