Subterranean Press have released their cover art for their forthcoming limited edition of Deadhouse Gates, the second Malazan novel by Steven Erikson, with art by J.K Drummond. 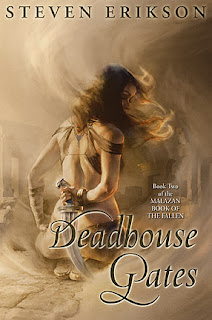 Hmm. It's not exactly as impressive as the Komarck cover for Gardens of the Moon. 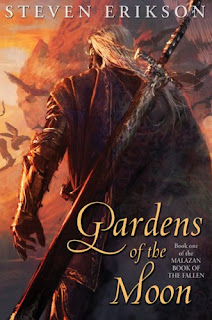 But still, it could be a lot worse. 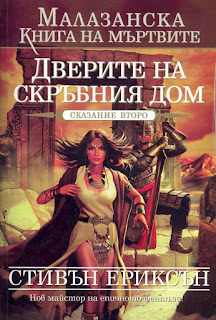 ARRGH! So 80's it hurts! Burn it with fire!
That's the actual original American cover art, which was so horrendous that even Tor - who pay actual money to Darrell K. Sweet for his work, remember - couldn't stomach it and ditched it. But for some reason it was inflicted on innocent Bulgarian readers instead. What did the Bulgarians ever do to Tor to deserve such harsh treatment?

It'll also be interesting to see if SubPress step up their release schedule a little. At this rate it'll be 2027 before the limited editions of all ten books are out, which is a long time to collect a complete set.
Posted by Adam Whitehead at 02:28

ugh, Darrell K. Sweet is such an awful artist. I hate to admit it, but one of the reasons I put off reading the WoT series for so long is that the front cover artwork is so TERRIBLE. I thought to myself, any company who slaps this kind of crap on their cover must not really care about whats in its pages.

Yeah, a nice bit of art. But, considering the book and everything that takes place in it, that's pretty underwhelming shit.

It's not the worst cover I've ever seen, but it's not really reflective of the book. Why focus on Felisin? (I assume that's meant to be Felisin) - Why wouldn't you illustrate Coltaine and the Chain of Dogs? The US cover for The Bonehunters with the overturned wagon is the worst thing I've seen on a Malazan cover.

And everytime I see that SubPress cover it still says "Pardens of the Moon"...

Yeah, not sold on that at all, not entirely sure why they decided to ask for that image in the first place.

Am speechless about the old US edition, I've got a US hardback for Gardens and that's awful - maybe they ordered both at the same time and ditched the second after people laughed at the first?

i like the deadhouse gate cover.
even better than the gardens of moon artwork.
maybe i just like women...

eeks -- that deadhouse gate cover makes it look like a romance novel ... i'm unsure if I would read that book in public ... will get it on kindle instead

I've never understood the American covers thing full stop. I had a Chronicles of Thomas Covenant book from the US in the 90's and that looked as twee as the WoT ones.

It's a gorgeous cover, but I'm not sure it fits the mood of the series. Still, I can't say I don't like it.

Curious Orange: I always see "Qardens of the Moon" (and now, "Deadhouse Qates".)

Yes Darrell K Sweet's covers aren't that good but credit to him for making Rand Al Thor look like Nicholas Cage on the cover of Eye Of The World :D