The new WHEEL OF TIME RPG: what do we know?

A new Wheel of Time computer game is currently in development as a joint project between Red Eagle Entertainment - the rights-holding company - and Obsidian, a well-respected computer RPG studio. Both companies have been pretty quiet about the game so far, but some interesting news has emerged in the last few weeks which may impact on it. 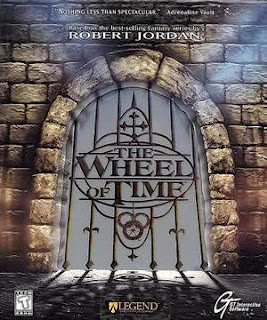 The box art from the existing Wheel of Time game, released in 1999.
Who's involved?
Red Eagle Entertainment bought movie, computer game and graphic novel adaptation rights based on The Wheel of Time novels from Robert Jordan before he passed away. They have been developing a film based on the first novel in the series, The Eye of the World, since 2007 with Universal Pictures. Despite repeated claims that the film is in active development, nothing substantive has been revealed about the film so far. Red Eagle were also involved in the shambolic adaptation of New Spring as a graphic novel, which took several years to be released in full.

Obsidian Entertainment are one of the most successful developers of modern computer RPGs. Most of their team was reconstituted from the ashes of Black Isle, which collapsed in the early 2000s. As Black Isle, they created the Fallout franchise, developing the first two games in the series. They then made Planescape: Torment, probably the finest CRPG ever made, followed by the entertaining Icewind Dale series of games. As Obsidian, they have made and released Knights of the Old Republic II: The Sith Lords, Neverwinter Nights II and its two expansions, Alpha Protocol, Fallout: New Vegas and several expansions and, most recently, Dungeon Siege III. The Wheel of Time game is currently their only announced title in development, though it's not uncommon for a company to have several unannounced titles in early stages of development at a time.


What do we know?
Red Eagle are developing two Wheel of Time games. The first is a single-player RPG, the second is an online multiplayer game. Obsidian and Red Eagle are working on the singler-player RPG at this time. The status of the online game is unknown, but given the expense of developing an MMORPG, may be on hold until either the other game or the film has come out and boosted the franchise's profile.

The single-player RPG has the simple working title Wheel of Time. According to Red Eagle, the game will not necessarily be based on the books or use the characters from the books, and may be set during an earlier time period (similar to the previous Wheel of Time game, a fast-paced first-persion shooter - er, channeller - released in 1999).


What's the timeline?
On 12 February 2010, Red Eagle issued a press release confirming they were working with Obsidian on the game. Obsidian simultaneously issued their own press release. Red Eagle haven't handed the whole project over to Obsidian, but are working on the story, design documents and some of the technical aspects of the game, whilst Obsidian are providing the bulk of the technical manpower, expertise and, of course, experience. Chris Avellone, the extremely well-respected writer of many of Black Isle and Obsidian's most iconic games, is apparently developing the script, which is excellent news.

"The Wheel of Time is one of the greatest and well-received fantasy series of all time. Games set in Robert Jordan's universe have the chance to deliver on the epic storylines and the complex characters that the series is known for - and this is one of Obsidian's strengths. It's a natural fit." - Chris Avellone, Chief Creative Officer of Obsidian Entertainment.

On 25 February 2011, Obsidian apparently confirmed that the game was in development, but only a small team had been working on it, presumably because the main game design teams had had to ship three full games in less than a year (Alpha Protocol, New Vegas and Dungeon Siege III). With those projects done, the way seems clear for Wheel of Time to head into full development mode, though Obsidian also teased a number of other projects they had unannounced.

"There is a property that we are working on, that we can't talk about yet. It's something we've been working on since the middle of last year, just with a small team, it's only been five or ten people. It's a license that you would go, well you gotta do it. It's not a license where it's, 'Ok, we'll take that and we can do something with it.' It's more like, well that's once in a lifetime." - Feargus Urquhart, head of Obsidian.

More recently, Obsidian have posted an advertisement looking for 2D character animators for their new, "highly stylised, high profile roleplaying game". Whilst some fans have immediately assumed this was for the Wheel of Time project, this isn't necessarily the case. As mentioned in the above interview, Obsidian have been lobbying Atari to make Icewind Dale III as a low-cost, low-risk project and it's possible that one way of doing this is to create a new 2D RPG based on the old Infinity Engine (monstrously upgraded to modern standards of course). So this may be a hint that that project is moving forward. On the other hand, even a modern 3D RPG (which Wheel of Time would likely have to be to be commercially viable) might still use 2D art assets in some fashion, which is what the recruitment drive could be about.


When are we likely to see it?
If the Wheel of Time game has just gone into full development mode, I suspect it'll be the very end of 2012 at the earliest, more likely some time the following year. However, we may get more news and screenshots much earlier than that. It depends on how things go.
Posted by Adam Whitehead at 11:12

The first Legend version still has a multiplayer community, loads of good times with Balefire maps, Ter'angreal deathmatch, and cap-the-flag gametype with Seals.

I'm not really confident in Obsidian's capabilities to deliver a proper game.

They royally botched Kotor 2 by releasing a rushed, unfinished and bug ridden product. NN2 I never even finished, despite four different attempts after patch releases, because various crashes and save game corruptions made the game unplayable to me.

Black Isle was great, but all Obsidian does is ruin promising projects by making half finished games.

I wouldn't be worried about Obsidian's work, Red Eagle has almost no reputation. Obsidian games may have their flaws, but they are ambitious and if you are patient enough to wait for the patches, extremely rewarding. Obsidian has also continued to improve, with Fallout: New Vegas, Alpha Protocol, and Dungeon Siege 3 all being unique experiences that do storytelling and character development better than anyone else.

NWN2 is a master-class in CRPG story-telling; as is any other RPG by Obsidian. They are, imo, the undisputed masters of computer RPG's. RedEagle would've made a mistake to go with anyone else. That being said, I sense that RedEagle might be holding many of the creative strings on this project. I understand that Robert Jordan may have disliked them before he died. If they get too controlling over the project, it might restrict what Obsidian can do. I hope this won't happen!

now in 2012 and still no update on this game crazy

I still can't believe
The soundtrack to the original game
Isn't a specific artist :-\
Does anyone have the low down
On the artists that performed
the original pc game's mp3's?

Still nothing. I think it died long ago...

This is one of the saddest stories I have seen recently.