Chuck Bartowski works for a huge electronics store in Los Angeles, Buy More, but is still annoyed at being framed for a misdemeanour he didn't commit which led to him getting thrown out of Stanford University several years earlier. Bryce Larkin, Chuck's former best friend and the guy who framed him, sends Chuck a mysterious email which causes him to pass out. When he wakes up, he discovers that he has downloaded the Intersect - the entire American secret database on international criminals, terrorists and other restricted subjects - into his brain. With the Intersect itself destroyed and Larkin dead, this means that the CIA and NSA need Chuck to help them defend American interests. Thus, he is forced into a double life of maintaining his working life at the Buy More whilst also helping CIA agent Sarah Walker and NSA agent John Casey fight international crime using his subliminal knowledge. 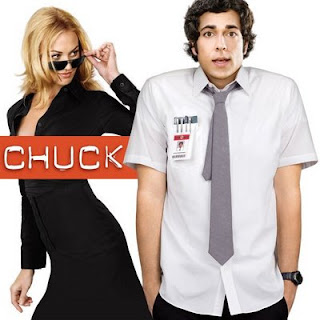 Right from the start, Chuck puts its colours on the mast: this is going to be a show where the idea is to watch it and enjoy yourself, with even the vaguest hint of realism thrown out of the door. In an age where American network shows are being ignored in favour of 'edgy' cable series, it's a relief to find a show that is just so much damn fun.

Chuck works on a number of levels. The casting is excellent, with Zachary Levi making for an appealing protagonist, balancing geekiness with likability and a growing ability to cope with the crazy situations he's been thrown into. The ridiculously attractive Yvonne Strahovski makes for a great straight-woman as Sarah, who pulls off the 'coldly professional CIA agent' character well but then develops the role to become more conflicted in her loyalties as the season progresses. The mighty Adam Baldwin - Jayne from Firefly - is also great as Casey, whose first instinct in any situation is extreme violence. The supporting cast, notably Chuck's family and his fellow workers at the Buy More, are also well-cast and entertaining.

The show also has a great deal of geek-cred. One episode hinges on Chuck and his best friend Morgan (Joshua Gomez) being able to carry off their Halloween trick of dressing up as a sandworm from the Dune books, whilst in another Chuck reminisces on bonding with an ex-girlfriend over playing EverQuest. Another episode uses (classic 1980s text adventure) Zork references as a plot point. References range from the pretty obvious to the fairly obscure, and catching them is fun in itself.

The series follows the now-traditional structure of having a season-spanning arc mixed up with lots of stand-alone episodes. The arc is actually fairly slight (there are hints that the NSA are building the Intersect 2.0 and indicating that once it is ready, Chuck will be expendable) but there are some ongoing character arcs and developments from episode to episode that work quite well. One character point - that Morgan has a huge crush on Chuck's sister - is actually a bit stalker-ish in the first couple of episodes due to the writers overegging it, but they sensibly pull it back and then dispose of it after giving Morgan another girlfriend later on, resolving the issue before it becomes too much of a problem.

The individual episode storylines are mostly enjoyable, particularly the season finale in which the entire Buy More is cleared out after listening devices are discovered and the characters have to discover the fate of the store manager's stuffed fish. Something that is slightly problematic is that the somewhat mundane storylines at the Buy More or involving Chuck's family are often more enjoyable than the spy stuff, which is often formulaic (though always watchable). There are problems that ideas are reused a few too many times (particularly with Casey getting into trouble with a beautiful female agent which goes a bit wrong, which happens twice within a few episodes), but overall the series carries its stories off with aplomb. The show may actually have been helped by the first season being cut short by the 2007-08 Writer's Strike, allowing the producers to end the season early before too many more story points were revisited and prepare themselves for the second season.

The first season of Chuck (****) is very entertaining, amusing and nicely geeky, with genuine wit and charm overcoming its more formulaic and cliched elements. The show balances humour and drama quite well, and the overall package is highly enjoyable. The season is available now on DVD in the UK and USA.
Posted by Adam Whitehead at 21:00

I love this show....'ol Mr. Zachary Levi is an old school buddy of mine, so I had to watch the show, and you're right. He's fantastic in it. The show is certainly a fun ride, thought not one for deep consideration, just simple enjoyment. : )

Loved the show. Especially the first season! Though, it's cancelled now, right?!?

Not exactly cancelled. The studio and producers apparently decided to wrap up the series in a 13-episode (I believe) fifth season, which starts airing later this year. So it's ending, but it will at least have an ending.

I'm just glad I've got another four seasons to go :-)

I love this show! Caught the pilot when it first aired by accident, and I've seen pretty much every episode since. It's just so much fun. The characters are great, and actually surprisingly dynamic over the course of the series. So glad it's still got one more season left!

I'm glad to see this get a good review. It's a show I've loved right from the start. Good old fashioned fun.

This show is definitely the "buffy" show of the moment. The first 3 seasons were great fun but season 4 had something missing and after the midseason finale, i've found the show tiring to the point I've put it to rest for a while. I think this may be because the show was given a last minute extra half season and maybe it's just rushed?
The thing I think is missing in later seasons is the "ordinary life" aspects as I used to enjoy how a crisis in the store was often as troublesome as a mission.

It's great they were given a half-season to give the show a proper wrap up as living in the constant limbo of cancellation/renewal was starting to affect the story (it was amazing they balanced it so well for 3 seasons). I'm confident with that knowledge the makers of the show will give us an excellent end to the show.

Adam Baldwin is great throughout and there are some excellent guest stars too.

I liked this show for the first two seasons but like every show that "teases" a romantic interest between the male and female protagonists, it got REALLY old quickly once the romance came to fruition. You can tell the writers really boxed themselves into a corner and the trials and tribulations of Chuck and Sarah's romance were pretty painful. The Chuck's mom storyline was pretty boring too.

Okay, Chuck ended last night. And the ending was really good. If you're wondering, the rest of the series really is worth your time.