Stannis and Melisandre cast for GAME OF THRONES

HBO has confirmed that actors Stephen Dillane and Carice van Houten have been added to the cast of the second season of Game of Thrones. 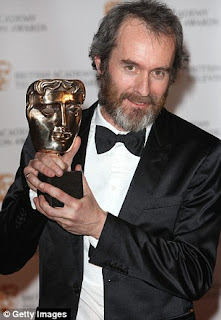 Stephen Dillane is a British actor best known internationally for playing Thomas Jefferson in the excellent HBO mini-series John Adams. His studied, intense but slightly cold performance earned him an Emmy nomination. He has also appeared in the movies King Arthur, The Hours and the Mel Gibson version of Hamlet. 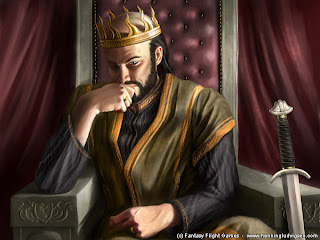 Dillane is playing the role of Lord Stannis Baratheon. The younger brother of King Robert and the older brother of Lord Renly, Stannis a cold, battle-hardened martinet, known to be without humour or mercy. He always does the 'right' thing, no matter the cost. During Robert's Rebellion he held the Baratheon castle of Storm's End against siege for a full year, reduced to eating rats and a few cargo holds full of onions smuggled into the castle by the pirate Davos. During the Greyjoy Rebellion, Stannis' fleet caught the Greyjoy armada unprepared in the Fair Isle Straits and destroyed it in a pincer movement, allowing King Robert's forces to storm Pyke. Since Robert came to power, Stannis has served as Lord of Dragonstone, commanding the ancestral stronghold of the Targaryens out in Blackwater Bay.

At the end of the first season of Game of Thrones, Eddard Stark sent a message to Stannis informing him that his supposed nephew, Joffrey, was a bastard born of incest, and that he was the rightful heir to the Iron Throne. Stannis has since claimed the throne, but faces a battle against not just Joffrey and the Lannisters, but also his own younger brother Renly, who was also claimed the throne with the support of the extremely powerful House Tyrell. 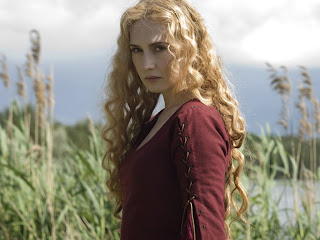 Carice van Houten is a Dutch actress who has won three Golden Calf awards for various roles. In English-language cinema, she is best-known for her Melisandre-like turn in Black Death (appearing alongside Game of Thrones alums Sean Bean and Emun Elliott), as well as appearances in Repo Men and Valkyrie. 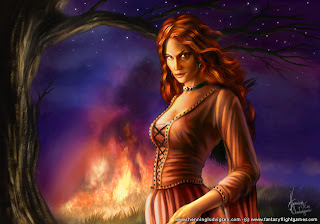 In Thrones van Houten is playing the role of Melisandre of Asshai, a priestess of the red god R'hllor, Lord of Light, who is obscure in Westeros. Melisandre has established herself on Dragonstone as an advisor to Stannis Baratheon and his family.
Posted by Adam Whitehead at 18:55

Idiot, Stannis is the eldest brother.

Ah well! I was still rooting for Eccleston!

Out of Renly and Stannis, yes, Stannis is the eldest brother (Robert being dead at this point).

Stannis is younger than Robert, however, and the middle of the three Baratheon sons. This is a very simple premise, spelled out explicitly in books and the appendices so clearly that it is surprising - and somewhat worrying - that so many people seem to fail to get it.

Renly: "You served Robert, why not me?"

Stannis: "Robert was my elder brother, you are the younger."

Van Houten: meh. Didn't like her in Black Death, but then she wasn't given much to work with (not an awful film, but not exactly rich with nuance and subtlety). Fear she may be OTT as Melisandre, rather than toning her down into believability, but I'm willing to wait and see.

Dillane: fascinating! His appearance and his role in JA are totally, utterly at odds with how I see Stannis. Yes, TJ was cold and driven, but he made you feel sorry for him - I'm not sure he can convey the shear THREAT that Stannis poses in ACOK. Jefferson is more like Stannis from later books - that sort of "I look beaten but I'll never surrender" sort of stubborn determination to be a nuisance - but not much like the "I will CRUSH YOU ALL!" Stannis from ACOK. BUT: I thought Dillane was show-stealingly brilliant in John Adams, and it was a brilliant show to steal, against a very fine cast of actors. So I certainly wouldn't write him off, and even if he doesn't give us book-Stannis, I'm sure he'll be fascinating to watch. At least I'm confident he can make a cold character sympathetic, which was one of my worries with the character (as I'm a Stannis fan myself).

Stannis: well cast.
Melisandre: terrible choice to go with Carice. The girl just can't act with all due respect for my fellow country woman.

Game of thrones is, probably, the best TV serie that I've ever seen.
It's raw and real like none, and reflects the European Middle Age (althought was fantastic, not historic) in all over its dimension.
The characters and the script have an incredible depth.
Perhaps, the sex scenes and explicit violence are too frequent.