Three million years into deep space on the mining ship Red Dwarf, the last human alive, Dave Lister, wants nothing else other than to go home. Instead, he has become trapped in a virtual reality computer game, Better Than Life. In his fantasy he is a resident of Bedford Falls (the town from his favourite movie, It's a Wonderful Life), married to Kristine Kochanski with twin sons. The Cat has his own Gothic castle, where his every whim is attended to by Valkyrie warriors in skimpy underwear and he amuses himself by going dog-hunting on his favourite fire-breathing yak. Service mechanoid Kryten has mountains of washing-up to get done. And Rimmer is a multi-billionaire, married to the most beautiful woman alive and using a time machine to get 'the lads' (General George S. Patton, Julius Caesar and Napoleon Bonaparte) together every now and then so he can beat them at Risk. Outside the game, the AI Holly embarks on a mission to return his IQ to its previous level of 6,000, but unfortunately relies on the advice of a sentient toaster, with catastrophic results. 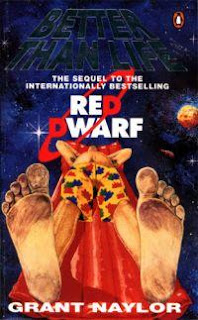 The problem with the game is that it is almost impossible to escape from, and, eventually it will kill you. However, Rimmer's psyche is so ridiculously self-loathing that he cannot stand to see himself or his friends happy, and it sets out to destroy them...

Better Than Life, published in 1990 when the Red Dwarf TV show was on hiatus for a year, is the follow-up to Infinity Welcomes Careful Drivers and is the last novel written by Rob Grant and Doug Naylor as a team. After this book they concentrated on the TV show for a few years until their writing partnership dissolved in the mid-1990s. They would return with solo Red Dwarf novels further down the line: Naylor's disappointing Last Human in 1995 and Grant's superior Backwards in 1996.

Better Than Life itself is an improvement over the first novel in several areas. First of all, the already-strong characterisation is deeper and more interesting than before, getting into the psyches of these damaged people, laid bare by the game. The contrast between Lister's fantasy, in which he just wants an enjoyable job and a loving family in a happy community, and Rimmer's world of corporate jets, time machines, gorgeous supermodels and a ridiculously huge manhood, is hilariously emphasised, though the Cat is a bit one-note in the book. We have a new character in the shape of the Talkie Toaster ($£19.99 + tax), whom Holly rather unwisely activates to provide him with some companionship. Unfortunately, the Toaster is completely and totally obsessed with force-feeding everyone around him with toast. It's a great gag, but one in the TV series that was wisely used in only a few scenes and then dispensed with. He hangs around for longer in the novel and starts getting annoying but, realising this, the authors do some very funny things with his character to turn this into an asset, and his eventual fate is amusing.

As with the first novel, the authors re-work the plot of several episodes but use them to form a longer narrative. So, as well as the Better Than Life episode itself (which is more of an inspiration than a direct contribution) we get the Polymorph showing up, an interaction with a realm where time runs backwards, Rimmer and Lister being marooned together and having to help each other survive, and a close interaction with a black hole (a white hole in the TV series). Unlike the first book, where the episodic nature of the plot was more obvious, here events are more successfully combined to create a more cohesive story that stands free from the TV series.

Again, there are elements of pathos and tragedy that enter the story, particularly towards the end which is unexpectedly emotional (and then brilliantly subverted in the opening to Backwards, the chronologically-succeeding novel). But Lister learning the eventual fate of Earth and rising to become the leader of an entire community (kind of) is well-handled.

Better Than Life (****½) is a stronger novel than its forebear, cleverer, funnier and more enjoyable than that already-strong book. It is available now in omnibus form with its predecessor in the UK and USA.
Posted by Adam Whitehead at 10:06