For a laugh, I recently went through the original run of Transformers comics on the Westeros.org forum. This incorporated all 80 issues of the original US comic published Marvel between 1984 and 1991, as well as the British comic stories that were interwoven with them. It was therefore a very surprising, but appropriate, coincidence that IDW (the current license-holders for Transformers comics) then announced that they would be picking up the original storyline left truncated by the comic's unexpected conclusion in June 1991. 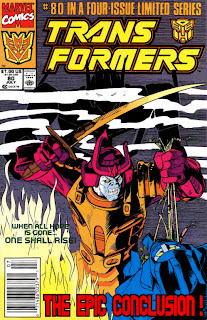 The original creative team - writer Simon Furman and artist Andrew Wildman - are returning and the new comic will pick up storylines left dangling back in 1991. Apparently they are ignoring the Generation 2 sequel mini-series that ran in 1993-94, since they feel it hasn't aged as well as the original comics.

Transformers #81 will be released in 2012. The current plan is for a 19-issue arc taking the comic up to #100 and a grand conclusion to the original story begun way back in 1984. Depending on when the exact dates, that could carry them through to the franchise's 30th anniversary in 2014. Needless to say, old-school Transformers fans who still have all of their old comics in a secure drawer (cough) are very pleased by this news.

Simon Furman on what to expect from the new title:

"It is going to shatter your trousers! Guaranteed!"

Excellent. Though probably not a hint that the first storyline will be called Shattered Trousers.
Posted by Adam Whitehead at 14:08

Very cool. I hope they release the older comics in a new omnibus for new readers to catch up.

I think you can get the original UK and US runs in various different omnibuses at the moment. The Titan Book collections from 2002 or so are the best ones to go for, as the more recent IDW ones have been hampered by not being able to feature Circuit Breaker or other characters crossing over with the Marvel comics continuity, or so I understand.

Heh. I've got issues 1-30 of the UK run at my parents house (hopefully). You could spot the American penned stories because all the noble talk was replaced by phrases like "stick it in neutral Megatron!"

This is awesome. The original series, starting when Furman took over (around issue 51) is legitimately great space opera.

out of the 84 US issues(including Headmasters) you can get about 74 of them in the IDW trades.

IDW is also undertaking reprinting the leftover stuff from really early in the UK run that Titan never got around too..

Other than that, Titan is totally the way to go... but some of them are fairly expensive now due to IDW not reprinting all the issues.

Can't total the cost of supplying the young Adam here with his weekly fill of the comic plus the toys which, had they not been played with, would be worth a small fortune. Hey! Ho! Such are the joys of parenting!