George R.R. Martin has confirmed in an interview with the Chapters Indigo blog that he has signed a deal with Bantam to release a collection of his Dunk and Egg stories. This first volume will collect the first four short stories into one book, but there will be more. 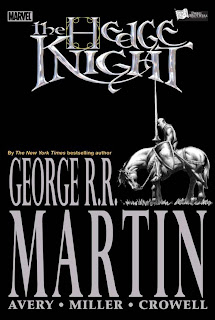 The collection will include The Hedge Knight, The Sworn Sword, The Mystery Knight and the forthcoming fourth story, The She-Wolves (a description of the story, maybe not even a working title at this stage). The fourth story will be published in Dangerous Women, a new anthology due in 2012, so I assume the Dunk and Egg collection will follow in 2013.

The stories follow the adventure of Ser Duncan the Tall, a hedge knight of rude birth, and his very unusual squire, Egg, as they have adventures across the Seven Kingdoms approximately ninety years before the events of A Game of Thrones. Along the way they become embroiled in the doings of kings, princes and rebels, and inadvertently have a major impact on the history of Westeros.

Excellent news. These stories are pretty cool and it'll be great to have them in one volume.
Posted by Adam Whitehead at 18:44

Email ThisBlogThis!Share to TwitterShare to FacebookShare to Pinterest
Labels: a song of ice and fire, george r.r. martin, news, the hedge knight, the mystery knight

Hey Wert, you don't have to 'approve' this comment, just wanted to let you know about the Hedge Knight listed twice instead of Mystery Knight in your article.

Thanks for the info, this is fantastic news!

That's grat news. I'd been waiting for something like this.

A 2013 release would probably put it nicely in between Dance and Winds, too, and make the waiting a bit easier. :)

The Hedge Knight: so good I mentioned it twice :-)

This is good news. I didn't feel like gathering all the anthologies up just so I can read them. All in one place is an instant buy.

This is great news. I've always wanted to see the Dunk and Egg stories collected in the one place. It's a bit of a pain if you want to check them having to find and reach for 3 separate books.

Just spotted Rory McCann popping into a plush hotel in Belfast. The cast must be assembling ahead of the shoot.

Lots of activity at the Paint Hall studios these last few weeks as well.

But best of all I have a brand new, shiny copy of ADWD to while away the hours.

Does anyone know if there's an upcoming graphic novel for the Mystery Knight?

Yup, GRRM said a few weeks back that they were sorting it out now as the one-year exclusive contract thing on THE MYSTERY KNIGHT has just come to an end, so they're trying to get the team together and get a deal (with Marvel, I assume, as they inherited the rights from Dabel Bros).

And not a single comment about Martin once again wasting more time with silly side projects.

As far as I'm concerned, THE HEDGE KNIGHT is the single finest piece of writing in the ASoIaF universe to date, so more Dunk and Egg is fine by me.

IMO there's a couple of reasons no snarky comments are being left. At present everyone is happily reading ADwD, and because the Dunk & Egg stories are set in Westeros they're not regarded as side projects as such. Although if Dance weren't out the time wasting comments would be flowing about this. This gives me something to look forward to during the wait for the 6th book.

In addition, ADWD does rely a little bit on the D&E stories for one backstory revelation, which I think could be mildly confusing for the people who haven't read them.

Which do you mean? Now I am confused...

There's a character heavily referenced in THE SWORN SWORD and who appears in THE MYSTERY KNIGHT whose legacy plays a somewhat important role in A DANCE WITH DRAGONS. He's barely been mentioned in the books (very briefly in CROWS and I don't think most people would remember him from there), so if you haven't read the shorts there is the potential for minor confusion.