The Wheel of Time Art-Off, Part 2

VIII. The Path of Daggers 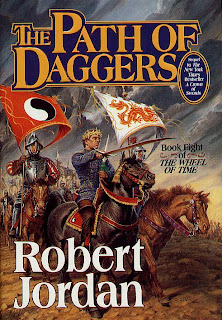 This may be my favourite piece of Sweet art for The Wheel of Time, showing Rand as a commander leading his troops into battle. There's a lot of great detail here, and especially on the back cover which shows the old statue that Rand is left pondering over at one point. A strong image. 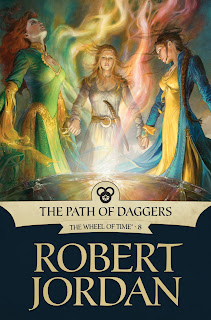 The new cover, by Julie Bell, is quite good in the sense that the figures are fine and the picture is nice and colourful. But, no matter which way you look at it, it still looks like a pop video from the mid-1980s. You can almost hear the power ballad chorus kicking in. 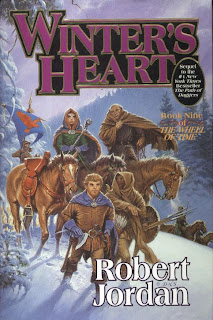 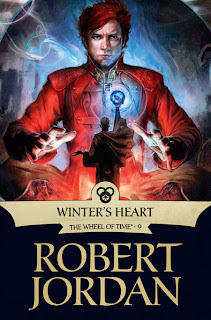 The new cover image, by Scott Fischer, isn't brilliant and without any context looks a bit weird (who's that tiny guy holding a blue ball down front?), but once you realise what it's supposed to be depicting, it's actually reasonable.

Winner: The new cover, though more down to Sweet's weakness than any greatness in the new image. 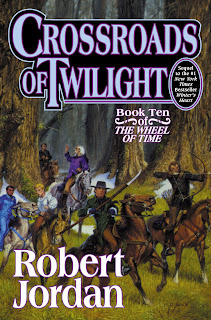 Sweet's cover is yet more people on horses faffing around in the woods. Again a fairly poor image, most notably poor Tuon who looks like a kid in pyjamas. 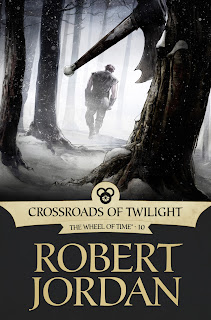 Greg Ruth's artwork is a bit cartoony, but it's a really moody shot depicting Perrin's pivotal decision to choose between the hammer and the axe. Given a paucity of notable moments in the novel to cover, this is a good choice and works well.

Winner: The new cover, by some distance. 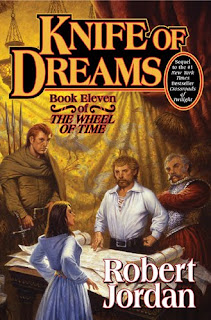 Dwarf-Perrin returns, this time consulting with a woman suffering from muscular spasms. Hmm. 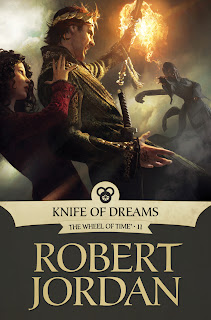 Winner: The new cover. There isn't really any comparison at all. 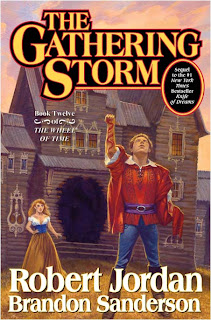 This is easily the worst cover art put on a book from a reputable, big publishers in the 21st Century. It's staggering that Tor actually had the bravery to put a book so hideous on shelves, and even moreso that it got to #1 on the NYT bestseller lists. Staggeringly awful. 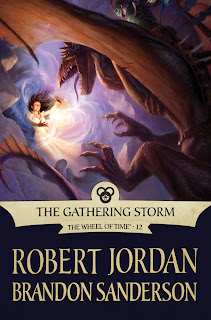 Old-skool fantasy artist Todd Lockwood gives us a strong image depicting the Seanchan assault on the White Tower and Egwene rising to lead the Aes Sedai in their moment of need. A bit old-fashioned, but still impressive. 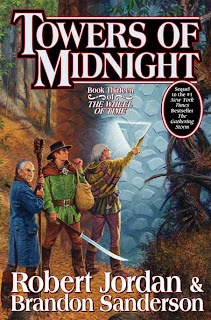 Sweet comes back strong (well, stronger) for his most recent artwork which isn't totally embarrassing. Lacking in dynamism, but there's an element of foreboding as Mat, Thom and Noal set out on a dangerous and long-awaited quest. Unfortunately, the cover image doesn't match the description in the books (of a bare metal tower on a grassy plain with no trees nearby). 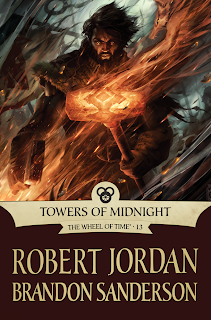 Raymond Swanland's new art is terrific, ferociously moody with a real sense of attitude and destiny coming from Perrin as he forges his new warhammer. A much more foreboding and appropriate image for the penultimate volume of the series. 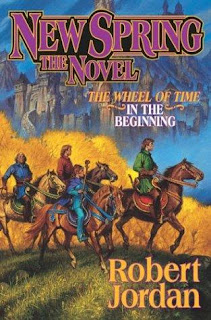 Sweet revisits his Eye of the World composition with a bit of a spin on it, which is an interesting idea but feels a bit derivative. 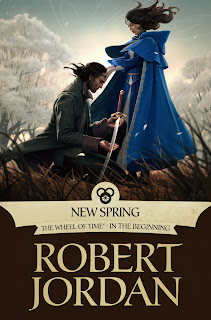 Well, there you go. Sweet put up a stronger struggle than I was expecting, but ultimately the new covers are mostly fresher and more modern. So good job to Tor. However, I'm not sold on their use of borders and cover fonts, which take up a third of the cover image. It'll be interesting to see if they keep that design when they reprint the physical books with new covers some time after A Memory of Light is published.
Posted by Adam Whitehead at 12:47

Did that Crossroads cover actually have any effort put into it? The text and title are clear as, but the image is abysmal quality.

The new covers are pretty damned good, though.

I'm surprised Sweet received any points at all. I could never understand why Rand looked like a slightly (more) freakish Arnold Schwarzenegger with MAHOOSIVE muscles. e.g. Crown of Swords: http://bit.ly/nJdoq2

Julie Bell's Path of Daggers cover looks like something out of X-Men, with Jean Grey and everything. (That could even be Emma Frost and Shadowcat.)

I have to say (without having read the books and only judging by the covers, of course...) that the new covers as a series have a weird design, even if they have much finer cover art. Something about the particularly large mention of the author and the particularly small font for the book title offsets the often much improved cover art of the new editions. In that sense, even the old, super-tacky style looks a little better...

TGS went to #1 on the inner content, not the Sweet cover... That late in the series, almost nobody buying TGS won't have read the series and loved it, so the cover art won't really matter. I'd still read if they were covered in brown paper bags. Or if they had kindergarteners do the covers.

I don't like the new New Spring cover, though. It looks like a photoshopped version of a tacky Fabio romance cover, with hairs and cloaks all blowing in different directions.

Though in case of Sweet I wonder if he had any idea what human anatomy looks like, and his sense of perspective is warbled.

Ah well, it can't always be Kormack or Howe/Lee. And painting programs have probably replaced the good old pens, oils and watercolours for good.

I never got why one of the seminal works of epic fantasy had such crappy cover art. Even the better of the new ones aren't fantastic. I'd much prefer a consistent somewhat abstract design, a la the A Song of Ice and Fire books with A Game of Thrones golden with a lion, A Clash of Kings blue with a crown, etc.

Wert, I have never read any of the Wheel of Time books because of the terrible covers! I know one should go beyond that but the odd look of the characters and the "forced perspectives" did not seem to promise anything memorable inside. I like most all of the new covers. I may have to start reading the series!

That Knife of Dreams cover makes me laugh every time. Perrin as a middle-aged dwarf. It actually took me a few minutes and a process of elimination to figure out it was supposed to be Perrin. I think it may actually be worse than The Gathering Storm (although Rand's bizarrely shrunken forearm is hilarious).

I gave Sweet two out of all the match-ups.

Your Path of Daggers choice is particularly odd, as the Julie Bell cover is very good at depicting something that Sweet never did: women channeling/doing magic.

Of the new covers overall, I'd say The Shadow Rising is my favorite. Not only does it portray my favorite character, it does so almost completely accurately and in a very powerful way.

My least favorite is probably Towers of Midnight, just because it's so good that it annoys the bejesus out of me that it looks nothing like Perrin is described. My friends and I jokingly refer to it as the 'Elyas' cover because he looks so old.

The comparison is of course skewed as we're looking at it with our 'modern' senses of what looks good and what does not. Back in the day when EotW first got released that cover fit right in with what was considered a good cover (style wise). Having said that I'm definitely not a fan of Sweets style, especially with the weird perspective showing people as 'dwarfes'.

I know I'm years to late, but I'll chime in anyway. I'm just happy that some of the new covers acknowledge that the books starred characters other than three men.