In 2003, Harvard student Mark Zuckerberg alienates most of his classmates when he creates a website comparing the attractiveness of girls on campus. However, a trio of other students are impressed by his technical skills and hire him to create a social networking site. When they discover that Zuckerberg has created a rival site based on the same idea, 'The Facebook', they decide to sue him for intellectual theft. At the same time, as Zuckerberg's fame grows and the site becomes more and more popular, he risks alienating the friends who helped build him the site. 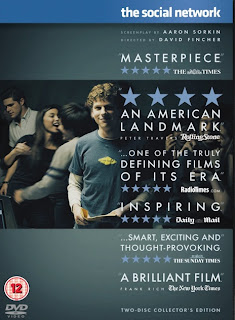 The Social Network is a movie which has a substantial problem: the premise is a very hard sell. The story of Facebook's founding is pretty straightforward: geek hits on winning idea, becomes billionaire, cheeses off a lot of people along the way and gets sued. In order to make a compelling and entertaining movie, the producers decided to bring out the big guns: hire the writer of The West Wing to pen the script, get the director of Fight Club and Se7en to direct, employ the creative force behind Nine Inch Nails to produce the score and finally bring on board a number of the best, promising young American actors of their generation to play the roles. And it more or less works.

David Fincher directs the film like a thriller, using intense close-ups and a steady pace, intercutting between the two court cases in the present and events unfolding on-campus in 2003-04 to give us a clear overview of the situation. He uses some great techniques to make otherwise dull scenes real energy, such as the use of rather bizarre camera techniques whilst the Winklevoss twins row in a boat race to the sound of a crazy cover of Flight of the Bumblebee. He is helped by Sorkin's clever script with its rapid-fire dialogue and cutting insults which may lack realism (were these young people really all that incredibly witty?) but is a lot of fun.

Performances are excellent, particularly Jesse Eisenberg as Zuckerberg, who delivers a controlled, twitchy performance with outbursts of (improbably good) acerbic humour. Armie Hammer plays both of the Winklevoss twins through a combination of CGI and split screen techniques which are flawlessly executed (not being familiar with Hammer's prior work, I genuinely thought they'd hired a pair of twins to play the roles), and his performance is excellent, reaching a height in a scene where the twins confront the president of Harvard and are told to their incredulity that they don't have a leg to stand on as they try to punish Zuckerberg for 'stealing' their idea. Andrew Garfield - the soon-to-be new Peter Parker - is also great as the most sympathetic character in the film, Zuckerberg's best friend Eduardo Severin who is screwed over for no real reason (though note that Severin is the only major player to cooperate with the writing of the book the movie is based on, which may account for this). Justin Timberlake fulfils his early acting potential by playing Sean Parker, the founder of Napster whom Zuckerberg turns to for advice despite Parker's irresponsible reputation, to Severin's disgust.

So, we have a great script, some great actors and a great director. Does this add up to a great movie? Almost. The film is ticking along nicely and is saying some interesting (if somewhat over-familiar) things about fame, avarice and genius when coupled to a strong work ethic but a lack of morality, when it just stops. There's no real climax or a conclusion, the movie suddenly screeches to a halt on a rate trite note: Zuckerberg is told, completely contrary to everything we've seen, that he's not a bad person in an awkward scene that might as well have, "PLEASE DON'T SUE US," flashing at the bottom of the screen. This is one of the risks of making a film based on events that are so recent. The Facebook story is still ongoing, and the film simply catches up with the present day and then runs out of plot. No real conclusions are reached, or are indeed reachable, since we are also told that none of the major participants could take part in the movie due to various legal gagging orders and NDAs, meaning a fair amount of guesswork has to go into the story. There's also some rather interesting deviations from the facts for the sake of drama, such as the fact that Zuckerberg had a steady girlfriend for almost the entire timeframe of the events in the movie, but in the film he is presented as a bachelor who is motivated by a bad break-up.

The Social Network (****) almost succeeds in being a modern dramatic version of Seinfeld: a movie about nothing that succeeds thanks to winning scripts, performances and direction. The tremendous creative forces involved make the film as tense and effective as it can be, but at the end of the day there is the feeling that this is a movie which is based on a thin premise. That they make it into such a compelling movie is a tribute to their skills, but the lack of a climax leaves the film feeling a little incomplete. The movie is available now on DVD (UK, USA) and Blu-Ray (UK, USA).
Posted by Adam Whitehead at 14:55

Email ThisBlogThis!Share to TwitterShare to FacebookShare to Pinterest
Labels: the social network

Pretty much what I thought but I gave it 3.5 - it lost half a point for really not sticking to facts very well. It also lost a whole point for the atrocious colour grading - were you not annoyed by all the orange in this film? The teal & Orange things is happening far to often for my liking.

I would actually argue that it does have a climactic scene: the scene near the end in which Saverin confronts Zuckerberg and Parker at the Facebook offices. The film is about how the Internet isolates one from friendship and emotional connection, so the moment when one of the main characters comes to grips with that seemed an appropriate climax to me.

Also, regarding the above comment, it seems wrong to criticize the film for being inaccurate, since it is a story extrapolated from lopsided source material, not a documentary. The credits don't actually say 'Based on a True Story' or anything like that.

Loved the movie. I agree that the last line about Zuckerberg not being an asshole but trying hard to be felt like a misplaced apology for depicting him throughout as a total asshole. Reznor's score was terrific, and the use of the Beatles's "Baby You're a Rich Man" during the end credits was so on-the-nose. However, that wasn't "Flight of the Bumblebee" during the race. It was Edvard Grieg's "In the Hall of the Mountain King" from the "Peer Gynt" suite.