The Ten Thousand Doors of January by Alix E. Harrow

Kentucky, 1901. January Scaller is a ward of the wealthy and amiable Mr. Locke, for whom her father works as a purveyor of rare artifacts. January longs for adventure, but her mixed race colouring, her gender and Locke's strict belief in order keep her constrained. When she discovers the existence of doors, thresholds that lead elsewhere, and a book that reveals the secrets of the doors, January realises she has a destiny that lies in disorder, to the despair of her guardian. So begins a journey which becomes increasingly dangerous and leads January to remarkable discoveries about her world and her family. 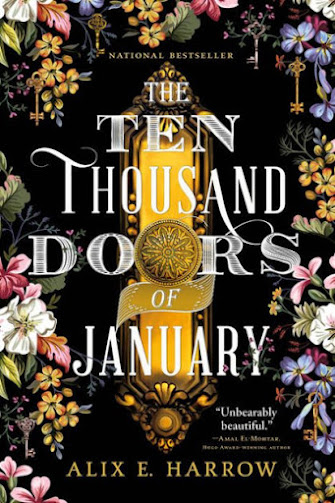 The Ten Thousand Doors of January is Alix E. Harrow's debut novel, following a string of successful short stories (including the Hugo-winning A Witch's Guide to Escape). The book is sits comfortably in the "portal fantasy" genre, a well-trodden field wherein sits everything from The Chronicles of Narnia and The Chronicles of Thomas Covenant to Guy Gavriel Kay's Fionavar Tapestry series. However, whilst most portal fantasies are about the mysterious new world the protagonists find beyond the portal, The Ten Thousand Doors is about the process of finding the doors and ensuring their survival. Very much a case of the journey being more interesting than the destination.

The book also extends this approach to the lead character of January Scaller, whose oft-absent father and entirely missing mother leaves her feeling incomplete and unrealised. As the book progresses, the portals become vehicles for her journey of self-discovery; she gains a greater understanding of her past and her family as she crosses the portals.

It's a fine approach, further helped by the narrative unfolding in two strands. The first strand is a first-person adventure narrated by January herself, unfolding over many years as she grows up and tries to learn more about her deceased mother and her often-absent father. The second is the book-within-a-book that January is reading, about a young girl growing up decades earlier who finds a way of travelling between worlds, a power that January realises that she also shares and is something that other people want to control...or destroy.

The two narratives reflect on one another as they unfold in tandem, each informing on the other. Credibility is a slight issue here - January seems to be obsessed with the book, but only reads the next chapter when it's dramatically convenient to the advancement of the plot, rather than say blasting through the whole thing in a few hours like any sane reader - but this feels like a pedantic complaint about what is essentially a fairy tale for adults.

There are other complaints - there are moments of Dickensian misery that occasionally insert themselves in a near-non sequitur manner, such as a slightly out-of-place episode taking place in a lunatic asylum - but these are constrained. After a slow start, The Ten Thousand Doors of January unfolds through splendid prose and elevates itself from a simple adventure to a meditation on the power of words, the art of storytelling and the reaffirmation of that old Tolkien idea of every journey of a thousand miles starting with a door, and wondering what's beyond it.

The Ten Thousand Doors of January (****) is an intriguing book, mashing up traditional portal fantasy with the parallel universe strand of science fiction and using both as a vehicle to muse on story, identity and family. It's a book that does little that's new, but instead remixes a lot of existing ideas to create a compelling narrative. It is available now in the UK and USA.

Wert, you're the best!