This year marks the 25th anniversary of the SF franchise that first got me into the genre as a young 'un. Yes, it's all his fault: 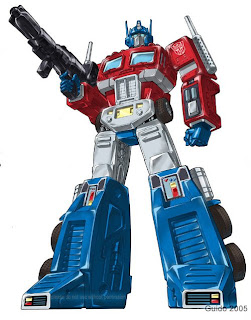 "Go on, kill me. I'll just come back as a more badass and expensive toy. Capitalism is indeed the right of all sentient beings."
Of course, it's a bit difficult to know when the exact anniversary is, although 'September 1984' is usually thrown out there as a rough date. The first episode of the cartoon series debuted on 17 September 1984, but, adding to the confusion, a lot of sellers put the toys on sale before their official street dates (which themselves are difficult to find today) and some were on sale a month or two before then. However, thankfully for the purposes of sanity, the first issue of the Transformers Marvel comics run, although dated September 1984, was actually published on 29 May that year, so that becomes the anniversary date. There will be coverage on The Wertzone, so be forewarned.

Anyway, over on Speculative Horizons James has a bit of a rant at the live-action iteration of the franchise, as directed by Michael 'Gigaexplosion' Bay, which I will pick up on after I've rewatched the film. I have seen it, but all I can remember about it are gigantic explosions and Megan Fox. The sequel is out this summer and, from the trailer, will apparently contain more gigantic explosions and more Megan Fox, so at least it appears to be thematically consistent with its predecessor.
Posted by Adam Whitehead at 20:15

I wasn't big into Transformers when I was a kid. I think I may have missed it by a few years. I certainly remember the cartoon and the toys and even the animated movie but it just didn't capture me the way other things did back then. That being said, I enjoyed Bay's movie for what it was but even I could tell they missed an opportunity for a much bigger story.

Yeah, the Transformers were a cool show on when I was younger. The films were predictable and the story and characters were lacking, but what should we expect with Michael bay right? I do have to say that I appreciated the effects, the metallic look and movement of the creatures, beyond that I wasn't all that intrigued. Shia LeBouf is a rising actor though, he's got some talent. So for T2 this summer...I'll probably have to opt out until video despite the 25th anniversary!

I LOVE the original cartoon and the movie they made of it - Orson Welles as Unicron? Yes please! Also that film has one of the best soundtracks in cinematic history - You got the touch!

The new movies? Watchable but they just don't have that awesomeness factor that the original cartoon had although I am really looking forward to seeing Devastator in action.

Michael Bay doesn't direct movies, he directs explosive action scenes and gets the camera to sweep throughout the entire film and wraps some kind of story around it to tie in all the big bangs. Sometimes it works, sometimes it doesn't.