Typical that just after my first-ever Transformers post, the second one would have to be a piece of sad news. The slice of Transformers I grew up on was the Marvel comic, which ran for a stonking 332 issues between 1984 and 1992 and contained a tremendous amount of awesome.

The very first Transformers artist was Frank Springer, who sadly passed away from prostate cancer on 2 April at the age of 79. In addition to Transformers he worked on many other Marvel and independent comics, including Nick Fury, Agent of SHIELD and The Avengers. He also worked for National Lampoon. He served in the Korean War and had been active in comics work since the late 1950s. In addition to his work on Transformers he also did the art for the Headmasters spin-off mini-series, which gives rise to what David Willis of the Shortpacked! webcomic makes a convincing case to be the greatest piece of TF-related artwork ever, when taken out of context: 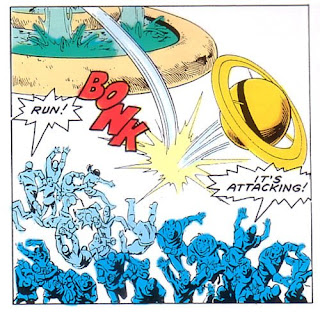 Seriously, the real explanation is nowhere near as awesome as what is going through your mind right now.
Sad news indeed.
Posted by Adam Whitehead at 18:57