The Somerset town of Wincanton was officially 'twinned' with the Discworld city of Ankh-Morpork in 2002. The town's ties with the fictional city were strengthened when a new housing estate, Kingwell Rise, had several streets named after streets in Ankh-Morpork. Peach Pie Street and Treacle Mine Road are among the new street names unveiled by Sir Terry Pratchett himself.

No word on if Wincanton is to get an Unseen University soon, however. 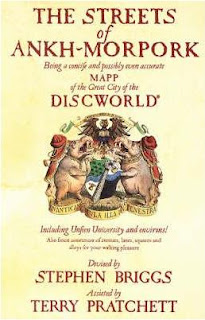 I'd love to live on Treacle Mine Road.

Reminds me of a Dutch city (Geldrop) which has a whole neighbourhood dedicated to Tolkien. Man I would love to live at '5 Fangorn' or '31 Lothlorien'. :)