Wertzone Classics: Use of Weapons by Iain M. Banks

Cheradenine Zakalwe is a (non-Culture-born) agent in Special Circumstances, skilled in steering less-developed planets towards the path that the Culture thinks is best for them. Unlike most SC agents, Zakalwe's speciality is fighting and the use of weapons in both prosecuting wars, and averting conflicts. His handler is SC agent Diziet Sma who, along with her drone companion Skaffen-Amtiskaw, has to set out to locate Zakalwe when his abilities are needed again. 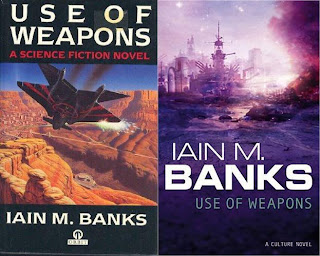 I've read enough of Iain Banks' other work to be able to say that Use of Weapons is almost certainly his masterpiece, which is really saying something compared to the high quality of his other novels. In this book everything just works. The characters are sublimely handled, with Banks immersing you in their lives to the point where you stop thinking of them as characters and instead accept them as people. The structure of the story is inventive without over-relishing its own cleverness. The chapters alternate between a forward-moving story about Diziet tracking down Zakalwe for a new mission, and how that mission unfolds, and a backwards-moving one as we follow Zakalwe's story back to his youth. Just to shake things up, both narratives also feature flashbacks to earlier events as well. The structure could have confusingly imploded in on itself (and earlier drafts stretching back fifteen years before it was published are apparently far more complex), but in the published book it works effortlessly. The storylines may be moving in different directions and feel dislocated from one another, but they collide with impressive force at the end of the novel in a stunning final chapter.

Banks' signature creation, the Culture, has never been so convincingly portrayed or as well-handled as in this book, and its total bafflement at Zakalwe's antics (personified by Skaffen-Amtiskaw's exasperation with events) is amusing to see. In fact, there's a lot of Banks' traditional black humour running through the book, lightening the gloom that threatens to descend during some of Zakalwe's more introspective moments. 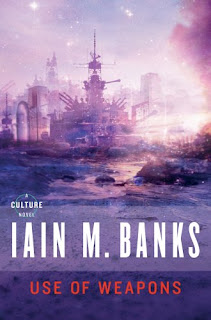 Use of Weapons (*****) is a spectacularly good science fiction novel that addresses questions of memory, motivation, guilt and conscience in a consistently entertaining and sometimes very funny manner. A masterful novel from a writer at the very height of his powers, and highly recommended. The novel is available now from Orbit in the UK and USA.
Posted by Adam Whitehead at 14:24

Email ThisBlogThis!Share to TwitterShare to FacebookShare to Pinterest
Labels: iain m. banks, the culture, use of weapons, wertzone classics

this is one of the books that had be reduced to tears when I read it. It's such a punch in the stomach.

still my all time standalone sf novel after almost 20 years from first read and countless rereads :)

"everything works" is a good summary

Iain M. Banks' masterpiece is a sure recommendation but "questions of memory, motivation, guilt and conscience" sound rather like omnipresent topics (like in about 80% of Victorian literature).

Is this one stand-alone or should one read more culture novels first?

Thanks in advance. I've been looking everywhere to try to figure this out.

This was the first Banks novel I read. Superb and somewhat shocking ending.