The Forest of Hands and Teeth by Carrie Ryan

The village sits alone in the forest. Ringed by ancient fences and barricades that stand between the people of the village and the Unconsecrated, it is a haven of civilisation against the horrors that lurk in the Forest of Hands and Teeth. The Guardians defend the village and the Sisterhood leads it, ensuring the people pray for salvation and do not question the order of things. When Mary's mother is taken by the Unconsecrated and Returns as a mindless beast, she stops believing in God and her questioning of the facts of her life leads her to some shocking discoveries about her world and her place in it. 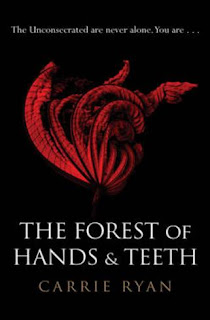 The Forest of Hands and Teeth is the debut novel by American author Carrie Ryan and is the first in a series set in a post-zombie-apocalypse world. The small community ringed by danger recalls the works of George Romero, whilst the forbidding forest surrounding the small, seemingly idyllic commune brings to mind the movie The Village (in a good way). The way people try to carry on with ordinary lives but having to take precautions against the threats of the world is also reminiscent of Peter Brett's recent The Painted Man as well (except, obviously, with zombies rather than demons). The book also has a feel of its own as well, due to the role that religion plays in affairs and the obsession of the main character in finding the truth about the world.

The book is told in the first person from the point-of-view of teenager Mary, who faces entering adulthood and searching for a prospective husband at the same time her family is laid low by tragedy. Mary is a deeply flawed protagonist, angry at the world and by turns obsessed with finding 'the ocean' (a strange concept her mother told her about as a child) and also with a young man, Travis, who is betrothed to another. In short, Mary is a very convincing teenager whose stubbornness and jealousy sometimes gets her and her friends into trouble. This makes her often an unlikable character, such as when she withholds important information from her friends for no really comprehensible reason, but also a very convincing one. 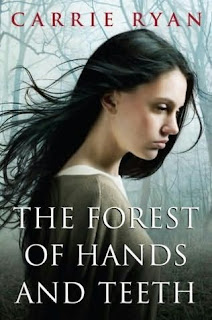 The setting of the first book is intriguing, with a creepy and mysterious atmosphere pervading the besieged village and its enigmatic cathedral. Characterisation is solid, and most importantly the writer can write, with a flowing and engaging prose style that keeps the action moving along nicely. However, there is definitely too much emphasis on the doomed romance storyline, which is appropriate in the first half of the book but under the much more desperate and dangerous circumstances of the second begins to get a little grating and occasionally threatens to bog down the pace, although usually the author seems to realise this and gets the action underway again with a nicely-written moment of horror or an interesting backstory revelation.

The ending is mildly disappointing, partially for being a little bit too familiar from readers of The Zombie Survival Guide and World War Z, and also for its extreme ambiguity. There will be a companion novel focusing on other characters, The Dead-Tossed Waves, out next year, with further books promised, so I'm guessing we'll eventually learn the fates of the characters left hanging at the end of this book, but a little bit more solid closure would have been appreciated.

The Forest of Hands and Teeth (***½) is a debut novel beset by some of the normal teething problems associated with a debut work, but Carrie Ryan's prose and pacing skills are impressive. I'm looking forward to seeing what she can do with more experience. In the meantime, this is an enjoyable book that will pass the time nicely. The novel will be published by Gollancz in the UK on 1 July 2009 and is available now in the USA from Delacorte.

Oh yeah, and to those worried by this being a 'YA' novel, it isn't. It's instead a book that doesn't feature any sex or swearing, which seems to automatically make a book 'YA' these days even when it features some gruesome imagery and violent deaths (as this book does).
Posted by Adam Whitehead at 23:42

Email ThisBlogThis!Share to TwitterShare to FacebookShare to Pinterest
Labels: carrie ryan, the forest of hands and teeth

Looked into this one and could be a buy.