Given that the first half of Heroes' third season was almost unwatchably bad, it is unsurprising that many fans have given upon the show and its ratings are in decline in the USA. However, before the second half of the season debuted it looked like there was still hope the show could be redeemed. Writer-producer Bryan Fueller, credited with being behind the energy and enthusiasm of the first season, returned after a long absence and some new blood was added to the show, such as BSG's Mark Verheiden. The producers most responsible for the nonsensical plot twists the series had taken in Season 2 and the first half of Season 3 were both summarily fired. So, was this emergency surgery enough to save the show? 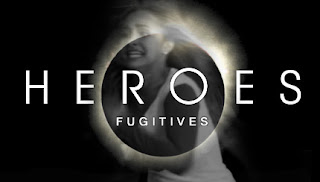 Events pick up after the end of the previous volume, 'Villains', with Nathan Petrelli now convinced that people with abilities are dangerous and need to be controlled. He recruits Noah Bennett to his cause and is assigned a tough enforcer, Danko, to carry out the mission. A new government organisation is set up to control the heroes and in the first episode these agents strike, taking the heroes prisoner and packing them on a flight to take them to an institution where they can be studied. Thanks to Claire and Peter's machinations, the plane crashes and our heroes are now on the run from the government.

The first few episodes of 'Fugitives' are unexpectedly good. Peter and Hiro's powers have been radically weakened so they are no longer show-breakers and the battle of nerves and wits in the agency's HQ between Danko, Bennett and Nathan is well-played. Tracey gets a lot more to do than she did last half-season and Ali Larter excels in the role, turning Tracey into an angry, driven woman who no longer fears her powers. Sylar also gets a sidekick, which is quite amusing, though ultimately the plot goes nowhere. Some former characters the show seemed to have forgotten about also return unexpectedly in new and logical roles. There seems to be a bit more thought going on than there was previously.

This culminates in the episode Cold Snap, written by Fueller, which sees Tracey's story reach its climax, the unmasking of the mysterious 'Rebel' and the culmination of another story thread between Matt Parkman and Daphne. These story elements are handled very well with a deft touch and the result is the best episode the series has done since the end of Season 1. It really fills the viewer with hope that the series, at long last, is starting to get back on track.

These hopes are immediately dashed as the plotting towards the end of the series becomes incoherent. Sylar's character is destroyed by atrocious writing and completely unbelievable character turns. The attempts made to make Danko sympathetic are utterly pathetic. The Season 3 finale is the most contrived, nonsensical and borderline-insane 44 minutes of television I have seen in a long time. It reads like particularly moronic Heroes fan fiction and the script should have been burned and the writers responsible for it fired immediately. The fact that they went ahead and produced it boggles the mind.

To some extent, these problems are still not fatal. Fueller's return to the show was very late in the day and the ending of the season was locked and scripted to the point where there was little he could do to save the finale. For Season 4, which commences with the volume 'Redemption', there needs to be a major cull of the weaker writers on the show, a lot of fresh blood needs to come on board, the remaining baggage from earlier in the show (particularly Sylar, who serves no useful purpose any more) needs to be swept away, they need to stop wimping out on showing us the major fights and, generally, the show needs a total revamp. If they can pull that off, a good show can still be dragged from the wreckage of the last two seasons. Given the falling ratings and increasing critical scorn, they're very lucky to have a fourth season at all, but it will be the last unless they can turn things around very quickly.

Heroes: Fugitives (**½) is the strongest 'volume' of the show since the first one, but this isn't saying much. Of the dozen episodes here, there are about four which are really good and a few others that aren't offensive. But the show is still nowhere near the form of its first season and is clearly on its last legs if things do not decisively change for the better.
Posted by Adam Whitehead at 14:01

that was finale was insultingly bad. We didn't get any cool battles between heroes all season (series, as you say) and when one finally arrives it occurs off screen. And not just off screen but a door literally gets slammed in our face so we can't see whats going on right behind. Thats such bullshit.
I stuck with the show this season, hoping that it would get better, but I'm done now.

I stopped watching after the appalling end to season 1 and the God-awful start to season 2.

I watched season 1 & 2 religiously. But at the start of season 3, it just didn't keep my interest anymore and I stopped watching. But my hubby is still watching it, hangin' in there. He is hoping the next season might be better.

I still enjoy the series, it is interesting and keeps you addictive to the TV screen.