Happy 10th Anniversary to the Malazan Book of the Fallen!

On a lighter note, it is now ten years since Gardens of the Moon, the first novel in Steven Erikson's Malazan Book of the Fallen series, was published. Preceded by tremendous reviews (JV Jones' review in SFX and the Stephen Donaldson cover-quote were probably instrumental in the book being as successful as it was), the book led to no less than nine sequels (seven of which have already been published) and Erikson becoming one of the most-discussed epic fantasy authors of modern times. 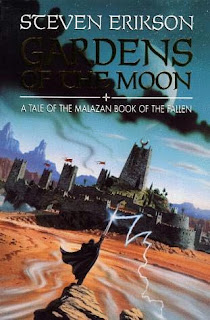 Ten years? You've got to be fricking kidding me! Also, what the hell is actually going on in that picture? Can someone at Bantam please tell us please?
More impressive is the fact that in ten years Erikson has published eight very large novels with the ninth due in just a few months and the final book in the series only a year and a half away. Whilst the merits of the Malazan series continues to be fiercely debated on many fantasy forums, no-one can deny that Erikson's profligacy is impressive. Anyway, here's to the next ten years!
Posted by Adam Whitehead at 23:57

Email ThisBlogThis!Share to TwitterShare to FacebookShare to Pinterest
Labels: gardens of the moon, steven erikson, the malazan book of the fallen

I just picked up Gardens of the Moon, and looking forward to diving into it! Looks like I have ten big books ahead of me! : )

Best series in ages. I'm collecting the Sub Press editions I like it s much.

Erikson is a genius and Esslemont ain't far behind.