The Born Queen by Greg Keyes

The fourth and final volume in the Kingdoms of Thorn and Bone series opens with war about to consume the kingdom of Crotheny. Anne has taken the throne of the kingdom, but has been declared a heretic and a witch by the Church, who have amassed an army to the south whilst their ally, the King of Hansa, mounts an assault from the north. Meanwhile, the death of the Briar King and the rise of the prophesied Blood Knight both seem to portend a time of great suffering, and Stephen, Neil, Aspar and Cazio face different struggles in different parts of the land to ensure the survival of the kingdom and the world itself. 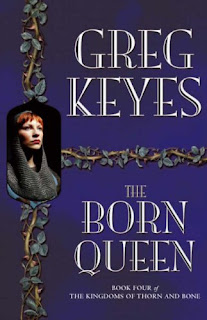 Right from the off, something feels 'wrong' with The Born Queen. Despite having read the first three books in short order six months ago, I found it very hard to get into this book initially. Characters seemed to have suddenly changed or moved a long way from where they had been at the end of the third book, and were behaving inconsistently with their prior selves (particularly Anne, although that at least is partially deliberate). The plot suddenly felt a lot more mechanical. In the first three books the characters had good reasons for doing what they were doing, but in this final book the characters feel like chess pieces being moved around merely at the author's whim. People do things because visions tell them to, or because they are under a curse, or because certain characters can suddenly see into the future with pinpoint accuracy. Tonally, the book feels a mismatch with the first three, with the more Song of Ice and Fire-like realism of the earlier books suddenly lost in favour of dark twists more akin to those of The Prince of Nothing trilogy or vision and prophecy-based storylines that feel more akin to Dune. Unfortunately, Keyes is a lot less adept at these forms of storytelling.

In short, The Born Queen really feels like a book the author had to write rather than one they wanted to write. Character arcs are truncated and dealt with perfunctorily at best. The end-points for many of the characters are highly dissatisfying. The grand finale is a complete failure, with the story fizzling out without any real sense of menace or tension. We go from the build-up to the final confrontation to the "Where are they now?" epilogue in the space of two or three pages. Major characters' motivations (particularly Hespero and Fend) are left as a confused mess. 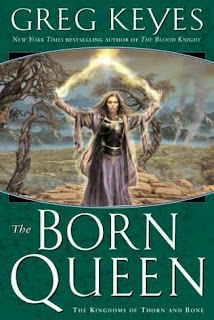 The book isn't a total waste of time. Cazio is still written superbly and his storyline can still be fun (everywhere else the good humour and sense of fun that permeated the early books has vanished without trace, leaving the other storylines as a grim slog), and the events of the book are a reasonable conclusion to the story, but the actual depiction of them is severely mishandled.

The Born Queen (**) is a startlingly disappointing and weak conclusion to what had been a very solid series. The book is available now in the UK from Tor in the USA from Del Rey.
Posted by Adam Whitehead at 16:16

Email ThisBlogThis!Share to TwitterShare to FacebookShare to Pinterest
Labels: greg keyes, the born queen, the kingdoms of thorn and bone

No, no, NO! I just recently read the first three and have been waiting for this in paperback. After a struggle to get into the first book I soon was enthralled and couldn't put them down. Oh Lordy I hope I like this last one better than you although I trust your reviews which I mostly agree with so I'm now almost pre-disappointed in it. Doh!

That sounds as if the author was told to finish the story in One. More. Book where two might have worked better.

The whole series is on my shelf.
I read several good reviews of the first three books. It is sad to read when a series doesn't get the end it deserves.
Anyway I want to read the series but I will read the last book with less expectations.