The Shadow of the Scorpion by Neal Asher

Although I'd heard a lot about Neal Asher in the past, I hadn't picked up any of his books until encountering the author himself at a signing in my home town of Colchester. I picked up Gridlinked, his first novel and also the first in his Agent Cormac series, but hadn't gotten round to reading it before I was sent an ARC of his latest novel, Shadow of the Scorpion. Since Shadow of the Scorpion is a prequel to the other Cormac books, it seemed like a decent place to start. 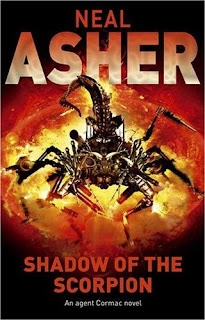 The setting is many centuries hence, and Earth and its colonies are controlled by the Polity, an AI-controlled political entity. Humanity's attempts to rule itself have not worked out so well, so now control of human affairs has been (partially) ceded to the AIs, with humanity and AI constructs such as drones, androids and 'golems' (robots cloaked in human flesh who are almost impossible to tell from the real thing) working alongside one another in peace.

The Polity is put on the back foot when it encounters a hostile race known as the Prador, and is soon fighting a desperate war for its very survival. The novel follows two separate timelines. In the former, we follow the family crises afflicting ten-year-old Ian Cormac, whose father is fighting on the front lines and whose brother is serving in the medical corps. In the latter, we pick up Cormac's story ten years later as a fresh recruit helping mop up various worlds following the Polity's (costly) victory. The novel flips between the two regularly and the relationship between events in Cormac's childhood and during the events that first attract the notice of the Polity's ECS (Earth Central Security) agency.

The Shadow of the Scorpion is a very solid SF novel with a strong action storyline, but which at heart is more concerned with what drives and motivates Ian Cormac and what he does. Cormac is an interesting character whose family life is very-well defined (and a refreshing change from some other recent SF heroes/antiheroes like Takeshi Kovacs, who are usually loners at heart). There's also a mystery element, as the young Cormac keeps coming across a scorpion-like war drone which seems to be following him around for an unknown reason. As the novel draws to a close, these narrative strands are tied together nicely (but not in too contrived a manner). 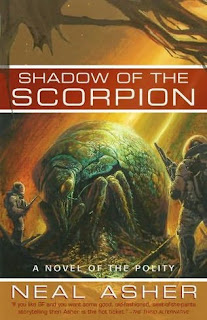 Asher's grasp of character is strong, but he also has the needed SF credentials with some great ideas for weapons, spaceships and a good handle on AI characters as well: the Polity could perhaps be called a more primitive version of Banks' Culture in this regard, although that would be doing a disservice to Asher's capacity for invention.

There is a slightly 'bitty' start with the flashbacks to Cormac's childhood not providing a smooth introduction to the story, but once you leap over that hurdle the story progresses much more satisfyingly. As a prequel, it possibly works better if you're already familiar with the Polity universe and its concepts, although I didn't find it too hard to get on board (I had to look up what a 'runcible' was, though).

The Shadow of the Scorpion (****) is available now in the UK from Tor UK and in the USA from Night Shade Books.
Posted by Adam Whitehead at 21:19

Email ThisBlogThis!Share to TwitterShare to FacebookShare to Pinterest
Labels: agent cormac, neal asher, the shadow of the scorpion

I thought this book was by far the weakest of Asher's, and not a very good indication of what his main series is like (which really grows in scope after a more contained start with Gridlinked).

I had looked forward to this book for what seemed like forever (it was so late in printing)...finally, bought it, tried to read it, and actually returned it to the bookstore it was so disappointing.

Just finished it too though I had it for a while since Night Shade released it.

I read all of Mr. Asher's novels (10 Polity incl this one + Cowl) and most of his short fiction and I sort of agree that Shadow of the Scorpion is both the weakest of all as a novel, but a decent introduction to the Cormac main series (5 novels + several ss)just finalized on a high note last year in Line War.

Shadow reads more like an extended novella and there is nothing essentially surprising in it, but it gives a good flavor of the mainline novels which are on a much grander scale.

Hmm, maybe I should try the Line War then. Though I don't think it's available in the U.S.!!

Line War does not make sense as a standalone. The main Cormac Polity novels have an odd structure, debut Gridlinked is almost a standalone - ie some big picture mysteries remain but a satisfying and complete ending, then 2 big volumes each split in two, so Line of Polity is first half with Brass Man its completion, and again we arrive at a good ending, and then Polity Agent is the first half with Line war its completion and now we are sort of done with Cormac.

We jump several hundred years in the future for Skinner/Voyage Sable Keech with a prequel in Prador Moon, and then we jump maybe another 4-500 years for Hilddigers which is another standalone outside the Polity, with the main POV the Polity "ambassador".

The new novel Orbus seems to take place after Voyage Sable Keech and bring together some Cormac-line characters with the ones in the Spatterjay sequence (Skinner...)

After that it seems Mr. Asher will start exploring his "Owner" milieu of various ss, most recently in Galactic Empires