One hundred and fifteen years after the resettlement of Hiigara, the former Exiles have built up a technologically-advanced civilisation spanning much of the Inner Rim of their galaxy. But a new threat has arisen. The warrior-clans of the Vaygr have unified under a warlord named Makaan and vowed to unite the three great hyperspace cores that will awaken Sajuuk, a legendary figure in galactic mythology, and harness his power for their own. To combat this threat, the Hiigarans have built a new flagship, the Pride of Hiigara, and transferred their core from the old Mothership to it. But, before the Pride can be launched, the Vaygr launch a pre-emptive assault, destroying the Pride's construction facilities and besieging Hiigara. With the homeworld only days from falling, the Pride and its fleet must unite the three cores and awaken Sajuuk to defeat the Vaygr before Makaan can do the same. 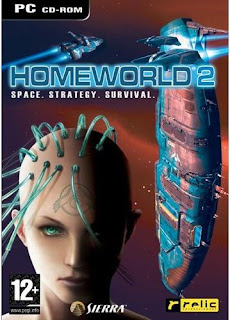 Homeworld 2 was released in 2003, four years after the first game in the series and three after the well-received stand-alone expansion, Cataclysm. The reason for the lengthy delay was due to Relic pursuing an original project, Impossible Creatures, with Microsoft and returning to the Homeworld series somewhat belatedly. The publishers, Vivendi, were clearly unimpressed and there was very little publicity for the game. It is also likely that any planned sequel or expansion was shelved even before the game was completed, since Homeworld 2's end sequence seems to rather hurriedly describe another sequence of complicated events that sound like they really should be game missions.

Homeworld 2 is something of an evolution and expansion of the original game. Principally, the game is played more or less in the same manner as before. You build up a fleet of ships from your mothership and its attending carriers (the sequel adds mobile shipyards as well, where you can build the biggest vessels in the game) and take the fight to the enemy. Each mission has a different objective, whether it's blowing up an enemy ship, recovering a vital artefact, or holding off an enemy force until you can escape. The game's intricate and mythology-heavy storyline is relayed through Relic's trademark black and white animated cut scenes, which remains a highly effective and atmospheric method of getting across information efficiently. There's also a lot of in-game cinematics which depict the changing circumstances of this new war.

Homeworld 2 is different to its forebear in that it's based around more mythological ideas than the first game. Indeed, with its prophecies, chosen ones and heroes prophesied to return from the dead, it feels like it's more of a fantasy story than hard science fiction. The number of macguffins in the story, from oracles to keepers to super-dreadnoughts, is a bit cheesy but the stakes are high and the drama is played out intensely. Unfortunately, the game's reliance on its storyline interferes with the strategic aspects of the game. Often missions are lost because a mission-specific event has an enemy fleet jumping in on top of your mothership whilst your fleet is attacking an enemy base on the far side of the map (your mothership can move this time, albeit incredibly slowly), leading to the annoying situation where some missions can only be completed after you've attempted them three or four times and can get your fleet in position to jump enemy forces when they arrive. For a strategy game, this can be rather annoying.

On the plus side, there are many innovations. Ships now have sub-systems that can be upgraded and improved (not just your mothership as in Cataclysm but your battlecruisers, shipyards and carriers as well), and the game is more strategic than before. Bombers, fighters and corvettes are necessary right through the game (in the first two you could stop bothering with them about halfway through and it didn't really matter) and you can now combine your capital ships and fighter wings into massive strike groups. When you order these groups to engage enemy fleets, the ships in the group will automatically select the best targets for them to deal with. So flak frigates will target enemy fighters, ion frigates and bombers will go after enemy capital ships and so on. The AI used in this is excellent and remains impressive six years on, although it's a little too good. A strike group maxed out with ships will annihilate entire enemy fleets with no need for you to issue any more orders which is impressive but does reduce the player to a bit of a spectator at times. But when the game looks this good (and the graphics are still gorgeous today) that's not too much of a hardship. Sound is also exceptional, with the music possibly being the best out of all three games and given the quality of the first two games' music, this is quite remarkable.

The game suffers from one, massive flaw that is a dealbreaker for many players. The game scales its difficulty based on the size of your fleet, so the enemy is always given between two and four times as many ships as you have at the start of each level. This is an artificial and unconvincing way of providing a challenge and makes it feel like the game is being deliberately unfair to the player. In addition, the difficulty curve is insane. The third and fourth missions in the game are, ludicrously, the toughest (mission four in particular is ridiculously hard and it's possible to break it by sending a probe to check on the enemy base - a fairly standard tactic - as this means several cut scenes won't trigger and you can't finish the mission or the game). Once you get past them, the game eases off a bit and it's possible to finish the rest of the game in a few hours.

Homeworld 2 (****) is a fine addition to and expansion of the series, even though the somewhat cheesier story, the scaling flaws and difficulty curve all mean it's not as satisfying as the first two games in the sequence. It's well-produced, still looks great and offers some interesting tactical and strategic advances, but it lacks some of the character and charm of its predecessors. Still, the Homeworld universe is a fascinating place, and we are long overdue a return visit. In 2007 THQ, Relic's current owners, bought the Homeworld licence from Vivendi and it is now widely believed there will be a Homeworld 3 some day (there are some comments at the end of this interview here with Relic that suggest this could be on the horizon). The game is available now on budget in the UK (PC, Mac) and USA (PC, Mac).

Homeworld 2 has seen some excellent mods produced for it over the years, most notably the Battlestar Galactica mod Fleet Commander, which allows you to command Colonial battlestars or Cylon baseships in combat, or the Homeworld 2 Complex series which turns it into a massive, multi-hour strategic online challenge. The game's excellent mod scene ensures there's a lot of free content out there that can make the game last a lot longer than its otherwise modest length would ensure.
Posted by Adam Whitehead at 20:00

Played the first one. Didn't even know the franchise was still alive. Guess I was wrong.