Continuing our recent computer game theme, there have been some recent developments on the Fallout gaming front that will be of interest to fans of that game. 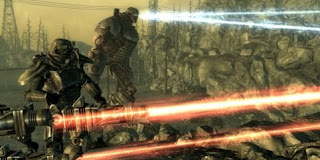 Even 200 years after the nuclear apocalypse, electricity pylons are still standing. That's some badass engineering.
First off, the last of Fallout 3's downloadable mini-expansions, Broken Steel, is released on 5 May. Broken Steel, unlike the others, follows directly on from the end of the original game (which it partially changes) and will see your character tying up some loose ends from that title. Your character can also now increase his experience to Level 30, and there are new NPCs to team up with, new enemies to kill and new weapons and perks to acquire. As well as a new storyline following the battle between the Brotherhood of Steel and the Enclave, there are some new side-quests as well. Broken Steel is the largest of the three DLC expansions and already looks like being the best. More here.

Secondly, in a surprising and most welcome move, Bethesda have announced that Obsidian Entertainment will be developing Fallout: New Vegas, a stand-alone spin-off that will launch on PC, X-Box 360 and PlayStation 3 in 2010. Reading between the lines, it sounds likely that New Vegas will use an enhanced version of the FO3 engine and will be a self-contained RPG set in the same universe, likely in Nevada. This news is welcome and appropriate because Obsidian are, effectively, the successor company to Black Isle, who created the original Fallout and Fallout 2 in 1996-97, and several people working on the game worked on the original games as well as titles such as the immortal Planescape: Torment and Knights of the Old Republic II. Obsidian are also among the most respected creators of RPGs out there, alongside their occasional partners BioWare, and are notable for their excellent handling of dialogue and characterisation, areas which some reviewers (cough) feel Bethesda could do a bit more work.

In less happy news, Bethesda have terminated their business contract with Interplay which would have allowed the latter to develop a Fallout Online game. According to Bethesda, Interplay failed to meet the terms of their agreement, something Interplay are disputing. Oh well.
Posted by Adam Whitehead at 03:16

I love the Fallout series, and I also love Fallout 3, though I still somehow prefer the more tactical AP combat of Fallout 2 and the perspective. VATS is nice, but still not the real thing.

But while I can really recommend Fallout 3 despite some minor dislikes, the DLC are just outrageous.

Anchorage was a bad shooter - nothing more. And very very short - 2-3 hours of the most linear and boring gameplay ever, but it still cost quite some money. All what was left was a one-shot-killer gun and a fancy armor. The only reason to get this DLC - not much for the money!

The Pitt was significantly better, better story, more atmosphere, choices had at least some influence on the storyline. But it again cost quite some money, and I thought I could as well have travelled the Wasteland in search for side quests and random encounters and would have had more fun for less money.

This said, I am looking forward to Broken Steel. The ability to continue the game instead of dying in the final quest has some merit. Even if it means that the poor Brotherhood Paladin lady will have to make the ultimate sacrifice. :)

I'm hoping they change it so Fawkes can do it, as he/she is immune to radiation ;-) Or the game lets you do it but you just take some radaway and rad-x before going into the chamber.

Oh man, I cannot wait for both of these! Fallout 3 has been the most engrossing game I have played for a long time. When I first picked it up I lost many, many...MANY hours! I'll definitely be picking up the new expansion and the new game.