A few months after the events of Storm Front, wizard Harry Dresden is going through some lean times. Following the events of the prior novel, his stock with the Chicago PD is at a low and word has gotten out that Dresden may be in cahoots with the city's foremost gangster. However, an outbreak of savage killings every full moon sees the police reluctantly enlist Dresden's aid once again. 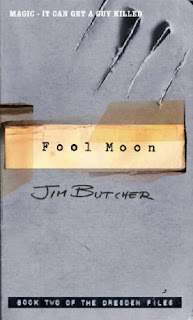 Fool Moon is a notable step up in quality from the first Dresden Files novel. The writing seems altogether more confident, the characters are better-written and the book is altogether better-paced and more enjoyable as a result. Some new characters who look likely to return in later volumes are also introduced, and Dresden starts to confront the possibility that there is some other person out there manipulating events against him, which looks set to be the beginning of some kind of long-running story arc. Butcher also shows a ruthless side, killing off a couple of recurring characters from the first novel, just to keep the reader guessing on what will happen next. 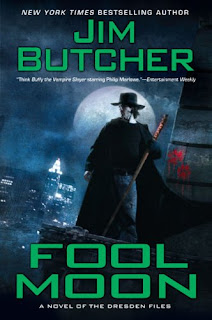 There aren't too many problems, although as with the first volume, the novel rarely rises above the entertaining popcorn level. There's also a repeat of a story element that was tiresome in the first book, namely that halfway through proceedings Dresden gets seriously injured and spends the rest of the book fighting the enemies despite suffering significant aches and pains that are described again and again in tedious detail. We get it. Dresden is overcoming serious odds to beat the bad guys. Move on. Dresden needs to either start hitting the gym or stocking up on some healing magic soon. There's also the continuing and wholly artificial distrust between Dresden and his police contact Murphy who, despite have her life saved by Dresden several times in these two books, continues to be wary and distrustful of him. Also, Butcher continues to be unsure just how widespread knowledge of magic and the occult is, with ordinary human characters varyingly reacting to the revelation of magical deeds with apathy or amazement. 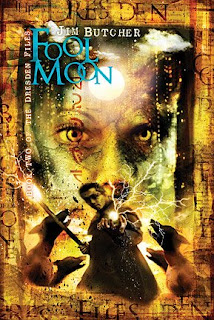 Fool Moon (***½) is a fun and enjoyable novel that shows the writer's growth in talent and ability over its predecessor. It is available now in the UK from Orbit and in the USA from Roc. The limited edition from Subterranean Press is also still available at this time of writing.
Posted by Adam Whitehead at 14:43

I really enjoyed FOOL MOON and your good review shows that it is worth to read.

I am also annoyed by the constant barrage of how much punishment Dresden can take, and still overcome the odds. But unfortunately it's a formula which Butcher employs in almost every book.

But Grave Peril and Summer Knight show a huge improvement in the series.

Hope you keep reading, I love reading your impressions on one of my favorite Authors. :)

I've been waiting for your Butcher reviews to decide if it's worth reading past Stormfront.Seeing as the series is supposed to continue to improve as it goes and you seem to have validated that I might give the rest a go.

Fool Moon is actually my least favorite of the series. I'm not sure why, maybe just because it is almost werewolf overkill. The series only gets better from here though, especially when more council business is brought up. I just posted my review of Turn Coat (Dresden 11) for anyone interested.