The State of the Art by Iain M. Banks

The State of the Art is Iain M. Banks first, and to date only, short story collection. It was originally published in 1991 and features both genre and mainstream fiction, as well as three stories set in his signature Culture setting. 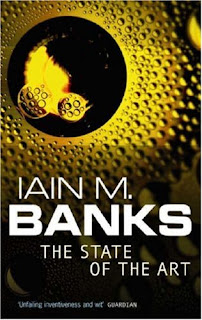 The collection opens with 'Road of Skulls', a sort of jaunty little SF-fantasy tale with a Douglas Adams-esque comic conclusion. It's fun but very slight and very short. 'A Gift from the Culture', about a Culture citizen living undercover on a recently-Contacted world, is better but a bit odd. It's not a story by itself but feels like the opening chapter to a longer novel which ends in a rather pointless and abrupt manner. Interesting, and perhaps meant to convince us that Culture citizens aren't flawless, but still not the best story I've read.

'Odd Attachment' is dark and very funny, bringing a certain Monty Python and the Holy Grail scene to mind. This film is possibly a Banks touchstone, as he both appeared in the movie (he's one of the extras in the final scene) and referenced the rabbit scene in The Wasp Factory as well. 'Descendant', the second Culture story, is a story of survival and the bond between a man and his sentient spacesuit. A macabre and most effective story.

'Cleaning Up' is brilliant, a very funny SF novel about what happens to Earth when an alien spaceship accidentally dumps a load of rejected consumer products on the planet. From the evidence presented here (not to mention the humorous streaks in his other books), Banks could do a great SF comedy, and I'm surprised he's never tried to do it at novel length. 'Piece' is more sobering, a mainstream story reflecting on terrorism and the arguments of science versus faith and God versus evolution. A very thoughtful and prescient story with a gut-punch twist ending. 'Scratch' is very weird, a stream-of-consciousness oddity which is barely readable. Not really sure what Banks was aiming for there. 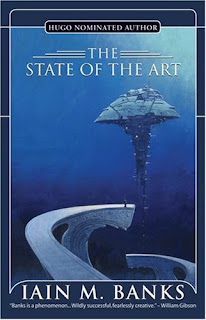 Fully half the book is taken up by the title novella. The premise of this story is very simple. The Culture's General Contact Unit Arbitrary arrives in orbit around the third planet of a remote, yellow star in the closing months of the year 1976 by the local calendar and spends the next fourteen months or so surveying the world to see if it is ready for official Contact. Much of the book is taken up by the attempts of the central character Diziet Sma to convince the Arbitrary's Mind - and thus the wider Culture - that Earth should be Contacted to prevent its inevitable slide into nuclear armageddon, whilst the Culture is more inclined to leave the planet as it is as a 'control experiment' to show the dangers faced by a nascent spacefaring civilisation. There isn't a huge amount of drama or personal jeopardy in the story, but the intellectual arguments between the two and the other characters' reactions to the situation are all handled intelligently and in a fascinating manner. The story also acts as an effective prequel to the third proper Culture novel, Use of Weapons.

The State of the Art (****) shows a broad range of Banks' writing skills and is well worth tracking down. The book is available from Orbit in the UK and Night Shade in the USA.
Posted by Adam Whitehead at 22:45

Email ThisBlogThis!Share to TwitterShare to FacebookShare to Pinterest
Labels: iain m. banks, the culture, the state of the art

I recently purchased 'Consider Phlebas' after hearing some great things about Iain M. Banks...this collection looks amazing as well - thanks for the review! : )