A new BSG comic mini-series written by Kevin Fahey (a scriptwriter on the TV show) and with the approval of the TV staff launches this month in the USA. The Final Five four-issue series will delve into the deep backstory of the TV show, taking the reader back to Kobol four thousand years before the start of the TV series and explore hitherto unrevealed information about Pythia, the Thirteenth Tribe, its exodus to Earth, the Twelve Tribes' later migration to the Colonies and the origins of the Final Five. The first few pages are previewed here. Dubious likenesses apart, it looks like interesting stuff, although I'm already hearing rumbling dissent over whether it will be considered canon or not (the Sci-Fi Channel says yes, Ronald D. Moore says maybe). 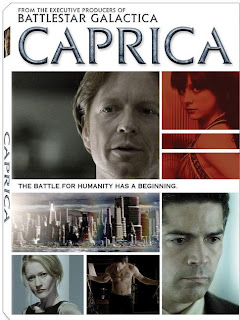 In related news, the BSG spin-off series Caprica's pilot episode hits DVD in the USA on 21 April. No word yet on a UK release. The pilot will air ahead of the main series in early 2010 on the Sci-Fi Channel in the USA and on Sky One in the UK. Meanwhile, the second half of BSG Season 4 will land on UK DVD on 1 June.

Pat Rothfuss has just announced he will be visiting Paris on 17-19 May and London on 21-25 May, and will be arranging signings whilst he's around. More news here.

I recently had the pleasure of playing in a Pathfinder roleplaying game campaign run by my friend Ben Wenham, whose adventure Skeleton Moon is being professionally published by Paizo, the team behind Pathfinder. The game is excellent, a real advance and streamlining of the D&D 3rd Edition rules-set which eliminates a lot of the crap from the rules whilst emphasising the good points. There is also a UK convention for fans of the game and roleplaying in general which will be held on 11-12 July in Birmingham. More details on Paizocon UK can be found here.