This is a hard film to write a review of, as the story is fairly confusing (buried as it is under several tonnes of heavy metal, explosions and attractive young women) and somewhat lacking in logical coherence. That's right, it's a Michael Bay movie. Sticking on one of his movies and expecting a masterpiece of scriptwriting and subtlety is clearly a doomed venture. When Bay's in the zone, he can pull off a spectacularly entertaining but brainless piece of hokum like The Rock or Bad Boys. When he isn't, he just creates a horrific mess like Armageddon and The Island, movie which are so stupid and inane they actually drain your intelligence from just looking at them. 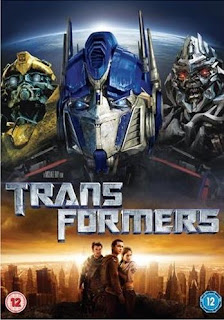 Fortunately, Transformers (2007) falls into the former category. Everyone concerned, from producer Stephen Spielberg down to the extras, seems to be aware that they are making a movie based on giant robots that turn into cars and jets and fight one another, and as such the important thing here is to have a laugh (because you could take it seriously and be respectful to the original stories, but then no-one would watch it). Hard-core 1980s Transformers fans were upset at the lack of adhesion to the established mythos in the film (although the return of original cartoon voice actor Peter Cullen as Optimus Prime did mollify them a bit). Other fans knew there had been dozens of reboots and fresh continuities for the franchise stretching back to its start and accepted the movie as yet another variation on the story. Casual cinema-goers didn't care and just sat back to enjoy the explosions.

Transformers has several things going for it. It's Michael Bay's best film by some distance (not saying much, it has to be said) and there's a solid sense of humour attached to the picture with some genuinely funny comedic moments sold by a solid lead performance by Shia LeBeouf, who manages to do some good work with some pretty ripe lines. Megan Fox is similarly inoffensive as the female lead Mikaela, whilst there are some good supporting performances from the likes of Jon Voight and Kevin Dunn. But let's be honest here, you don't watch Transformers for the human performances, you watch it for the giant robots throwing one another around, and on that level the movie is a qualified success. There's not that much Transformer carnage in the first half of the movie, probably a result of even this film's insane budget not quite being enough to cover two solid hours of CGI robot mayhem, but what there is okay. In terms of the continued development and advancement of Hollywood special effects, Transformers is probably the biggest step forward since The Return of the King.

There are problems, however. The action is impressive but Bay is paradoxically fond of both unnecessary slow-motion shots and also insane rapid-cuts. These two factors combined make it almost impossible to follow what's going on (especially on the big screen), as least not until a second or third viewing. The design of the Transformers is notable and different, but by going for a 'realistic robot' look rather than the stylised approach that every other iteration has taken to date, the robots lose some of their character and it's often hard to tell them apart from one another. Also, some of their appearances (most notably Frenzy) bring to mind Johnny Five from Short Circuit, which is not so great an association. Solid attempts are made to bring some life to each individual Transformer, but only really Optimus Prime and Bumblebee get any distinctive sense of character given to them. We know Ironhide likes to blow stuff up and Jazz likes rap music but that's about it as far as characterisation for the rest of the Autobots goes. As for the Decepticons, they're pretty much a faceless and featureless bunch, with only Megatron and Frenzy getting any sense of character attached them.

Obviously, again, we need to remember that this is a movie about giant robots blowing one another up. But the lack of decent character scenes to establish a context for the carnage makes the whole movie a pretty shallow experience. When one Transformer - whose 1980s incarnation was a firm favourite for many kids due to his distinctive characterisation in the comics and cartoon series - dies, there isn't really any emotional reaction because he was only introduced half an hour earlier and he didn't really do anything to endear himself to the audience. There's also a severe logic failure at the end of the movie when the Autobots decide to take refuge in a city rather than fight the Decepticons in the open, with the net result that lots of civilians are killed and half the city is trashed. Impressive and fun to watch, yes, convincing or logical, no.

Transformers (***) is mindlessly entertaining with some nice shout-outs to the old-school Transformers fans in the audience (some dialogue from the 1986 movie is recycled; Prime wields his energy axe from the cartoon series in one battle; and an old VW appears in one scene as a nod to Bumblebee's original form). Could it have been a lot more than the sum of its parts? Possibly, but given the constraints of budget and having to reach out to the widest possible audience, what we got wasn't too offensive. There is certainly plenty of scope for improvement in the sequel, however.

The film is available now on DVD (UK, USA) and Blu-Ray (UK, USA). The sequel, Revenge of the Fallen, hits cinemas in July.
Posted by Adam Whitehead at 23:55

Nice review Adam! I understand the budget concerns but I still felt there were too many human characters to follow and that there was a bit too much focus on them over the robots.

Any chance of a contrasting review of the animated feature? Stylistic and continuity concerns aside I maintain that the original animated film is the stronger work. If I'm not mistaken it was even Orson Welle's last film role!

Probably, although I am concerned that it would be impossible to objectively review a film I saw in the cinema as a seven-year-old and then rewatched so many times over the next few years the VHS tape got worn out. I think nostalgia would make for an unbalanced review.

Yes, it was Orson Welles' last role. He also hated it, but there you go. Leonard Nimoy and Eric Idle were also in it.

Also, the using humans as an entry point (a substitute for the reader) into the Transformers mythos is pretty traditional, but it's unsuccessful when the human characters take over the whole story. It isn't helped that most of the TF human characters have been pretty bland compared to the robots either.

Are there spambots out there that immediately attack your site the second they see you have six-figure page views? Goddamnit!

The opening scene of "Transformers", when the helicopter-bot shows up at the base (and promptly kicks ass), is one of my favorite scenes of all time.

At the same time, you have to give them credit for turning "Transformers" into another Gigantic Mega-Franchise.