Equilibrium is an SF action thriller originally released in 2002, starring Christian Bale and set in a dystopian vision of the future where humanity lives in enforced peace, strictly controlled and enforced by a drug called prozium. The theory is that 'feelings' are responsible for war, murder and mayhem, and prozium represses these. Anything that inspires feelings, such as art, literature or music, is classified as 'EC-10' and destroyed, and those who create or hoard such items are summarily executed as 'sense-criminals'. 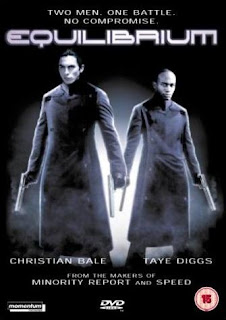 The government's will is enforced by the Clerics, elite warriors who are trained in the art of 'gun kata', a total mastery of firearms in ranged, close-quarters and melee combat. The Clerics are tasked to seek out and destroy EC-10 materials and attempt to bring down the Underground, a rebel organisation dedicated to restoring senses and feeling to humanity. When one of the Clerics is 'turned' by the Underground, his colleague Preston becomes disturbed and starts his own exploration of what it means to be human.

Equilibrium was somewhat dismissed on release for being a bit of a Matrix rip-off, with its focus on martial arts, gunplay and brooding heroes dressed in black (although Christian Bale is a considerably more intense and charismatic performer than Keanu Reeves), although Equilibrium owes a lot more to prior dystopian/utopian visions such as Brave New World and Nineteen Eighty-Four and computers do not play a significant role. Also like The Matrix, Equilibrium's premise and storyline is full of holes and if you think about it for more than a few minutes, the whole thing falls apart.

Luckily, Equilibrium works better on a thematic basis, asking some interesting (if unoriginal) questions about freedom, responsibility and consequences. It is visually arresting, and the story dodges several tedious cliches and features some genuinely interesting twists along its path. The action sequences are relatively few and brief (possibly a budgetary decision), but when they do take place they are spectacularly executed. On the acting front Christian Bale, Sean Bean and Emily Watson do some excellent work, but the film suffers from weak antagonists who do not present credible threats when stood up against the murderously efficient Preston . The ending is also bemusing, as the scale of the Underground is revealed to be so vast that it is likely they would have succeeded without Preston's intervention anyway.

Equilibrium (***) is a watchable and solidly enjoyable movie which suffers from some major logic problems, but if you can overlook those, it works quite well. The movie is available now on DVD in the UK and USA.
Posted by Adam Whitehead at 14:20

Email ThisBlogThis!Share to TwitterShare to FacebookShare to Pinterest
Labels: equilibrium

I saw Equilibrium when it came out, and seem to recall thinking it was pretty decent.

What are the holes in the premise? Can't remember enough of the film to think of them.

Well the film bases its premise on the fact that the entire population takes its medicine because, erm, it's habitual, and all it takes for the entire edifice to come crumbling down is one guy missing one dose by accident, something that statistically should happen thousands of times a day in the population. Also, given that Preston notices his colleague is acting oddly through just one slipped word, it's bizarre that it takes so long for his own colleagues to notice his own increasingly odd behaviour.

I liked this one a lot. TiVO wound up recording for me as a suggestion, which was great since I missed it when it was in theaters.

I love this movie. Its silly, but a lot of fun. How could you not like something that involves a fighting style called Gun Kata?

It's probably the best of Kurt Wimmer's efforts, which isn't really saying much.

The film had an interesting enough premise but was let down by pretty much every performance, from casting, to directing, to acting.

At least Ultraviolet had pretty colours...

I remember liking this movie as well, though its premise wasn't bulletproof. But all sci fi movies get by on the idea of the audience suspending its disbelief...some more than others.. :)

The one thing I couldn't make tally on the logic side is the thing with the switched guns - because the shooting he purportedly committed with Brandt's gun happens before he's supposed to have swapped them. So either the fact that their names are written on their guns is just pretty decoration irrelevant to the trace (I doubt it, especially given Brandt's reaction) or someone's wires got crossed somewhere.

I did like the film though, lots of fun.

I don't think that's right. They swap guns at the firing squad, then Brandt shows Preston the dogs outside, one of which Preston takes off. He comes back later that night to release the dog, but is intercepted by the security forces, which he then kills with Brandt's gun.