"Even a big bitch cockroach like you should know to never, but never, fuck with the King."
- Elvis Presley

An east Texas nursing home is the final resting place for many elderly and infirm patients, including one Sebastian Haff, an Elvis impersonator who suffered a broken hip during a concert and is now partially disabled. The staff are amused by Haff's claims to be the real Elvis, but, thanks to the power of flashbacks and the internal monologue, we see that his claims are correct. Tiring of fame and superstardom, Elvis found an impersonator who was almost his spitting double and swapped places with him in the early 1970s. It was Haff who went on to die of a drugs overdose in 1977, whilst the real Elvis went on to have a quieter, less-stressful life as an Elvis impersonator. 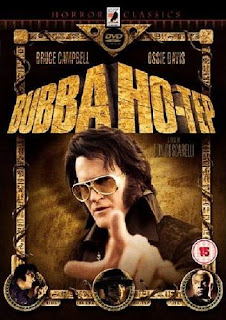 According to rumour, the next edition of The New Oxford English Dictionary simply has a picture of this DVD cover under the entry for 'Awesome'.
The film works on two levels. The first is a meditation on growing old and the melancholy that comes with that, not to mention the frustration that the young often disrespect their elders and their accomplishments simply because they need to go to the toilet a bit more often than they used to. This is emphasised in a sequence where the young daughter of Elvis' room-mate thoughtlessly throws his possessions out in the trash, including his war medals earned saving the lives of his friends. This area of the film works superbly, with Bruce Campbell an absolute revelation in a role which requires far more subtlety and emotional intensity than his normal, broader horror-comedy roles. There's also a great dynamic between Campbell's Elvis and his friend Jack (a likewise strong performance from Osse Davis), who claims to be John F. Kennedy. Instead of dying in Dallas, he claims to have survived, been dyed black by Lyndon B. Johnson and left to rot in the nursing home (unlike Elvis, it isn't revealed if this is the 'real' JFK or not). Elvis' scepticism is tempered by his acknowledgment of his own unlikely story of survival.

"Ask not what your rest home can do for you. Ask what you can do for your rest home."
"Hey! You're copying my best lines"
"Then let me paraphrase one of my own: let's take care of business."
"Just what are you getting at, Elvis?"
"I think you know what I'm gettin' at, Mr. President. We're gonna kill us a mummy."
- Elvis Presley and John F. Kennedy (presumed)

The second level is much more straightforward: Bubba Ho-Tep, an ancient Egyptian mummy, has been reanimated and has invaded the nursing home to feed on the souls of the living, draining them out through it's victims' backsides. Seriously. It is up to Elvis and JFK to eliminate the mummy before it wipes everyone in the rest home out.

The difference between the quiet, contemplative meditation on old age and dignity, and the slash-horror of the mummy's killing spree is fairly pronounced, but it works brilliantly, sold by good writing, terrific performances, limited but effective sfx and a superb musical score. The daft premise is treated with utmost seriousness by everyone involved and it works very well.

Bubba Ho-Tep (*****) is a bit of an oddball movie, at turns reflective, quiet, hilarious, action-packed, horrific and thoughtful. With solid direction (from veteren horror director Don Coscarelli, direct of the Phantasm series) and great acting, it is more than worth an hour and a half of your time. The movie is available now on DVD in the UK and USA.
Posted by Adam Whitehead at 17:16