First up, the US cover art for The Orders of the Scales, due in Spring 2012: 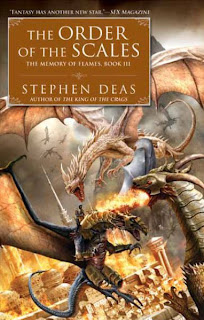 Also, the Larry Rostant cover of The Middle Kingdom, the third of the Chung Kuo reissues. Originally, this was the title of the first book when the original eight-volume version of the series was released in the 1990s, but has been pushed back to third place by the issuing of two new, original prequel novels, Son of Heaven (out now) and Daylight on Iron Mountain (due in November). Oddly, The Middle Kingdom won't be out until August 2012. Considering that all twenty books in the series are supposed to be out by June 2015, they're going to start having to pick up the pace. 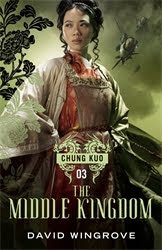 Email ThisBlogThis!Share to TwitterShare to FacebookShare to Pinterest
Labels: chung kuo, cover art, david wingrove, stephen deas, the memory of flames, the middle kingdom, the order of the scales

That Deas cover I like! I won't say you can't go wrong with a dragon, because you can, but that artist did a nice job, IMOHO.

actually the august date makes sense if they are going for a 6 book a year release schedule, books 3 releases August 2012, and this puts book 20 exactly at June 2015 (a book every 2 months, the only thing i don't understand is why put such a long gap between 1, 2 and 3

It's possible that they left some space in there to see how 1 and 2 did before committing to the full roster. Luckily, 1 has sold very well indeed (or so I understand), so it seems to be full steam ahead.