The abandoned and fallow ocean world of Kithrup, AD 2489. The predominantly dolphin-crewed starship Streaker has sought refuge deep underwater whilst pursuing armadas belonging to dozens of major Galactic races clash in the skies overhead, each fighting for the right to capture Streaker and the secrets she possesses. Streaker has found a fleet of abandoned starships in a globular cluster that date back to the time of the fabled Progenitors, and there are races willing to commit murder and genocide to learn more about the birth of intergalactic civilisation. The crew of the Streaker will have to call upon all their resources and cleverness if they are to escape from Kithrup, but the crew itself is divided over the course of action to take, and the planet itself harbours dark secrets of its own. 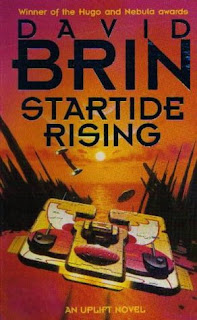 Startide Rising was first published in 1983 and is one of the rare SF novels to 'win the double', securing both the Nebula and Hugo Awards for Best Novel, a feat also achieved by Dune, Neuromancer, Doomsday Book, Rendezvous with Rama and Ender's Game. It's one of the best space opera novels published in the last thirty years and is probably the most advisable starting point for reading Brin's Uplift Saga (the first book, Sundiver, is the weakest in the series and has little to nothing to do with the other five books, though still a reasonably entertaining novel on its own merits).

The book is notable for being a space opera where most of the action takes place deep underwater, and where humans are in the minority as characters. Most of the cast are neo-dolphins, 'uplifted' from animals into sentient beings. They are mostly at home in the water, but have cybernetic walkers to allow them to interact with humans on dry land. Because dolphins are a new addition to the ranks of uplifted races they are also a tad of the flaky side, and several subplots in the books follow the problems caused when some of the dolphins' conditioning fails in the face of stress and they revert into mindless animals (especially dangerous for the ones that have elements of more hostile aquatic species spliced into their genetic code). Brin puts a lot of work into the dolphin society, organisation and language (the dolphins have a haiku-like way of speaking which bridges their primal language of squeaks, clicks and sonar and the human language, Anglic) and it's extremely convincing. The premise - talking space dolphins! - could veer into silliness very easily, but Brin overcomes this by simply taking the subject seriously, though injecting a lightness of tone into proceedings to reflect the playful nature of the species. 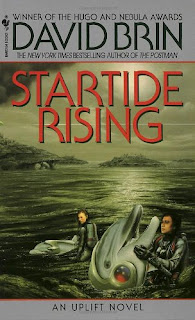 The character-building is strong. The neo-dolphin captain, Creideiki, is developed as a philosophical warrior who has developed a personal code of combining the best traits of his pre-sentient ancestors with things they have learned from humanity, rather than valuing one above the other as some of his other crewmembers do. Similarly, many of the other dolphins are painted distinctly with their own personalities, goals and motivations, some of them in conflict with one another. The other crewmembers of Streaker - seven humans and a neo-chimp - also come across well, though they fall into broader archetypes than the dolphins: the befuddled professor, the morally ambiguous and ambitious scientist, the hotheaded young kid who discovers responsibility and maturity and so on. Still entertaining, but it is interesting that the human characters come across as slightly broader than the dolphin ones. I was also surprised that some characters who play major roles in later books barely even appear in this one.

The book is broken up by interludes focusing on the various alien races battling for control of the planet: the humourless but honourable Thennanin, the avian Gubru, the rapacious Tandu, the cruel Soro, the weird Jophur (a race of hostile stacked donuts!) and so on. Brin doesn't have much time to do more than characterise these races in the quickest of strokes and they lack real depth, something I suspect Brin realised as subsequent books flesh out various of these races in more detail (the Gubru and Thennanin in The Uplift War, the Jophur in Infinity's Shore and so on). However, they are in the book primarily to provide an impetus for the Streaker to get away, and the regular switches away to their POVs keep us updated on the course of the battle and how much time the Earthlings have before one of the alien races triumphs and is able to pursue the Streaker. It's an effective way of building tension, especially as the novel moves into is climactic stages and the author puts his foot down in the run-up to the finale.

Essentially, Startide Rising is a big, brash, colourful and fun space opera. He addresses some interesting and real scientific issues and concerns (the need for the Galactics to be ecologically aware to avoid 'burning out' their galaxies of habitable planets in just a few tens of millennia is touched on, though lightly enough not to get preachy), but his main objective is to entertain, and he does that in spades. The structure of the series means that a number of storylines are left hanging at the end of Startide Rising which aren't revisited until the fifth book, which isn't a problem now but was a bit more unusual at the time (especially as the fifth book wasn't published until fifteen years after the second), but these hanging elements are more, "What adventures will they have next?" rather than cliffhangers. The book does a good job of standing alone, whilst the subsequent book, The Uplift War, shows the fall-out of events in this novel on Earth and her colonies, but also works more or less as a stand-alone.

Startide Rising (****½) is a tremendously readable, entertaining and smart novel that takes a wild premise and runs with it. The novel is available now in the USA, though is currently not in print in the UK (Amazon has some second-hand copies).
Posted by Adam Whitehead at 16:38

This book was one of my favorites growing up in the 80s… A question: (spoiler warning) Did Brin ever revisit the "castaways" from the end of the book? I don't remember if they ever showed up in later volumes of the series.

I must admit I can't remember either. I'm reading the whole series (maybe with a short break halfway through), so I guess I'll find out soon enough :)

I think you've convinced me that i need to re read the whole saga.