A History of Epic Fantasy - Part 32

In 1998 Orbit Books in the UK published the debut novel by a new author: Colours in the Steel. The first volume of The Fencer Trilogy, it was very well-received. However, the author, K.J. Parker, declined to tour or do any public appearances for the book. Interviews were conducted only online by email. 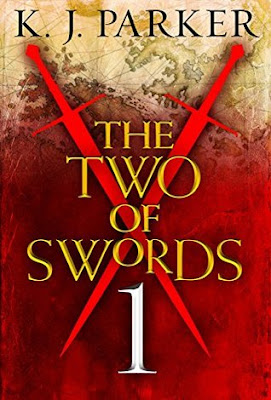 As the years passed, Parker's output became ever more critically-acclaimed. Orbit began publishing the novels in the United States to growing sales and critical acclaim, whilst the small Subterranean Press began publishing acclaimed editions of Parker's novellas and short stories. This culminated with back-to-back World Fantasy Award wins in 2012 and 2013 for the novellas A Small Price to Pay for Birdsong and Let Maps to Others. The mystery of "Who is K.J. Parker?" went from a minor meme to a major fantasy mystery, with bloggers posting detailed guesses of who the author might be.

Finally, in 2015, the author came clean. K.J. Parker was really Tom Holt, a bestselling British comic author. It had actually been a popular guess for a few years that Parker and Holt were the same person, so it wasn't a major surprise.

Tom Holt (born 1961) published his first novel, Expecting Someone Taller, in 1987. The novel was about Malcolm Fisher, an auction clerk, who inadvertently kills the giant Ingolf (in the form of a badger), keeper of the Ring of Nibelung and the Tarnhelm. Coming into possession of these items, Fisher becomes King of the World, to the irritation of Wotan (Odin), King of the Gods. The result is a comical farce involving Norse gods, valkyries and Rhinemaidens.

Holt published fourteen novels and a satirical autobiography of Margaret Thatcher over the next eleven years, but always had a hankering to write something more serious. In 1989 and 1990 he published two novellas, Goatsong and The Walled Orchard, under the cunning and impenetrable pseudonym of Thomas Holt. In 1997 these were combined into a novel, The Walled Orchard, which was well-received. The book focuses on the real (if highly enigmatic) Eupolis of Athens, a playwright who is living in incredibly dark times (the Peloponnesian War of the late 5th Century BC) and can only get through them by writing comedies and using humour to try to deflect the misery of the period. The book also focuses on politics, love and the absurdities of war.

The book was well-received, but it was noted that it was very different from Holt's other work. So Orbit hit on the idea of launching Holt as a "new" author under a slightly more original pen-name, K.J. Parker. Colours in the Steel

The Fencer Trilogy is the story of Bardas Loredan, fencer-at-law. In the first novel (1998) he is serving as a lawyer in the triple-walled city of Perimadeia, where the advocates fight with swords rather than words and arguments. A particularly tricky case is complicated when the "savages" of the plains somehow develop siege weapon technology (they just come into the city and work in the armoury for a bit and steal all of the ideas) and besiege the city. Bardas is drafted to help with the defence, to his despair.

The Belly of the Bow (1999) focuses again on Bardas, this time returning to his home island to find his dysfunctional family (this is a major, major understatement) embroiled in a local civil war. This book is about longbows and shortbows and focuses on the idea that a bow is a supreme weapon because it can bend and flex...right up to the point where it snaps. The novel climaxes with a moment where Bardas snaps (in a moment that out-Red Weddings the Red Wedding before the Red Wedding ever appeared in print) and the reader is forced to confront the possibility that they've just spent two novels rooting for a guy who is a complete psychopath. As a moment of character reversal and revelation, it is supremely well-handled, and arguably marked the point where the name "K.J. Parker" went from "just another fantasy author" to "something special." This process continued in the third volume, The Proof House (2000), based around the forging of armour, in which our battered protagonist tries to find a new home in a vast, rapidly expanding empire. The trilogy as a whole is fantastically characterised and is heroic without aggrandisement, cynical without despair and realistic without bitterness.

Following the Fencer Trilogy, Parker followed up with the Scavenger (2001-03) and Engineer trilogies (2005-07). The former is about a man who wakes up with amnesia and has to survive whilst being pursued by enemies he doesn't know for deeds he cannot remember. The latter focuses on an engineer in exile who plots a complicated revenge on those who wronged him.

After that work Holt switched to writing stand-alones. The Company (2008), The Hammer (2011), Sharps (2012), Savages (2015) and The Two of Swords (2015), the latter published as a serial, all showcase Holt's wit, keen observation of character and event. However, it was his 2009 novel The Folding Knife that arguably encapsulates his work the best. 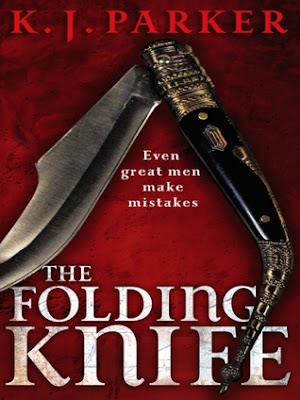 The Folding Knife is set in the Vesani Republic, the closest analogue to Republican Roman in Holt's world (all of his books take place in the same world, but at wildly varying points in its history with different levels of technology and different borders and absolutely no maps). The book follows the story of Basso, First Citizen of the Republic, who achieves his position thanks to his supreme skills of diplomacy, economics and politics. However, his inability to create a happy home life and his inability to mend a long-simmering feud with his sister both distract him. As his career progresses, so does his arrogance and overconfidence, resulting in disaster.

On the one hand this is a pretty straightforward novel about hubris. But on a deeper level it's an exploration of family, of responsibility and how not having to see violence or conflict first-hand makes it easier to start wars and send people off to die when you don't have to live with the consequences. It's also a book about economics, and Basso's ability to keep borrowing long past the Republic's ability to pay through creative accounting makes one suspect that this novel is also riffing off the 2008 global financial crisis, which would be a rather different source of inspiration for a fantasy novel.

It's the most contained and representative of the Parker books and makes a fine place for a reader new to this author to start.


Holt is one of a small number of authors who asks an important question about epic fantasy, a genre that likes to steep itself in realism when it comes to determining how many miles an army can cover in a day (less so about how a 30-ton reptile can stay in the air without adequate life-generating wings): how the hell does anyone pay for these massive mile-wide castles, vast numbers of troops and hire expensive mages with unique (and therefore expensive) powers?
Posted by Adam Whitehead at 12:03

Email ThisBlogThis!Share to TwitterShare to FacebookShare to Pinterest
Labels: colours in the steel, engineer trilogy, history of epic fantasy, k.j. parker, sharps, the fencer trilogy, the folding knife, the hammer

The Vesani Republic is a much closer analogue to medieval Venice than to Republican Rome.

This series must be published in book form. Ebook and hardcover. Please.

Ebook yes, much bigger and in more depth. Hardcover? Only if a publisher is interested.

Actually, the Folding Knife was the one book of his that I just abandoned. I found the plot interesting but the main character was so weak and unlikable for me that it killed my interest in the book. The protagonist is so pussy whipped by his sister (Not in a Lannister fashion) and frankly inconsistent that I couldn't follow him. I felt like the story summary promised one person and the book actually delivered someone else, someone...less.